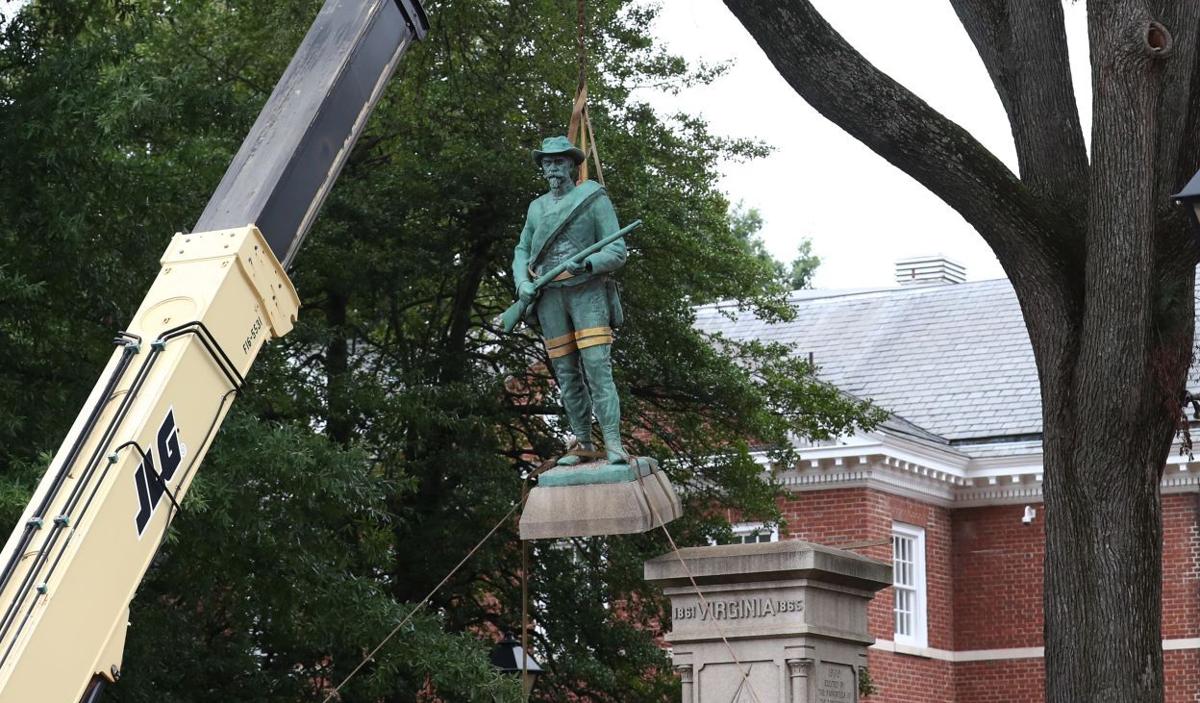 A bronze statue of an unnamed Confederate soldier, titled "At Ready," is removed Saturday outside of the Albemarle County Circuit Courthouse in downtown Charlottesville. 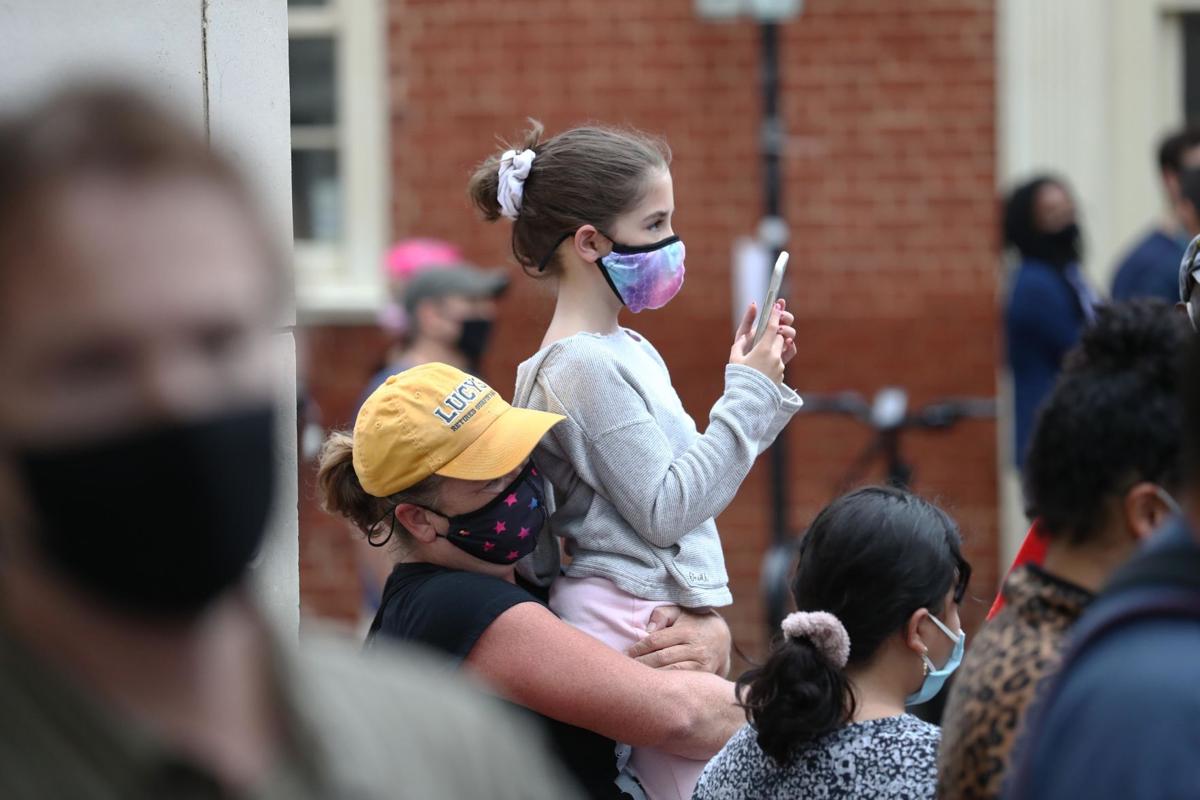 A young girl uses her phone to record the removal of the statue.

After nearly two hours of drilling, lifting and adjusting, the “At Ready” Confederate statue in front of the Albemarle County Circuit Courthouse was taken down to the sounds of cheers Saturday morning.

More than 100 people gathered to watch the statue removal, including current and former elected officials, local activists and community members.

The removal follows the violent Unite the Right rally in Charlottesville in 2017, and years of the county seeking control of the monument from the state.

Ned Gallaway, chairman of the Albemarle Board of Supervisors, said the overwhelming sentiment of area residents during the community engagement process leading up to the removal was that the courthouse property should “be welcoming, inclusive and a place for justice for all.”

“As our predecessors did, we, too, with purposeful intentions, choose to create a new point in our county’s history, and choose to redefine this place of significance to represent the values of all members of our community,” he said.

Gallaway was joined at the removal by Supervisors Diantha McKeel and Donna Price.

The statue, two cannons and a pile of cannonballs were removed by early afternoon Saturday, and were taken by the Shenandoah Valley Battlefields Foundation, which was selected to receive the statuary by the board on Tuesday. In the foundation’s request, it said it will put the statue and its accessories on one of its battlefields.

Representatives from the foundation did not respond to multiple requests for interviews over the last week.

Despite Albemarle County’s efforts to keep people away from the event with a livestream of it and closures of the roads, the public sidewalk was open and spectators gathered to watch history being made. Spirits were high, and onlookers played music and sang.

The construction started at sunrise, but viewers gathered earlier and nearly 40 people were there when the project began.

Don Gathers, a local activist and former chairman of Charlottesville’s Blue Ribbon Commission on Race, Memorials and Public Spaces, said he felt “truly blessed and fortunate” to see the statue come down, and that this was a small step, but progress.

“Hopefully, this is just the beginning,” he said. “This has been a long time coming, but there’s still five more [statues] in the immediate city of Charlottesville that need to come down, as well,” he said, referring to the statues of Robert E. Lee, Thomas “Stonewall” Jackson, George Rogers Clark, Thomas Jefferson and one of Meriwether Lewis, William Clark and Sacagawea.

After a petition by then-Charlottesville High School student Zyahna Bryant to remove the city’s Lee statue, the City Council set up the blue ribbon commission, and ultimately voted in February 2017 to remove the Lee statue. Shortly thereafter, the council voted to remove the Jackson statue, as well.

Albemarle’s elected officials were slower than the City Council to publicly discuss its confederate statue, and the county received little to no public attention around its statue in 2016 or 2017.

In October 2018, a petition was started by Albemarle resident Matthew Christensen to remove the monument to Confederate soldiers from the courthouse property as soon as possible.

The next month, the Board of Supervisors considered adding a request for local authority for decisions around statues and monuments to its legislative priorities, which the supervisors ultimately requested ahead of the 2019 and 2020 General Assembly sessions.

Former Del. David J. Toscano, D-Charlottesville, introduced legislation in both the 2018 and 2019 sessions that would have allowed localities to remove war monuments, but the bills died early in each session. Del. Sally Hudson, D-Charlottesville, sponsored a bill earlier this year that was incorporated into other local control-related bills, and ultimately was signed into law.

Toscano, who stopped by Court Square on Saturday, said he wasn’t surprised that legislation for monument removal was approved this year.

“I think people were ready to have it passed, and once you had the Democrats take over, I didn’t think it would be much of an issue after that,” he said. “I think if Aug. 12 had not happened, and Democrats had taken control, I’m not sure it wouldn’t have passed anyway, but once Aug. 12 happened, I think that was it.”

Hudson was also at the removal, and said over the county’s livestream that her actions were “just one small leg in this long race.”

“I know the statue sits on county property, but it’s a clear reminder that we are one Charlottesville-Albemarle community and the city and county have undertaken this struggle together,” she said.

In January, the county announced it was starting a community engagement process to help better tell the history of the county’s property in Court Square.

Gathers said he thought that the removal was a byproduct of some of the work of the city’s blue ribbon commission, as well as a community civil rights pilgrimage in 2018.

“It would really be appropriate if we just had numerous chains and allowed the activists in there, and they each get a pull,” he said. “That would just be glorious, but, you know, whatever works at this point.”

Workers first removed the two cannons that straddled the base of the statue, then moved to the soldier itself. Lastly, the soldier’s base and the cannonballs were removed.

The process to remove the statue off its base Saturday was slow, as the highest block on the pedestal was attached to the bronze figure. Construction workers attempted to separate the two pieces but were unsuccessful and removed both at the same time.

Albemarle resident Frank Dukes said he hopes the statue removal is representative of the commitment to racial equity the community has made and that Albemarle is making. He said he was “super excited” to be able to see that change can sometimes happen.

In 2017, Dukes, also a former member of the city’s blue ribbon commission, encouraged the county Board of Supervisors to participate with the city in the Equal Justice Initiative’s Community Remembrance Project. The board in 2019 approved the marker on the courthouse property and the county participated in the project with the city and other groups.

“Actually, for me, this is the most egregious statue in the whole community because of where it’s located, that it’s such a symbol of injustice in front of the courthouse,” he said. “But I think for so many other people, the prominence of the Lee statue and the Jackson statue, as opposed to this one, which is sort of a cheap model, might make a difference. I think it’s taken longer for the county residents to really focus on this.”

The Board of Supervisors started the process of considering what to do with the county’s statue on July 1, the first day allowed under the new state law. In August, the board voted unanimously to remove the statue and on Tuesday it voted unanimously to give the items to the battlefield group.

Jalane Schmidt, a local activist and University of Virginia professor who leads tours of Court Square and advocated for local control of monuments, said she felt gratified because the day was the result of a lot of work by a lot of people, but that that feeling was tempered by a concern about where the statue was headed.

“It feels something like we’re shipping our toxic waste to another community — we’re washing our hands of it, that we’re sending it down the road to pollute another community, or, in this case, increase the littering of the landscape with Lost Cause emblems, and so that’s of concern to me,” she said. “I think it’s a cautionary tale. I think the city and the university need to pay attention to this and to think very carefully about where they’re going to send their statues, when they get rid of them.”

Charlottesville cannot yet start the removal process for its Lee and Jackson statues due to a still-pending lawsuit.

“It’s ironic that the first statue that comes down is not the one that has been most controversial in the city, but the one in the county,” Toscano said.

When the final slab just above the buried foundation of the statue was removed, large bugs scattered out, and a time capsule was revealed in a hole in the center of the concrete.

UVa’s Special Collections is going to review the box to see if its contents are salvageable.

A bronze statue of an unnamed Confederate soldier, titled "At Ready," is removed Saturday outside of the Albemarle County Circuit Courthouse in downtown Charlottesville.

A young girl uses her phone to record the removal of the statue.