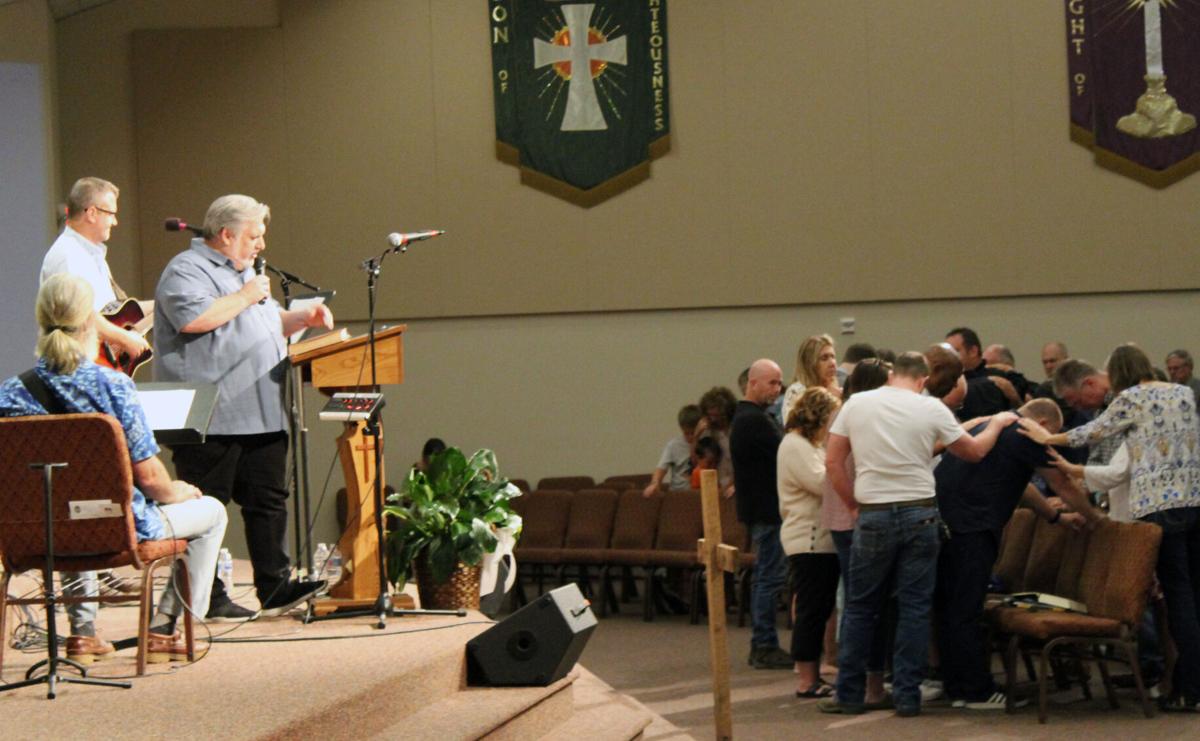 Shane Lilly, left, a pastor at Church on the Hill in Fishersville, leads a prayer at Wayne Hills Baptist Church in Waynesboro on Tuesday night for the Augusta School Board members and that they do not allow transgender students to use restrooms and locker rooms matching their gender identities in public schools. 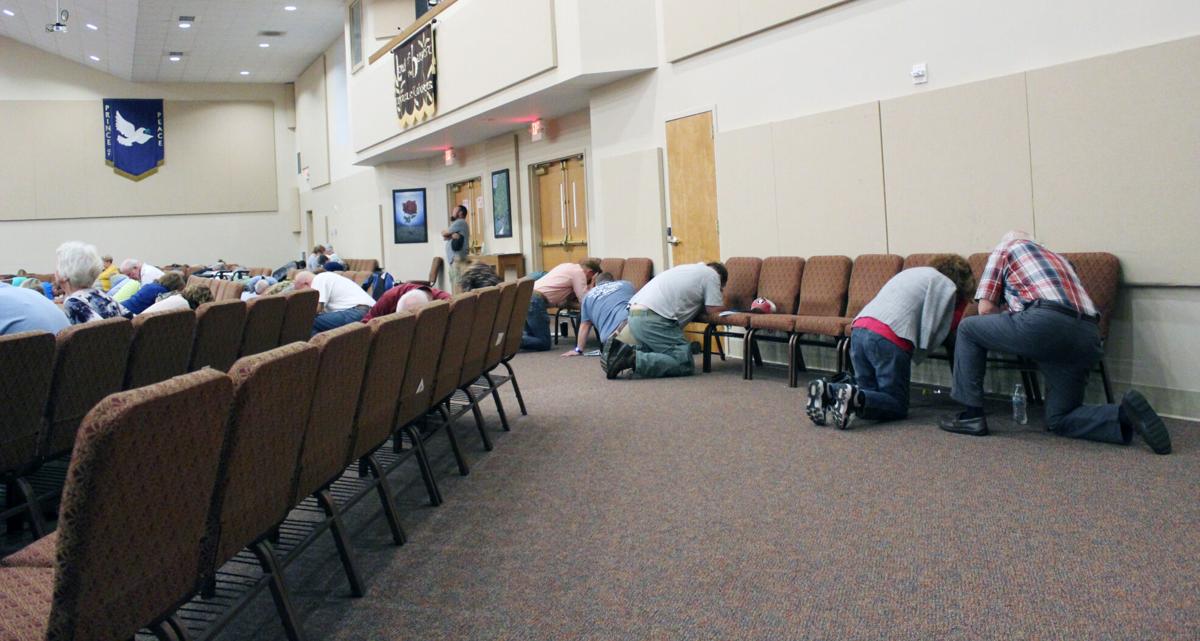 People pray at Wayne Hills Baptist Church in Waynesboro on Tuesday night for the Augusta County School Board members and that they do not allow transgender students to use restrooms and locker rooms matching their gender identities in public school.

With a decision on transgender policies pending by the Augusta County School Board on Aug. 5, Wayne Hills Baptist Church in Waynesboro hosted an evening of worship Tuesday that brought together several local churches and faith leaders to pray for elected officials and their decision.

The county school board previously tabled the discussion at its July 1 meeting following an hour of public comment. Almost every speaker disagreed with the proposed policies, which add language related to transgender students and bullying.

Speakers at Tuesday’s church meeting spoke about uplifting future generations, elected officials and fellow churches and pastors in prayer, as well as the board members as they make a decision about the county’s transgender policy.

A common theme throughout the night was the desire for the Holy Spirit to change the hearts of elected officials and allow for the proposed policies to be rejected. Wayne Hills lead pastor Jamie McClanahan encouraged Christian leaders to fight against policies that oppose the Bible, including policies that allow transgender students to use restrooms and locker rooms matching their gender identities.

“We have the responsibility to stand up for what is right in the right way,” McClanahan said. “I hope that church leaders understand that we cannot be dormant in our doctrine anymore. We can’t be docile in the way we’re engaging our world. We have to step up and be the example for others.”

Mark Wingfield, the pastor of First Baptist Grottoes and a News Virginian columnist, said the prayers for elected officials, despite their differences, were an act of obedience to God, citing 1 Timothy.

“We’re supposed to pray for kings and anybody that is placed in high positions, knowing that it is God who placed them there in the first place,” Wingfield said. “It’s God who has told us to respect the office and the people who are in it. We don’t agree with all their policies, their politics, or often what they do in their personal lives, but we are still told to pray for them.”

Josh Hetzler, legislative counsel with a faith-based nonprofit called The Family Foundation, spoke to those in attendance about the issues he saw with the Virginia Department of Education’s guide to the model treatment of transgender students, which he said were unlawful.

“If these policies pass, they will turn everything on its head,” Hetzler said. “It flips the switch on reality and dares to enclose that on every person. It says to every person that you better fully embrace it, or you’re going to be canceled, essentially.”

The state’s policies end up taking privacy away from students and limit’s the role parents have in teaching their children their values because members of the opposite biological sex will be able to use the same restroom or sleep in the same room as other students on a school trip without a parent’s knowledge or consent, according to Hetzler.

“The reality is that we’re being asked to speak something that is fundamentally untrue,” Hetzler said. “And not only is it untrue, but it’s something that goes back to mankind who are made in the image of God.”

Hetzler and the Founding Freedoms Law Center filed a lawsuit against the Virginia Department of Education seeking an injunction against the implementation of the state’s new policy on transgender children in late March.

Wayne Hills associate pastor Will Soto said churches should “open their tables” to those on the other side of the issue to attempt to learn from them in an exchange he said should lead to compassion that will help both sides better navigate the conversation.

“It keeps us from slandering the word [of God],” Soto said of the need to engage with the community even in times of disagreement. “We need to represent the fullness of ideas whether we agree with them or not. If we’re not willing to sit and talk with those who disagree with us, I think we’ve already taken that first step towards dehumanizing them.”

This is all a way for churches to love their neighbors despite differences of fundamental viewpoints, Soto said.

“Let’s have a conversation, and even if we agree to disagree, I want to extend love to you by sitting with you, learning from you, and hearing from you,” he said. “And then maybe learn some ways we can partner together in helpful ways.”

Virginia’s Coalition of Small and Rural Schools continued its “crumbling schools tour” this past Tuesday with a school-wide tour of Waynesboro High School.

RISE celebrates the end of its 22-day summer school program

The students, ranging from kindergarten to 7th grade, and their families gathered to send off the 22-day program.

Shane Lilly, left, a pastor at Church on the Hill in Fishersville, leads a prayer at Wayne Hills Baptist Church in Waynesboro on Tuesday night for the Augusta School Board members and that they do not allow transgender students to use restrooms and locker rooms matching their gender identities in public schools.

People pray at Wayne Hills Baptist Church in Waynesboro on Tuesday night for the Augusta County School Board members and that they do not allow transgender students to use restrooms and locker rooms matching their gender identities in public school.