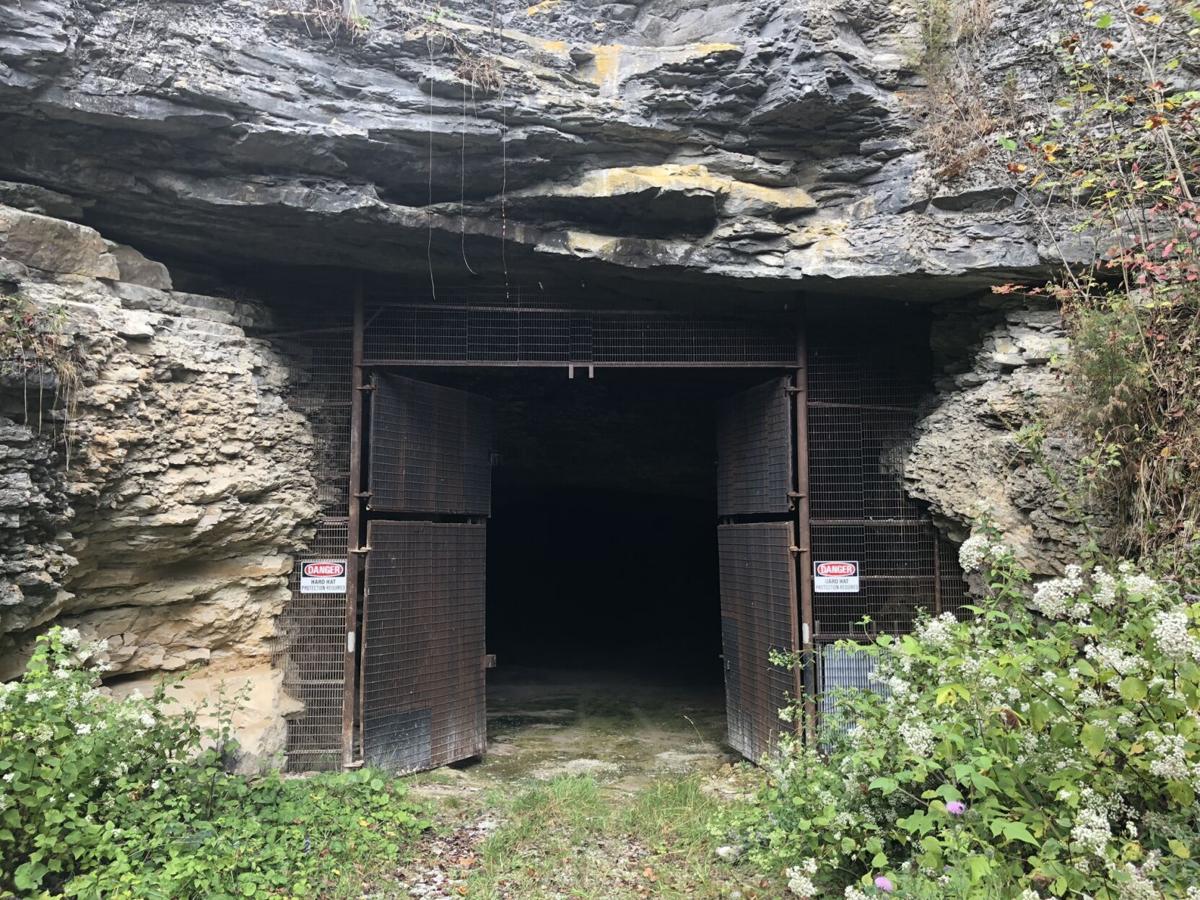 The entrance to a vacant limestone mine in Scott County. This mine is one of a handful of sites in Southwest Virginia that has been evaluated as being suitable for a data center. 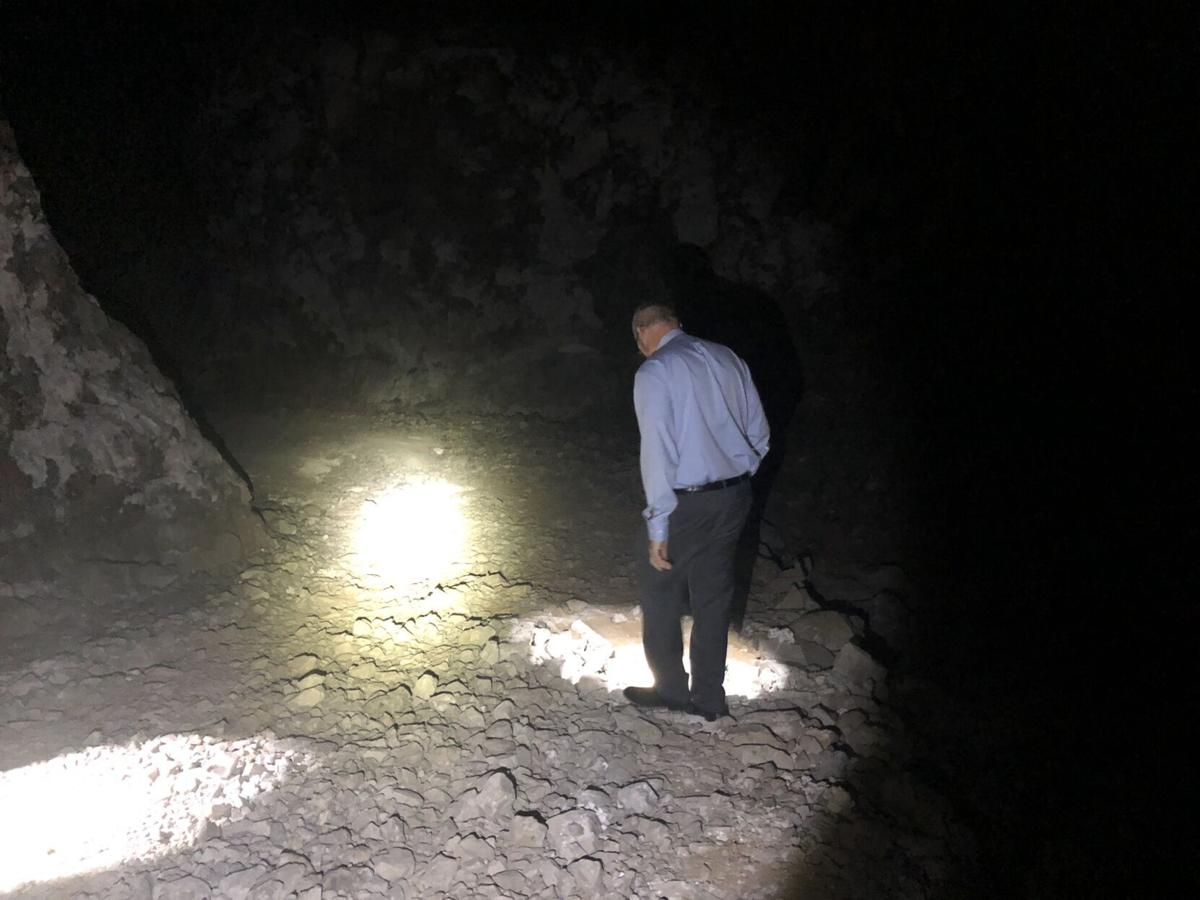 Rep. Morgan Griffith, R-Salem, uses a flashlight to guide himself through a vacant limestone mine in Scott County.

It’s pitch black and silent a few hundred feet underground this tomb-like mine shaft. There’s no breeze, but it’s cool.

Besides some troublemakers who have broken through the chains on the gate, it’s hard to locate the entrance to this mine off a road in Scott County. The limestone mine is empty. It’s cavernous and the ceiling is high — no need to duck walk. A pickup truck could drive through some parts. In certain rooms of the mine, a two-story house could fit into it.

“That’s what makes this so valuable,” Rep. Morgan Griffith, R-Salem, said while on a 2019 tour of the mine. “The space, the privacy.”

Some economic development and mining industry leaders think they’ve come up with an idea of what to do with mines like these that are empty but still full of potential.

They want to put data centers in them. And those who work in the energy and technology industries say they think Southwest Virginia has an opportunity to leverage its natural resources in a way that makes the region a promising location for future data centers.

“The infrastructure that we have, including land, power, broadband, water assets and geothermal cooling technology, make the region a strategic location for data centers,” said Del. Israel O’Quinn, R-Washington. “We can do something here no one else in Virginia can do.”

Attracting data centers to Southwest Virginia is one of the goals of InvestSWVA, a marketing initiative that launched over a year ago to attract economic development projects to the region.

Data center companies typically build and operate nondescript buildings that house generators and racks of computer servers storing and processing information for tenants like Facebook, Microsoft and Amazon. Too keep machines from overheating, data centers have cooling systems that contribute to a massive consumption of energy.

As data centers look to reduce their carbon footprints and seek renewable energy sources to power their facilities, this is where mines like the one in Scott County can be useful. The temperature of the mine will stay constant at 55 degrees. There’s about a 2-acre lake at the bottom of the mine. The goal is to build a system so the water can be used for cooling the data center, which would significantly reduce operational costs.

“Our mines have made Southwest Virginia nature’s refrigerator,” Griffith said.

The idea is to line the walls of the mine with racks and racks of blinking computer servers.

This mine is just one of six sites that a firm hired to study this initiative have found meet the criteria — including internet connectivity, cost and availability of electricity, and business climate — to support large data centers. Another four sites could be suited for a smaller data center.

“We’ve got a real opportunity to reimagine our economy,” said Mike Quillen, a former coal executive and current chairman of the Southwest Virginia Energy Research Authority, which is focused on promoting new energy development in the region once known for its booming coal industry.

Far Southwest Virginia already has three data centers — in Scott, Russell and Wise counties — and there are more than a dozen others scattered across the commonwealth outside of Northern Virginia.

Northern Virginia is the national hub for the data center industry. Data centers bloomed there because of the relatively low power rates, a highly educated workforce and nearby customers, like the federal government. Their centers’ proximity to its customers helps shave off milliseconds from the time they take to transmit data.

The pandemic has shifted more and more work and play online, which means businesses and people are gobbling up more data. The need for more data capacity has been a boom for the data center industry.

“As that occurs, you’re seeing a lot more positioning between states and localities across the country in trying to draw more data center investment and jobs,” said Josh Levi, president of the Data Center Coalition, a Northern Virginia-based trade association for the data center industry.

The General Assembly is considering a couple bills intended to incentivize more growth of data centers in Virginia, and the further expansion of them into regions like far Southwest Virginia. They would loosen guidelines around the sales and use tax exemption to encourage companies to build data centers in economically distressed areas.

Sen. Jeremy McPike, D-Prince William, is patroning one bill to do this along with a bill to eliminate the coal tax credits aimed at boosting coal mining in Virginia. The Joint Legislative Audit and Review Commission, the legislature’s oversight commission, issued a report last year recommending the elimination of the coal tax credits because they are one of the state’s largest incentives to promote business growth, but have generated economic losses for the commonwealth.

“We really want to look at the ways we invest our dollars when investing, and if we’re going to eliminate the coal tax credits, we also want to find ways to invest and focus our efforts on Southwest and Southside Virginia in the distressed areas,” McPike said. “If we’re going to phase out one tax credit, we need to retool and figure out how to invest wisely.”

States view data centers as attractive industry because they require a lot of initial investment and additional investment over time to replace equipment. While data centers don’t yield many jobs after construction is complete, they are a valuable source of revenue with property taxes.

McPike’s bill, and another from Sen. Frank Ruff, R-Mecklenburg, are trying to address the job creation threshold that data centers have to meet in order to qualify for the sales and use tax exemption. A JLARC study said that job creation requirement has been a barrier to data centers setting up in distressed areas because of a lack of workers with the necessary skills to work at these facilities.

Those working on luring a data center to far Southwest Virginia said tweaking the tax policy will be key in making the region more attractive.

“We want to pave the way for Southwest Virginia to be the next hub for data centers,” O’Quinn said.

The 371-acre Mill Place Commerce Park’s concept plan was adjusted by a 7-0 vote to shift away from residential, office or warehouse uses in favor of large-scale manufacturing and research and development.

Augusta County students now have the chance to attend school in person four days a week beginning in April.

An Augusta County deputy is on administrative leave Monday after unintentionally discharging his firearm while apprehending a suspect in a pursuit.

May municipal elections could be a thing of the past in Waynesboro if Gov. Ralph Northam signs a bill implementing the change.

The Fort Defiance Academic Team are undefeated in competition this year so far.

Making an appointment to receive the COVID-19 vaccine at Augusta Health just got a bit easier.

The death of Adam Oakes, a 19-year-old student from Loudoun County, led to the suspension of VCU’s chapter of Delta Chi fraternity.

Patrons of the Waynesboro Post Office may notice a new addition out front.

Culpeper man killed at his home by deputy was father, husband, Army veteran

Welfare check called for 44-year Donald Hairston, of Culpeper, an African-American who authorities say was armed and pointed gun at them before he was fatally shot.

The entrance to a vacant limestone mine in Scott County. This mine is one of a handful of sites in Southwest Virginia that has been evaluated as being suitable for a data center.

Rep. Morgan Griffith, R-Salem, uses a flashlight to guide himself through a vacant limestone mine in Scott County.