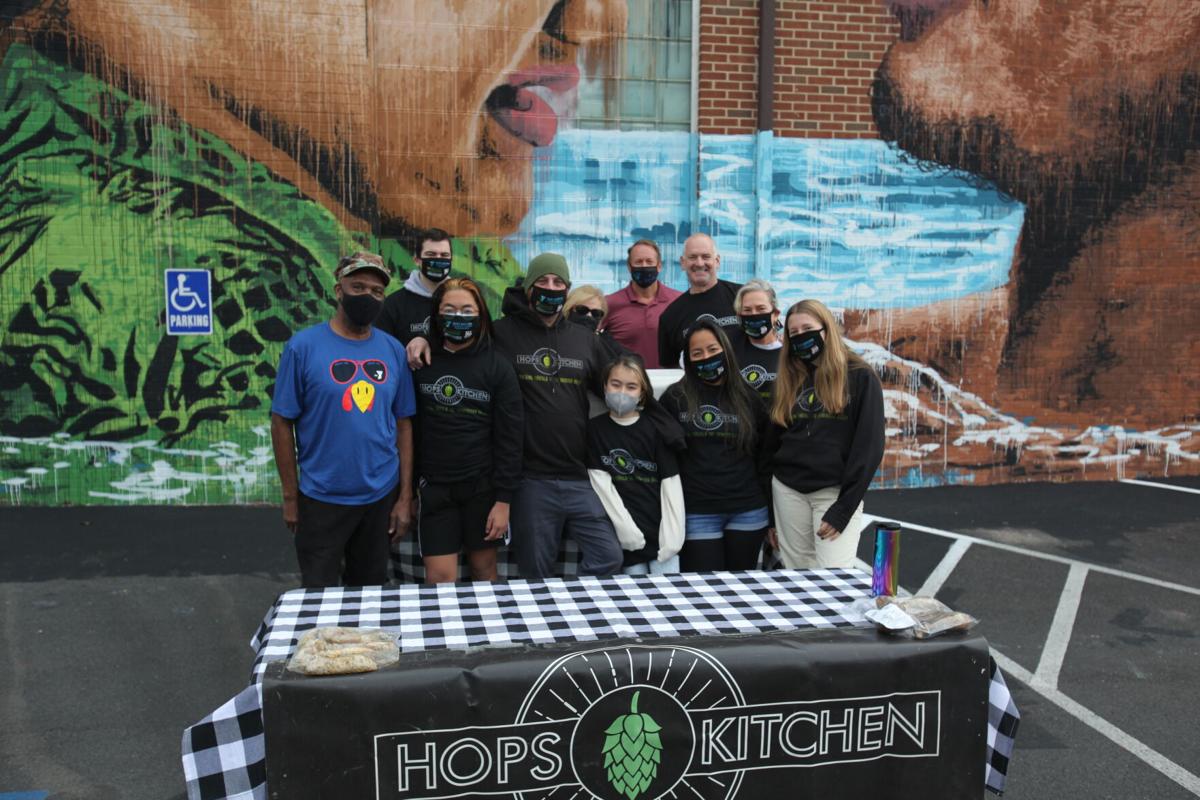 Hops Kitchen handed out 600 pounds of turkey to those in need at the Waynesboro Family YMCA on Wednesday afternoon. 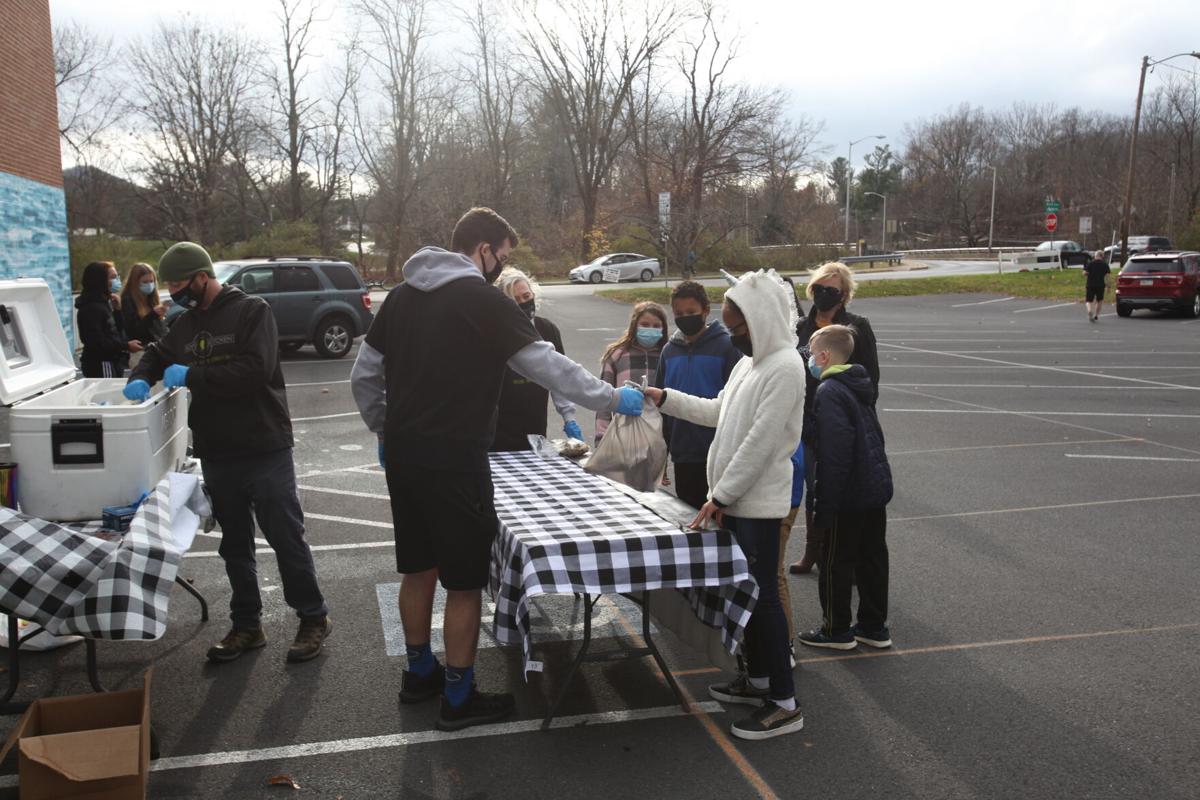 Hops Kitchen handing out bags of turkey to kids who are a part of the YMCA childcare program on Wednesday afternoon. 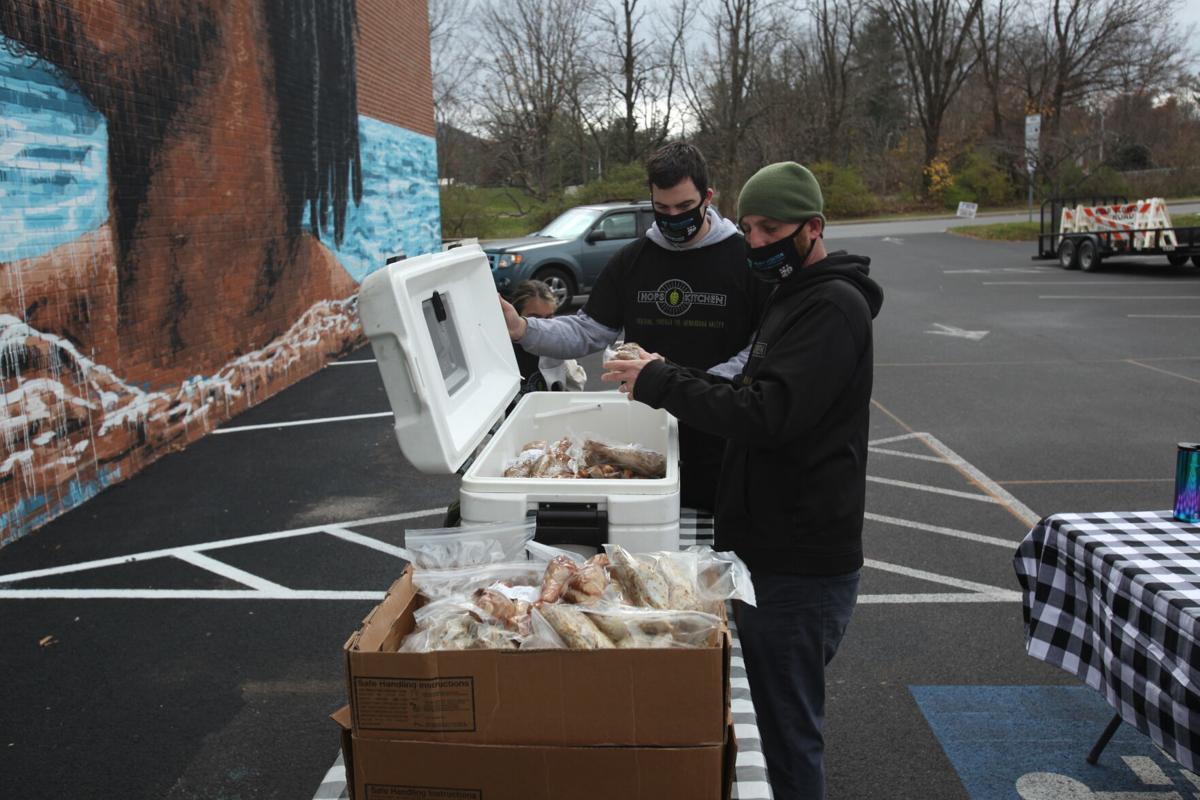 Hops Kitchen owner Mike Pustai (right) wanted to instill a passion for giving in his children by coming out on Wednesday afternoon to do good for the community.

Amid the most unusual Thanksgiving in recent memory, Hops Kitchen and the Waynesboro YMCA partnered together to hand out turkey to those who need it for the holiday on Wednesday afternoon.

Hops Kitchen is a Crozet-based restaurant located in the Pro Re Nata Brewery. Owner Mike Pustai called up Waynesboro YMCA Executive Director Jeff Fife on Monday night to ask about the possibility of doing something for the community. The restaurant purchased 600 pounds of turkey from the local farm KellyBronze Turkeys available to hand out to those in need.

“I’ve worked with them [KellyBronze Turkeys] before, I’ve talked to them and I’ve been out to their farm,” Pustai said. “I was able to buy the product this year, and I decided it would be best to donate it instead of trying to utilize it in some other way.”

Hop’s Kitchen handed out smoked turkey wings and marinated wings to families in the YMCA childcare program, Reprieve Inc. who help the homeless and anybody in need who came out to the YMCA parking lot.

For Pustai, the desire to give is a part of his family history. His father instilled the passion for giving back to the community into him at a young age. Now Pustai and his wife hope to pass that passion along to their children, as one of their daughters celebrated her birthday on Wednesday while helping hand out the turkey.

“Growing up, my dad was like ‘we’re giving back.’ Every Christmas morning, we went and helped out at homeless shelters and the church,” Pustai said. “Now that I have a family, I want to instill that in my children. It is important for the community to together during these tough times and at all times. It’s amazing that we can be doing this during this time.”

As soon as Pustai expressed interest in doing the event, Fife went to work spreading the news to reach as many people as possible with the opportunity. The YMCA called families and spread the word on Facebook.

“We love seeing the resiliency of this community and how it rallies to help people,” Fife said. “It’s humbling. Part of our mission is social responsibility, so being able to connect people like Mike who has the opportunity to help with the people who need that help is a big part of who we are.”

During Monday's public comment period, three Waynesboro residents called on Waynesboro City Council to remove a member of the Cultural Commission over a social media post.

Hypes became a fan of Mad Skillz after hearing his first yearly "Rap Up" in 2002.

After exploring the state with his dog Sjokolade last year, Matthew Johnson was inspired to start a new company.

The service will connect Staunton, Fishersville and Waynesboro to Charlottesville and Albemarle County.

Waynesboro students return to hybrid instruction despite opposition by some teachers

As students return to the classroom for in-person learning, one Waynesboro teacher urges the board to consider all-virtual instruction until teachers have the chance to get their COVID-19 vaccines.

More "Waynesboro at Work" episodes will air the last week of each month.

Hops Kitchen handed out 600 pounds of turkey to those in need at the Waynesboro Family YMCA on Wednesday afternoon.

Hops Kitchen handing out bags of turkey to kids who are a part of the YMCA childcare program on Wednesday afternoon.

Hops Kitchen owner Mike Pustai (right) wanted to instill a passion for giving in his children by coming out on Wednesday afternoon to do good for the community.