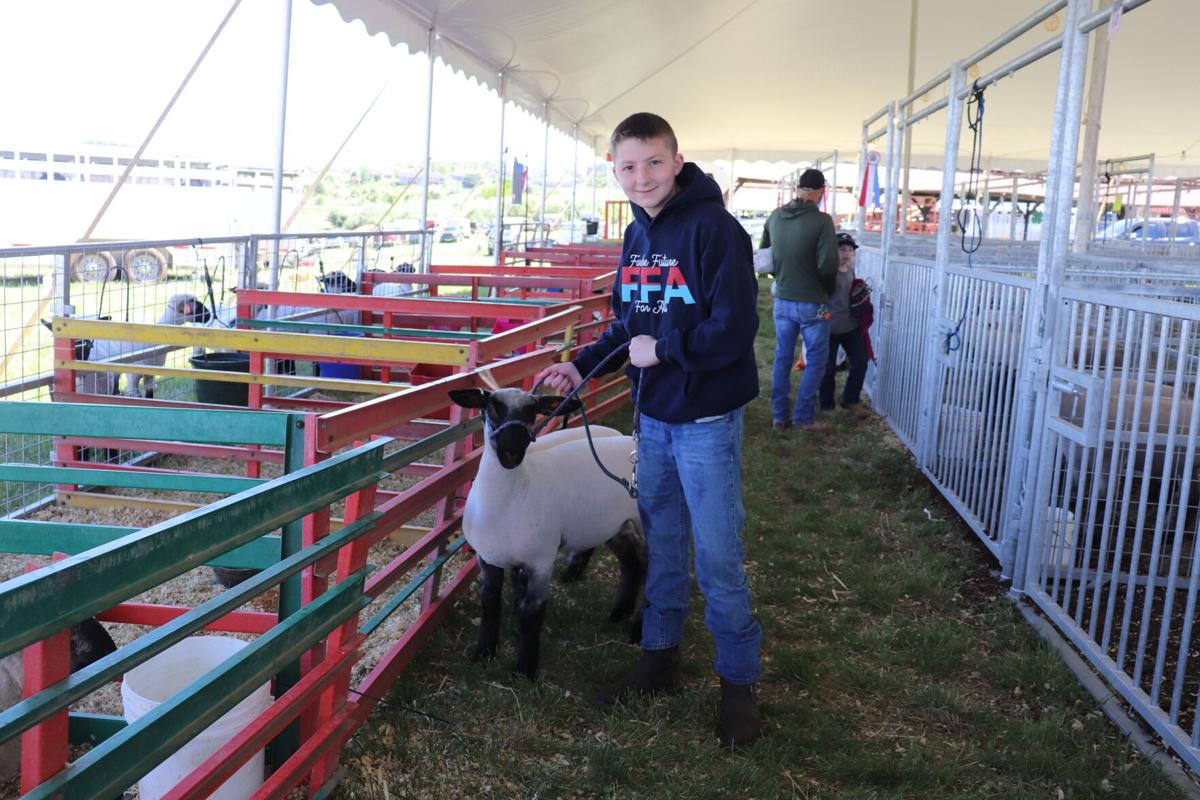 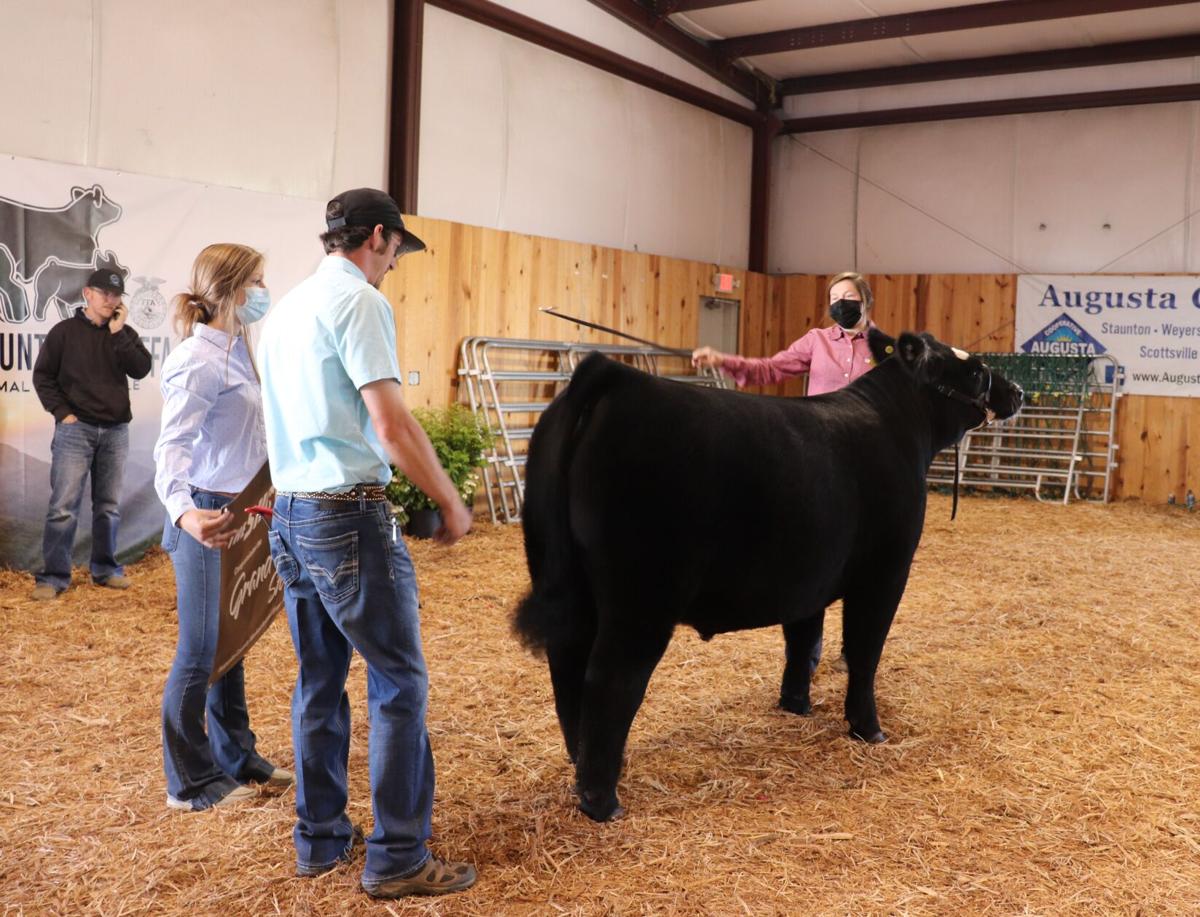 Makayla Talley, who won this year’s Supreme Grand Champion in the 4-H and FFA Market Animal Show market steer sale, leads her steer to the auction ring recently at Augusta Expo in Fishersville.

In its 75th year, the event allows children ages 9 to 18 to have the chance to show and sell animals they’ve raised. This year’s four-day show at Augusta Expo had just over 100 exhibitors and 297 animals — 60 steers, 80 hogs and 157 lambs.

Ahead of Saturday’s market sale, students had their final weigh-in and grading Wednesday, followed by the lamb showing Thursday and the hog and steer showings Friday.

Last year, students recorded videos of themselves showing their choice of livestock. They then sent them to the judges during the virtual event.

Montana Breeden, a junior at Fort Defiance High School, has been showing livestock since she was in 4th grade. She was happy to have once again the chance to show in person this year.

“This year, just the matter of families being here and people being there to watch you makes you feel proud that we’re getting back to normal again,” Breeden said. “We can have people, and we can have all these buyers to come watch us as well.”

Breeden grew up having goats and pigs, but she got into showing livestock after she learned about it from some of her friends. She’s learned a lot over the years, she said.

Emmalee Edwards, the associate extension agent of 4-H Youth Development, said the show is a great program that teaches students several habits, like responsibility and record-keeping, for example.

Edwards said it was stressful to plan this year’s in-person event because of ever-changing COVID-19 restrictions. Still, she was excited to be back in person this week.

“The importance of this program to kids is teaching them life skills and all of those really great skills that you can’t get in a virtual setting,” Edwards said. “It’s very hands-on.”

There were fewer exhibitors this year compared to previous years. While they didn’t have a definite reason, Edwards thinks it was from uncertainty surrounding COVID-19 guidelines.

Edwards said they were disappointed spectators weren’t allowed during the show this year. However, she was impressed with how everyone has cooperated with COVID-19 restrictions since the event started Wednesday.

“I think that everybody was just so happy to be here and be able to do it that they were just willing to do whatever it took to do that,” Edwards said.

Because spectators weren’t allowed in person, all of the shows were streamed by Show Barn Flix.

Joshua Robertson, a 7th grader at Beverley Manor Middle School, had the chance to show in person for the first time this year. He competed virtually last year because of the pandemic. He was glad not to have any spectators this year, he said.

“It made me a bit nervous because I was used to just being recorded like last year, but it felt great to be in the ring,” Robertson said.

Robertson showed two lambs this year, named Luigi and Patches. He’s learned a lot by raising them over the past two months, he said.

“I’ve learned to keep them full of food, full of water, shear them, and taught them how to walk and brace, so whenever I’m in the ring, they will stand good,” Robertson said.

Whenever Robertson was nervous about showing, he would read to the lambs to calm them both himself and them down. Leah Robertson, Joshua’s mother, said that was his go-to whenever he was nervous.

Leah added that watching Joshua raise the two lambs has made her proud.

“It’s a lot of commitment, and he stepped up,” she said.

Riverheads High senior Hunter Ross has been showing livestock since she was in 7th grade. This year, she showed lambs and hogs and talked about the differences between raising the two.

“Hogs are easy-going. You just tap them along. The sheep are just doofuses,” Ross said with a smile.

Ross’ favorite part of competing is playing with the pigs, she said. Although she’s a little shy, she thinks showing is awesome.

Ross said she would miss everything about showing after she graduates this year.

“It’s really going to suck not doing it,” Ross said.

The 2021 Augusta MAS Support Sale, which raises donations for exhibitors, will run from Sunday through Wednesday. Purchasing begins 6 a.m. Sunday.

NYC to pay unvaccinated $100 to get jab

NYC to pay unvaccinated $100 to get jab

NY to require state employees to get vaccines

NY to require state employees to get vaccines

Virginia Freedom Fest to be held at Plaza Antigua

The first annual Virginia Freedom Fest will be held at the El Corral outdoor venue at Plaza Antigua in Waynesboro on Saturday, July 31.

Schools will follow the Virginia Department of Health’s recommendation, which states everyone will wear a mask in elementary schools because there is no vaccination available for children under the age of 12.

The fair begins Tuesday and runs through July 31 at the Augusta Expo Event Center.

For folk musicians Robin and Linda Williams, the title track on their newest recording, set to be released Friday, has meaning on so many levels.

With less than three weeks remaining before the school year begins, Waynesboro officials are unsure whether there will be a mask mandate.

All in the family: Waynesboro Sheriff Joe Harris Jr. to retire after more than two decades

For just shy of 50 years, Waynesboro residents have only had to remember one name as their sheriff — Joe Harris.

Body found in a field in Stuarts Draft

Augusta County deputies found a body Saturday morning in Stuarts Draft which is probably that of a man recently reported missing.

On July 16, Shenandoah National Park took to social media to alert its attendees to be vigilant about an increased number in hornet and yellow jacket nests in the south district of the park near Waynesboro.

Makayla Talley, who won this year’s Supreme Grand Champion in the 4-H and FFA Market Animal Show market steer sale, leads her steer to the auction ring recently at Augusta Expo in Fishersville.