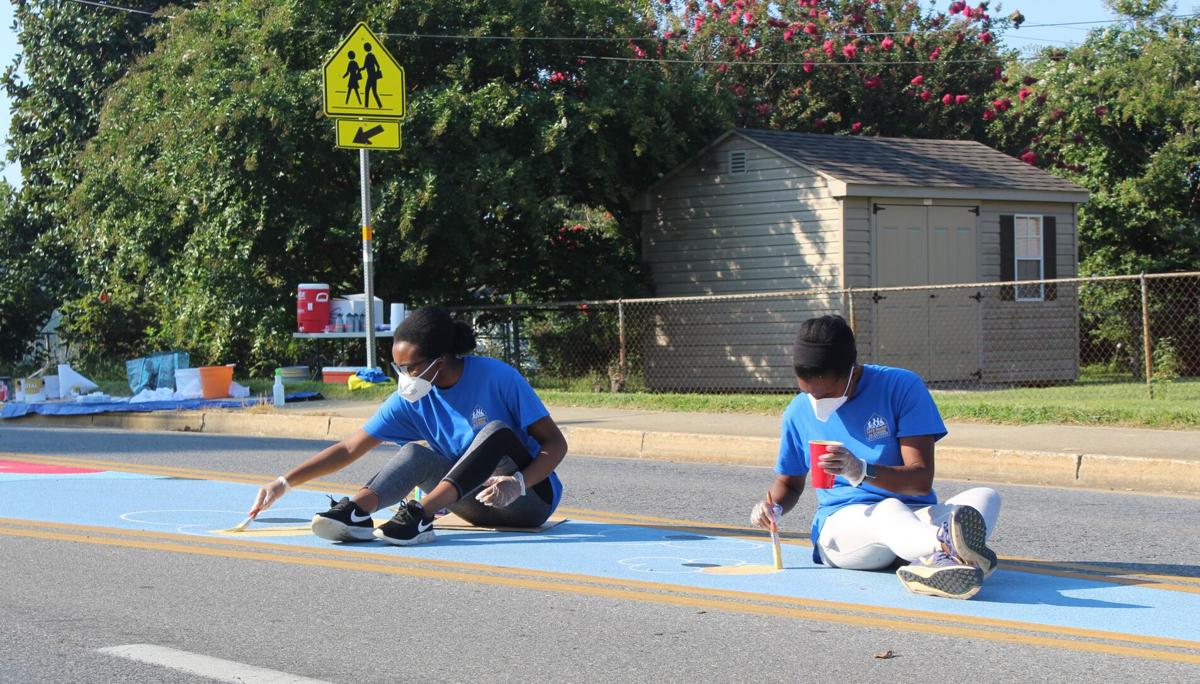 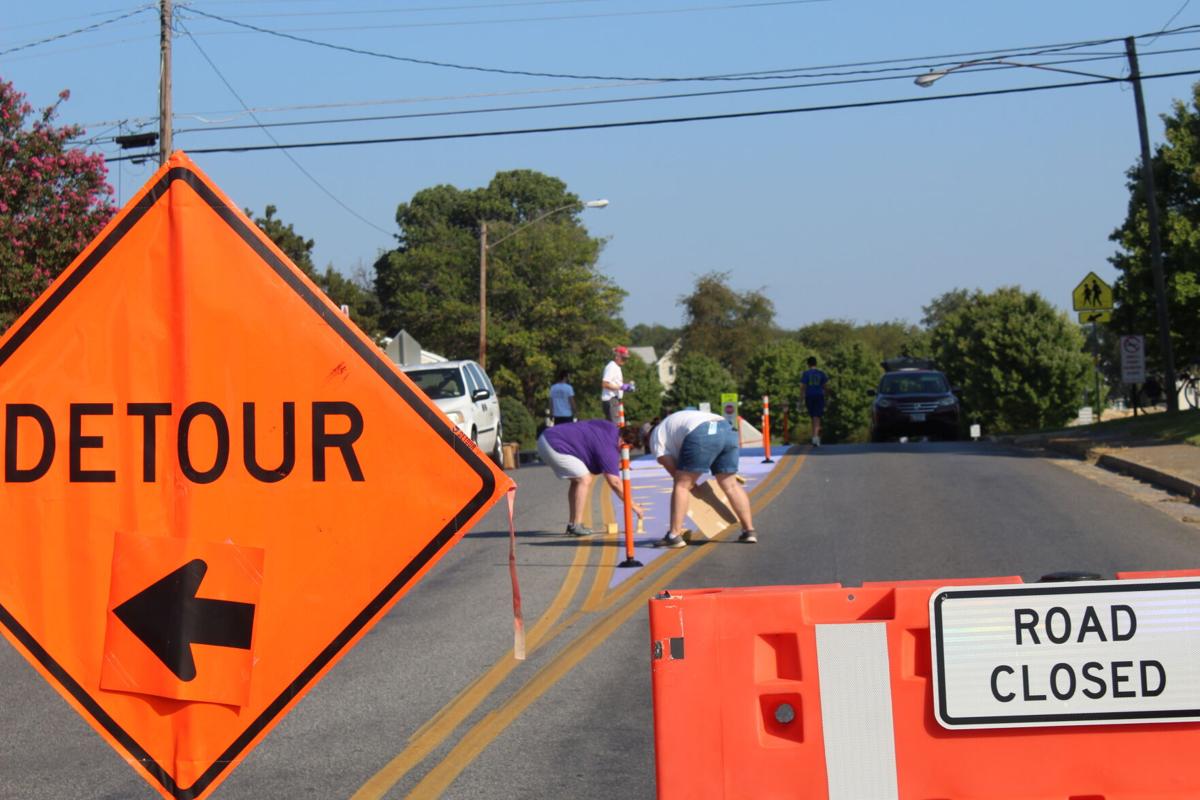 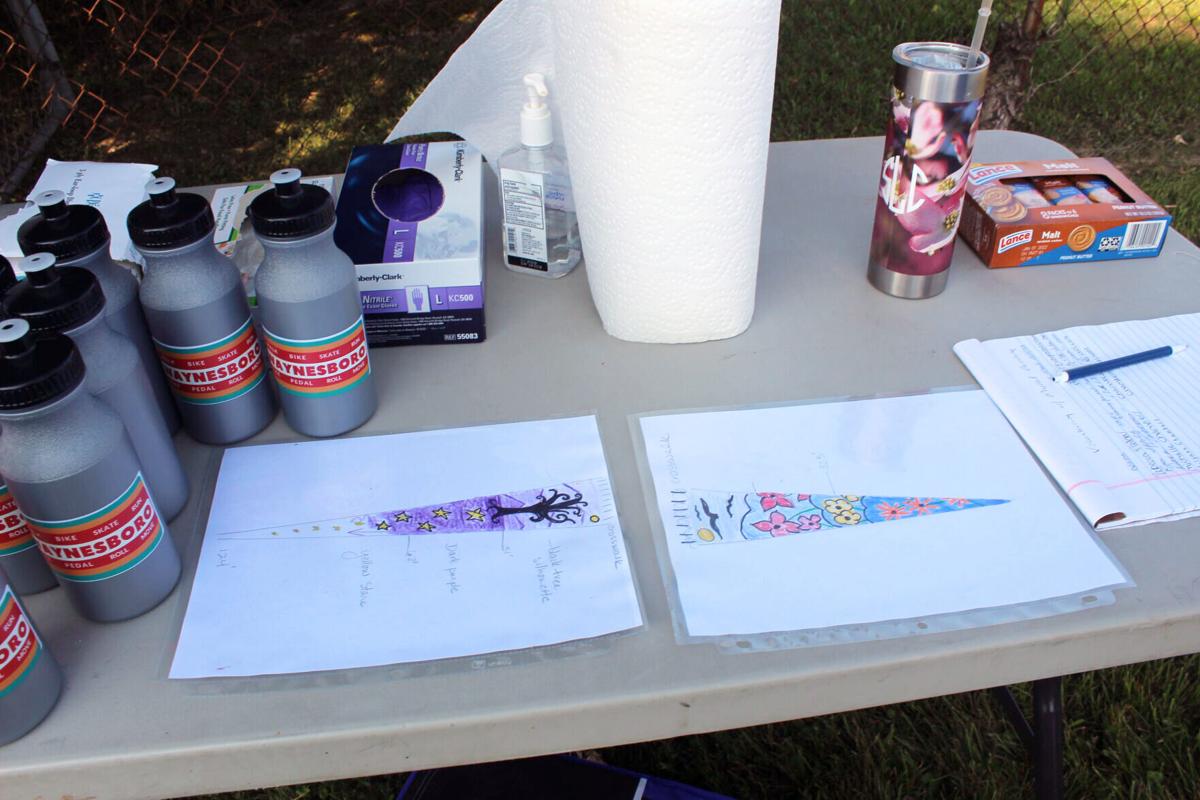 Two sheets of paper display the design of the crosswalk mural in front of Kate Collins Middle School on Saturday during a tactical urbanism project. The concept was sketched by the school’s art teacher, Sharon Morris.

Walking to school just got a little more colorful.

Students, educators and community volunteers painted a temporary mural Friday and Saturday on a pedestrian island where students cross in front of Kate Collins Middle School on Ivy Street.

“The idea is to make the crosswalk more visible as you’re coming upon it and to have motorists slow down and look at the beautiful crosswalk instead of speeding by the school,” said Susan Lenderman, a coordinator for Waynesboro Safe Routes to School.

The project, a follow-up to the mural that was painted beside Waynesboro High School last fall, aims to create safer, more walkable routes for students to and from their school, Lenderman said.

It includes the school’s purple and gold colors, a cluster of stars, birds, clouds and trees.

“We just wanted something cheerful,” Morris said. “To try to kind of cheer up the atmosphere around the school.”

Ivy Street does not have a lot of traffic, so the temporary mural might last a while, she said.

Fishersville resident Michelle Chambers, who heard about the project on Facebook, volunteered with her daughter, Lilyann.

“We decided it would be a great opportunity to volunteer and do something nice for the city,” said Michelle Chambers. “I am not a painter, but I should be. This is very relaxing.”

Lillyann Chambers, who is taking a drawing class at Blue Ridge Community College in Weyers Cave, agreed with her mother.

“I’m kind of thinking about pursuing art as a career in the future,” said Chambers, who was homeschooled before attending BRCC.

In her planning with Morris, Nester said the mural’s theme was chosen to represent the experiences of a middle school student, “and the growth and the changes that they have from sixth, seventh and eighth grade,” Nester said.

The mural was funded with a grant from the Virginia Department of Transportation’s Safe Routes to School program.

Some of the grant money was spent on paint, as well as T-shirts for participants.

Get our local education coverage delivered directly to your inbox.

Three weeks after opening their schools in-person for the first time in over a year, Waynesboro public schools executive director of student services Dr. Ryan Barber provided an update on what the first few weeks have been for the administration, staff and students.

Lassiter: As a child, my father was unable to attend Waynesboro High during segregation. Now he's an interim administrator there.

Ordinarily, seeing my dad in the stands of a Waynesboro High School sporting event wouldn’t be picture-worthy.

Earlier this week, Sentara’s RMH Foundation gifted $100,000 to Blue Ridge Community College for use in healthcare education at the school.

Two sheets of paper display the design of the crosswalk mural in front of Kate Collins Middle School on Saturday during a tactical urbanism project. The concept was sketched by the school’s art teacher, Sharon Morris.