Residents of Waynesboro and Augusta County will join voters across the U.S. in casting their votes in Tuesday’s General Election.

As of Thursday, more than 2.3 million early votes had already been cast in Virginia since early voting started on Sept. 18, according to data from the Virginia Public Access Project.

Where and when to vote

COVID-19 caused a temporary change in all polling locations to one centralized location at Kate Collins Middle School for all Waynesboro voters in May and June. On Tuesday, however, the city will be utilizing all four of its regular polling locations.

Ward A will vote at Basic United Methodist Church, Ward B at the Waynesboro Public Library, Ward C at Wayne Hills and Ward D at Westminster Presbyterian Church.

In Augusta County, White Hill precinct voters also had a temporary change in precinct location to Riverheads High School in June. On Tuesday, all Augusta County precincts will vote at their regular locations.

Voters unsure of their polling precinct can visit elections.virginia.gov or call their local registrar’s office.

Voters are encouraged to wear masks on Election Day and adhere to social distancing guidelines.

All polling locations will be open Tuesday from 6 a.m. to 7 p.m. Any voter in line by 7 p.m. is eligible to vote.

Early weather forecasts for Election Day is sunny with temperatures predicted in the mid 50s with no chance of precipitation.

Those who requested absentee ballots have until Tuesday to postmark their mail-in ballot. Ballots also can be returned to official dropboxes — located at 250 South Wayne Avenue for Waynesboro voters and at the Augusta County Government Center in Verona for county voters.

Voters can track their ballot online at ballotscout.org.

Voters no longer wishing to vote absentee should bring their mail-issued ballot with them to their polling location on Election Day.

Who’s on the ballot

Ballots will look the same for both Waynesboro and Augusta County residents.

Voters will chose the president and vice president, members of the U.S. Senate and House of Representatives. 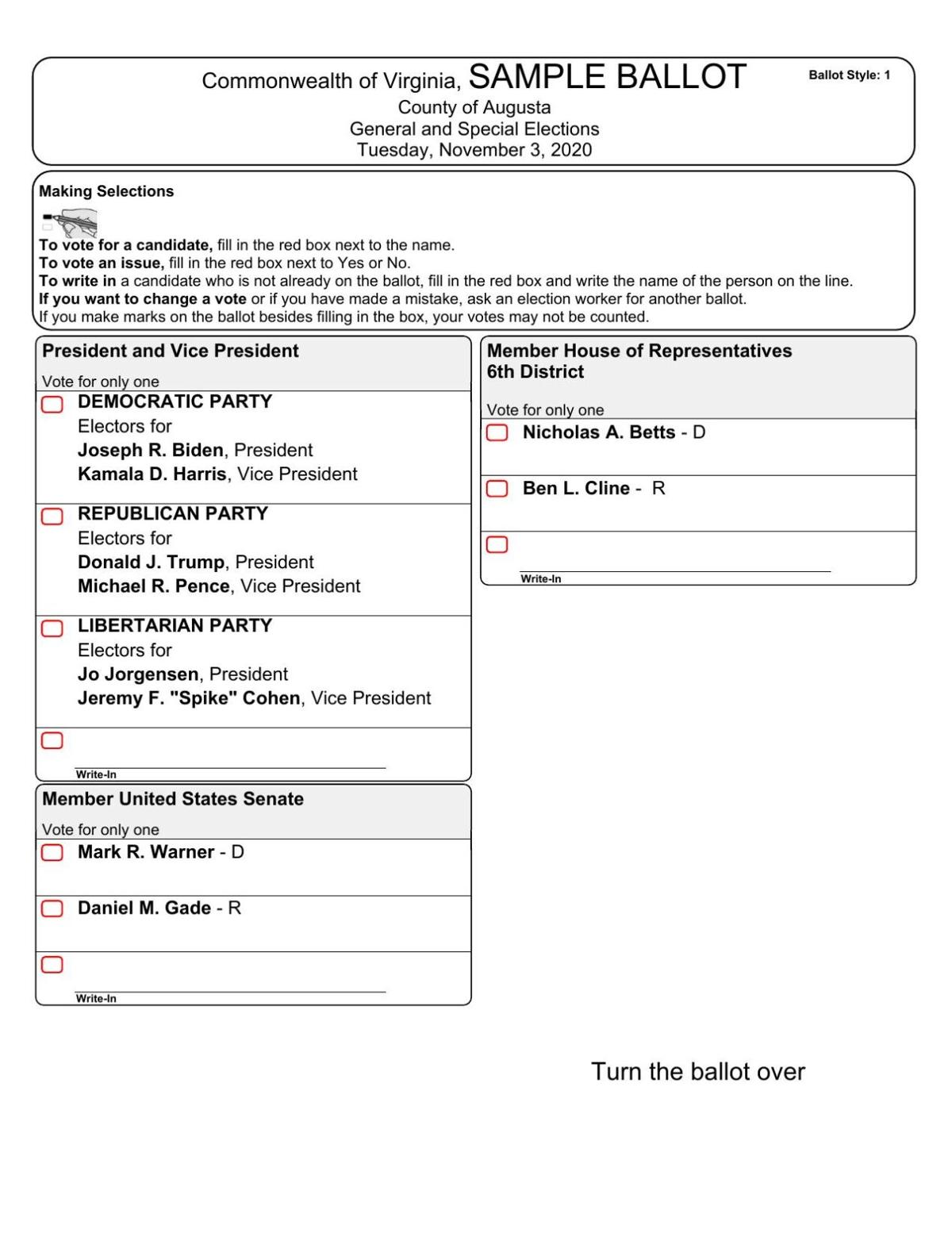 Warner is a two-term Democrat first elected in 2008. Both of Virginia’s U.S. Senate seats have been held by Democrats since 2008. John Warner, no relation to Mark Warner, was the last Republican to represent Virginia in the U.S. Senate.

Gade is a first-time candidate. He is an Iraq War veteran who lost a leg in combat and is now a professor at American University.

In the 2014 U.S. Senate race against Warner and Republican Ed Gillespie, Warner narrowly won with 49.1% of votes to Gillespie’s 48.3%.

Lastly, voters will select their choice for House of Representatives in the 6th district.

The 6th district covers most the Shenandoah Valley including the counties of Amherst, Augusta, Bath, Botetourt, Highland, Page, Rockbridge, Rockingham, Shenandoah and Warren, as well as the cities of Buena Vista, Harrisonburg, Lexington, Lynchburg, Roanoke, Staunton, Waynesboro, and portions of Bedford and Roanoke counties.

Cline is being challenged by Democrat Nicholas Betts, a 30-year-old law clerk. Betts previously ran for the Democratic nomination two years ago to fill the Rockbridge-area House of Delegates seat, but was unsuccessful.

On the back side of the ballot for all Virginia voters are two proposed constitutional amendments.

The second deals with a tax exemption for disabled veterans and asks, “Should an automobile or pickup truck that is owned and used primarily by or for a veteran of the United States armed forces or the Virginia National Guard who has a one hundred percent service-connected, permanent, and total disability be free from state and local taxation?”

The options for both questions are yes or no.

When will you know the winners? What to expect on election night.

Warner says he takes nothing for granted; challenger Gade confident he can win

Public opinion polls suggest a comfortable advantage for Sen. Mark Warner, D-Va., in his bid for re-election this fall, but after a close call in 2014 that saw the incumbent barely eke out a victory, his GOP challenger this time, Daniel Gade, is confident he can prevail.

It has received much less attention than redistricting, but Virginia voters are considering a second proposed state constitutional amendment on their ballots this year.

Efforts on redistricting referendum near the finish line

Down the electoral ballot, Virginians are weighing a question about power over the political maps that will govern the state for the next decade. 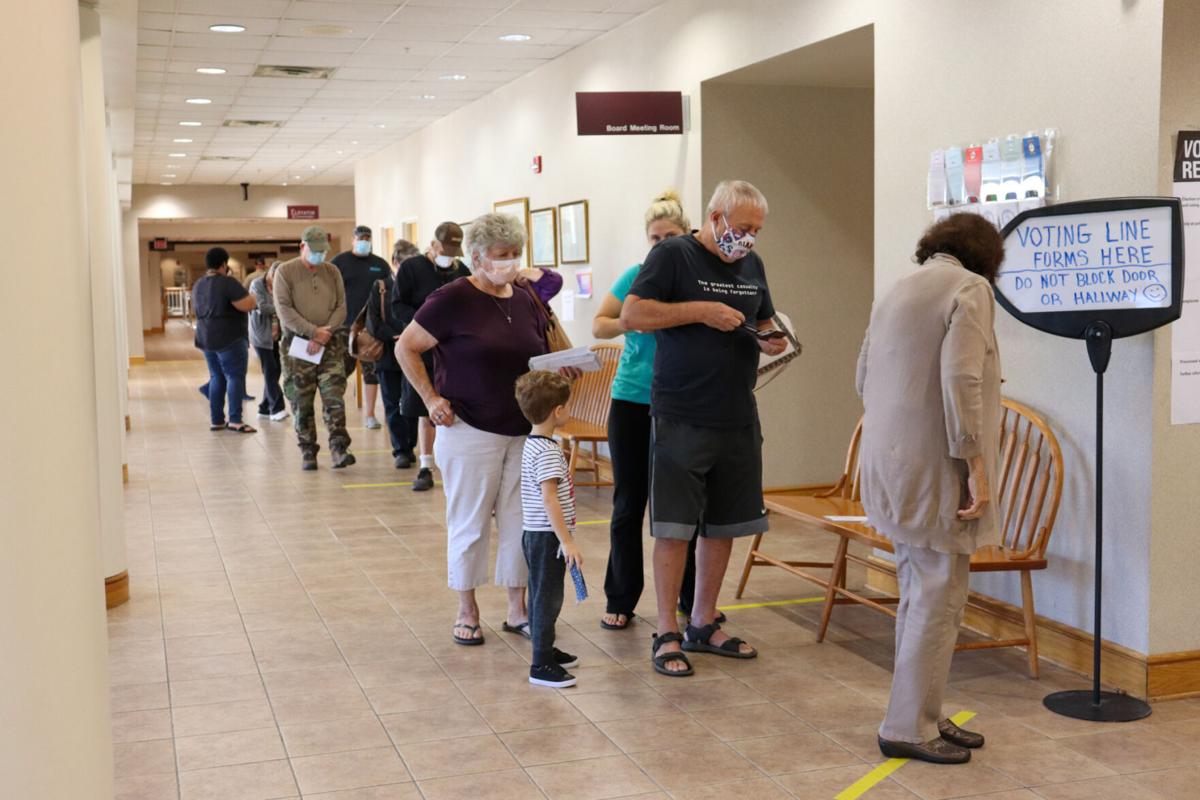 Augusta County residents line up outside of the South Board Room at the Augusta County Government Center in Verona to cast their vote during early in-person voting on Tuesday, Oct. 6, 2020. 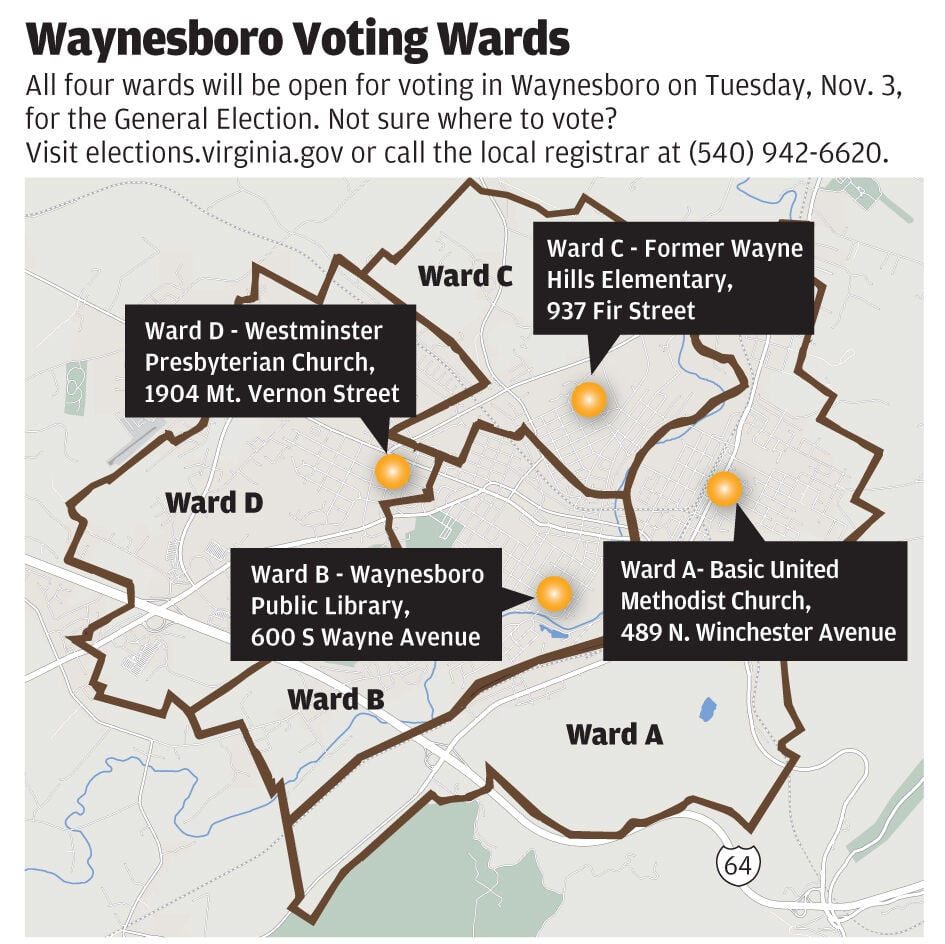