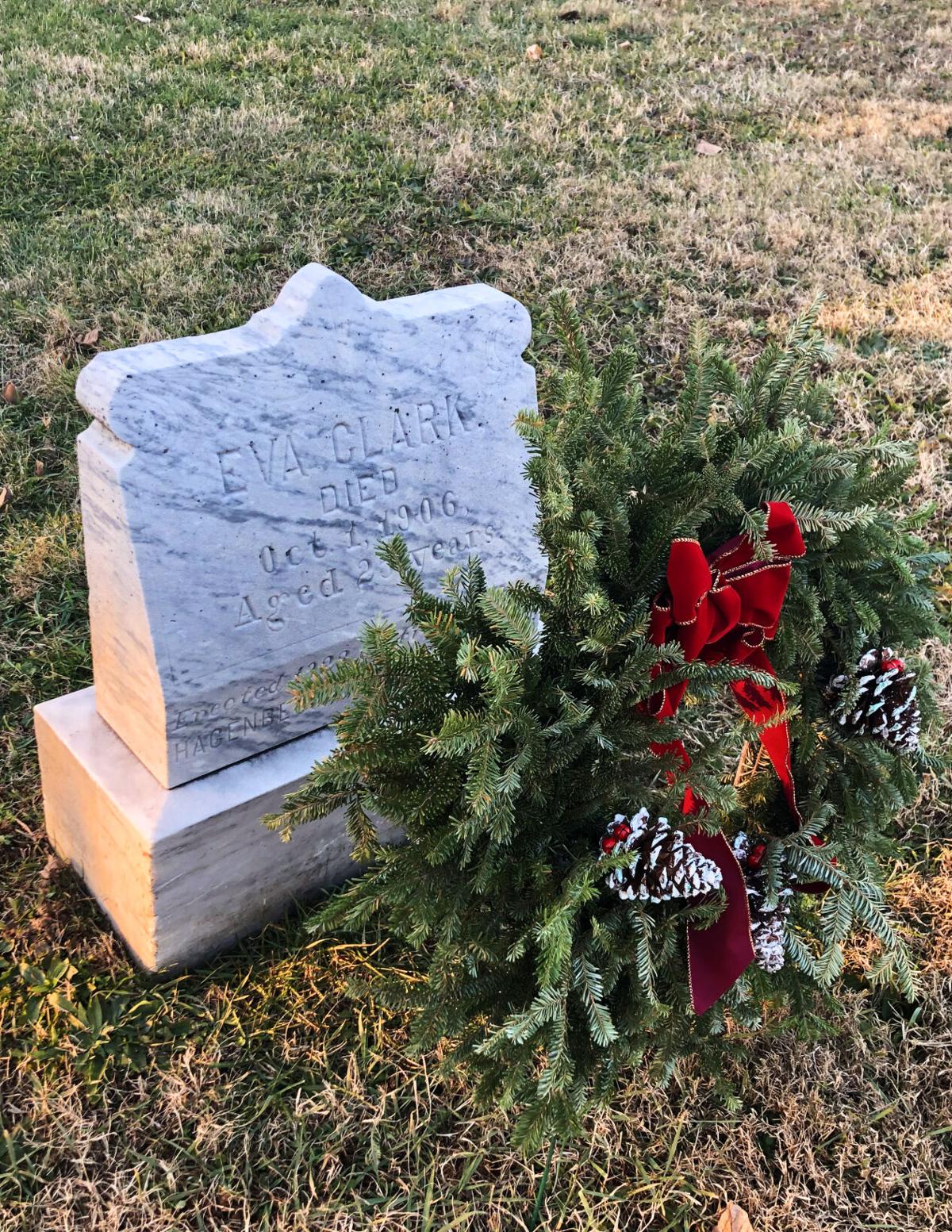 STAUNTON — Having grown up in Staunton, Aíne Murphy Norris is no stranger to hearing the story of Eva Clark, a young aerialist who was shot and then later died in the historic city in 1906.

Norris’ recent article titled “Lore No More: Uncovering Eva Clark’s Rightful Legacy,” published in the Bandwagon: The Journal of Circus History, seeks to uncover the life and career of Clark and tell more about her life as a fearless entertainer.

“I was always wondering why we only knew about her death,” Norris said. “Why didn’t we put any time into finding out more about her life? That’s kind of what got me started digging.”

The headlining aerialist was performing with Cole Bros. World-Famed Triple Railroad United Shows when she was shot in Staunton. According to the Staunton Daily Leader, On Sept. 6, 1906, Eva was in her dressing room around 10 p.m. when she got into an altercation with a laborer named “James Richards.” Eva’s husband Lum was said to appear and Eva “stepped between the two men, one of whom was flourishing a pistol.” The .38 caliber weapon was discharged. Eva suffered “a severe wound in the abdomen” but told authorities it was an accident.

Clark lived less than a month after the shooting. On Oct. 1, 1906, she died when the wound became infected after a second surgery. Up until her death, she maintained that the shooting was an accident. Her exact age was unknown, but she was determined to be between the ages of 23 to 25.

Clark’s funeral was in Staunton, and she was buried in an unmarked grave in Thornrose Cemetery. Her grave remained unmarked until 1923 when the Hagenbeck-Wallace Circus erected a gravestone in her honor.

Around 2003, Norris, who now lives in Pensacola, Florida, worked downtown at Zelma’s. She became interested in Clark’s life after hearing her story during ghost walks and the Staunton Victorian Festival.

Norris started her research then, but really picked it up after she met Dawn Rochelle Tucker. Tucker is a Flagstaff, Arizona native who received a Master’s Degree in Shakespeare in Performance from the American Shakespeare Center in partnership with Mary Baldwin University.

The two women had never met in person before. Norris called meeting Tucker, “good fortune.” She noticed they were both clipping the same Clark stories on newspapers.com and emailed Tucker.

Tucker said her introduction to Clark was a little more ghostly. She learned about Clark just two days before she was set to leave Staunton after finishing school. She would run through Thornrose Cemetery, but always past the back of Clark’s grave.

“On that last run, I just heard a voice say ‘turn around’ as soon as I got past Eva’s grave,” Tucker said. “I turned around, and I was just fascinated by what the headstone said because it has that line that says where it’s erected by her friends at the Hagenbeck-Wallace Circus.”

“I just kept thinking, ‘this doesn’t feel right,’’’ Tucker said. “In all the articles since, everyone maintained ‘accident, accident, accident,’ and that’s not accurate. For a long time, I thought I was crazy.”

During their research, the two discovered that Clark’s husband Lum had a history of committing violent acts and had tried to kill Clark once before. Norris also published new information on Lum, proving he returned to the United States after exiling himself to Mexico. According to Norris, news coverage perpetuated the idea that Clark was never to be seen again as recently as 2014.

Norris and Tucker were frustrated with several of the inaccuracies found in the more than two dozen newspaper articles that covered the Clark shooting. In Staunton, the Staunton Daily Leader and the Staunton Spectator and Vindicator both reported on Clark, according to “Lore No More.” Nothing is mentioned about her life or time as a performer.

“Some of the newspapers got her name wrong,” Tucker said. “They didn’t even bother to figure out her name.”

Norris said there was no in-depth reporting and questioned why Clark’s brother-in-law A.T. “Allie Clark” came to Staunton after the shooting and became the primary source for reporters.

“We couldn’t figure out if that’s because somebody was speaking for her, because she was a circus woman or all of the above,” Norris said.

In 2019, Norris and Tucker visited the Robert L. Parkinson Library and Research Center at Circus World in Baraboo, Wisconsin. While there, they discovered tiny notebooks filled with old circus routes, which Staunton was always listed in. Norris had heard all of her life that Staunton was an old circus town, but this confirmed it.

Elizabeth Brannigan, a Cincinnati resident whom Clark was said to be close with, traveled to Staunton to retrieve her body to have it buried in Clark’s hometown. It was never released to her.

“I think that there should be a stone or a monument in Cincinnati next to her people,” Tucker said. “That’s an important American tradition.”

Though Norris and Tucker discovered many never-before-seen items during their research, they are still looking for Clark’s birth certificate, performer card and the coroner’s report that disappeared from Staunton years ago.

“Circus families are hard to track because they changed their names and moved constantly,” Tucker said. “A lot of times they were born on the circus route, so there’s not a birth certificate in a location that you would expect.”

Norris and Tucker encourage anyone with any information, photographs, articles or oral history to consider sharing it with them at ainemnorris@gmail.com or dawnrochelle@gmail.com.

“I think there’s more to be found,” Norris said. “We all know people in Staunton with those dusty old attics, and I know there’s more out there.”

The Lyndhurst couple has walked about 2.7 miles a day for the last 203 days.

No injuries were reported in the fire, and police said they will not be releasing a motive.

Americana, roots, country, folk and bluegrass bands will put on a show on the inn's lawn every Friday night from Memorial Day to Labor Day.

Last year, Historic Garden Week was canceled only for the second time since 1927 because of the COVID-19 pandemic. This year’s event consisted of gardens and exterior spaces exclusively because of safety protocols.

In addition to the indoor ceremony scheduled for Saturday, May 15, students may now choose to participate in an outdoor ceremony on Friday, May 14, according to a letter posted on the school’s website.

A 20-year-old Waynesboro man is facing several drug charges after a teenager died from a drug overdose.

A ceremony is scheduled for Saturday, May 15, beginning at 9 a.m.

In the hour and a half virtual meeting, council members reviewed the city's current debt, federal funds and explored more in depth the equalized tax rate of 83 cents.

Waynesboro School Board approves calendar for next year

The Waynesboro School Board on Tuesday unanimously approved the academic calendar for the coming school year.

Residents of the Central Shenandoah Health District can now schedule their COVID-19 vaccine appointments online with the health department.