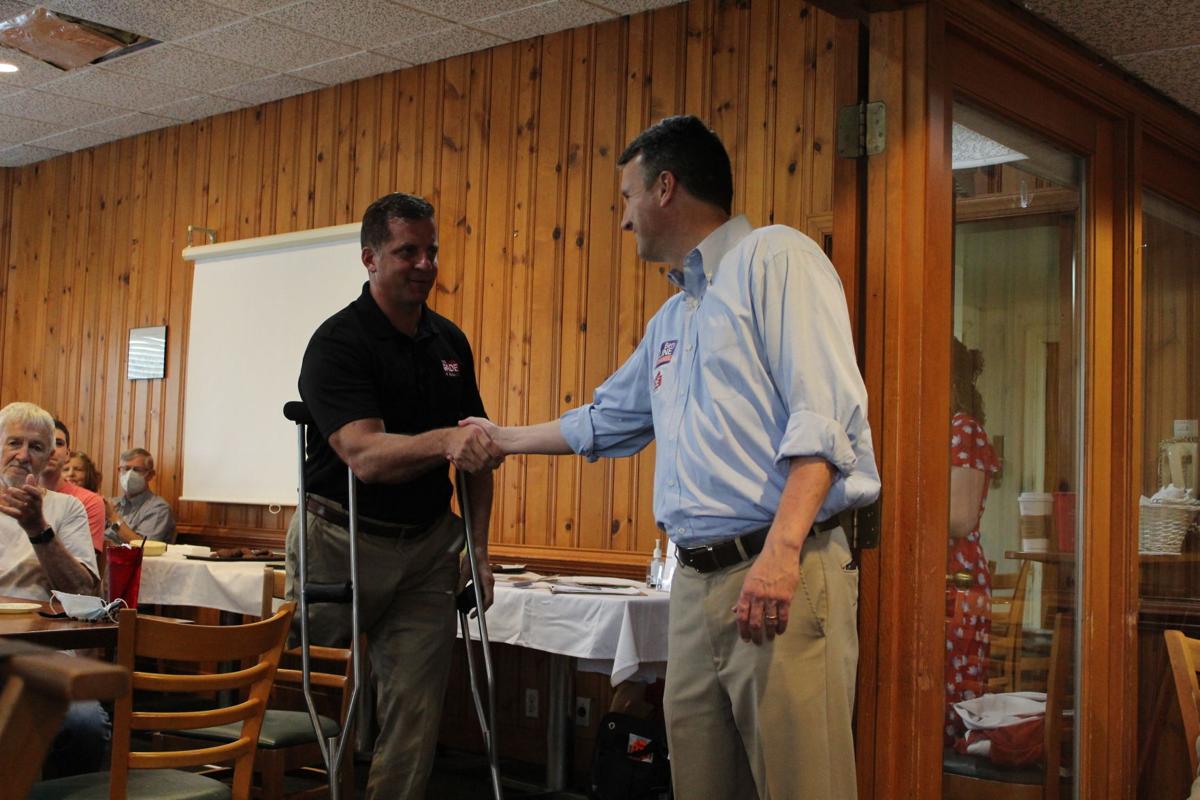 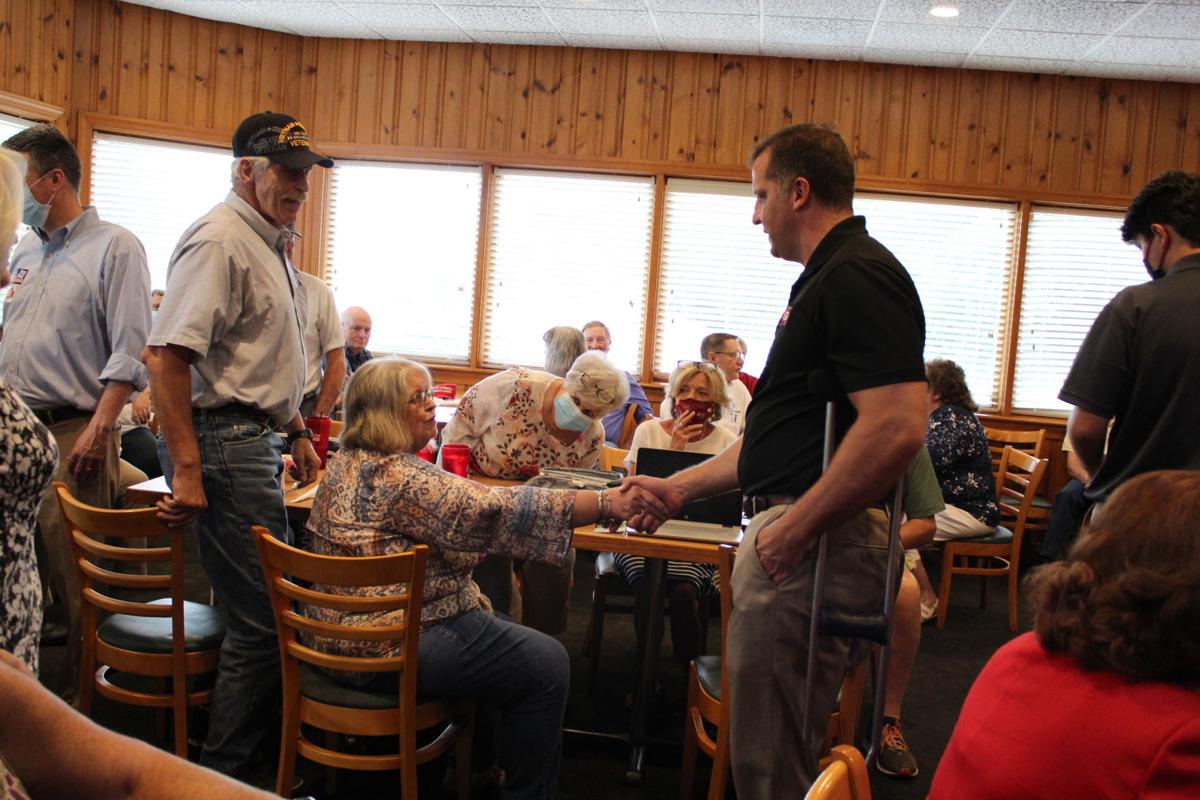 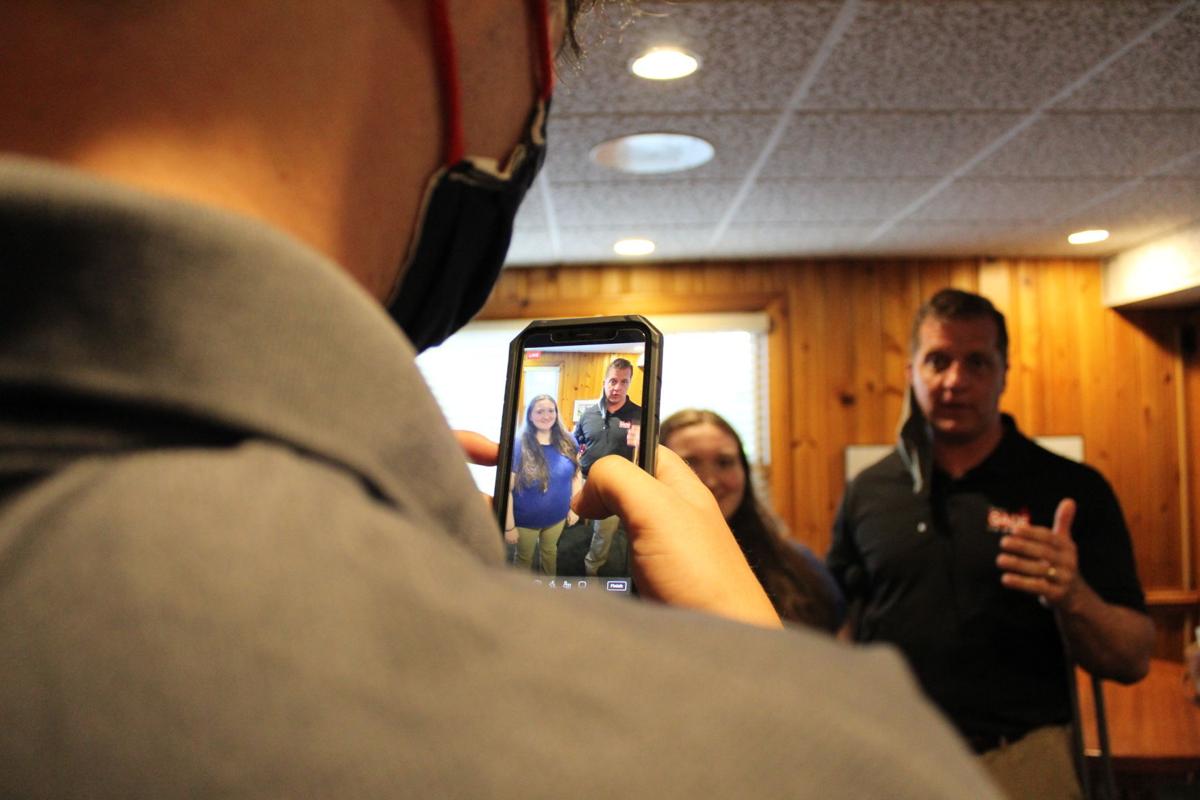 Republican candidate for U.S. Senate, Daniel Gade, takes photos with attendees at a meet and greet event at Mrs. Rowe’s restaurant in Staunton on Tuesday, Aug. 18, 2020. 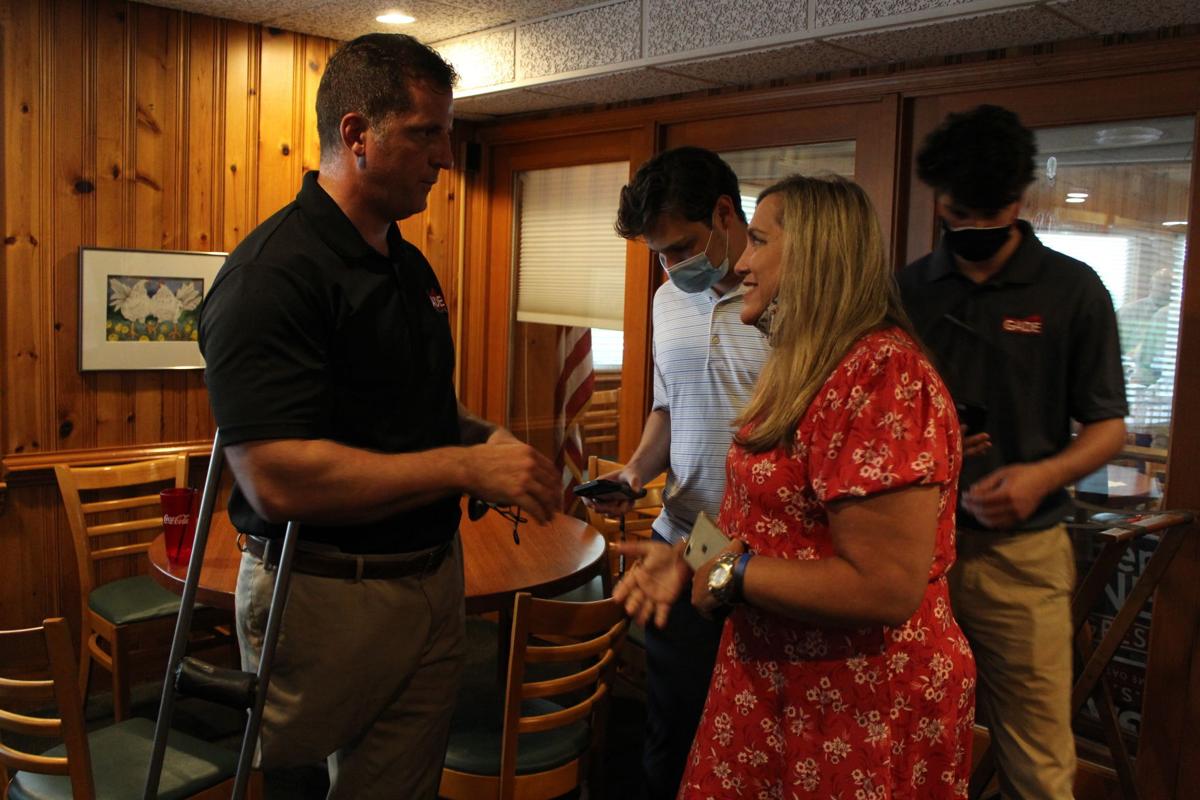 The Staunton visit was Gade’s sixth stop during a two-day Southwest Virginia tour spanning across Norton, Jonesville, Gate City, Abingdon, Staunton and Rockingham. Gade first visited Staunton in January when he was one of three Republicans vying for the nomination. At that event, about a dozen people showed — a stark comparison to Tuesday’s event.

In the Republican primary, the retired US. Army lieutenant colonel and Iraq War combat veteran received more than 70% of overall votes in Staunton, Waynesboro and Augusta County. He will face U.S. Sen. Mark Warner, D-Va., in the November General Election. Warner is a two-term Democrat first elected in 2008. Both of Virginia’s U.S. Senate seats have been held by Democrats since 2008.

“Winning the primary was humbling and thrilling because it means the Republican party is now unified going against Mark Warner,” Gade said. “Now, instead of being the obvious front runner, I’m the obvious underdog. But the good news is that I’ve been in tough fights before, and Mark Warner has a lot to answer for in his record.”

Gade was joined by Congressman Ben Cline, R-Botetourt, who represents the 6th district in the House of Representatives.

“We are going to shock the nation on Nov. 3 when we throw Mark Warner out of the Senate seat. There’s one way we’re going to do that — maximizing turnout in the reddest part of the state here in the Shenandoah Valley,” Cline said. “In the Senate, we’ve got no leadership for the Commonwealth of Virginia. I need a Senator, a partner, that I can work with for the people right here in the Shenandoah Valley.”

Gade told the crowd the November election matters because America is “at a fork in the road right now.”

“The left in America is empowered and they feel hopeful about their future. For years, the left had this mask ... and now the political environment has shifted," Gade said. "The fork in the road has become such that the left has fully embraced their leftists ideas."

In June, before the GOP primary, Warner challenged the eventual Republican nominee to three debates. After Gade claimed the nomination, he challenged Warner to five debates — one in each region of Virginia. However, Gade said Warner has “gone completely dark” on the issue.

“We don’t know whether he’ll accept the debate challenge or not,” Gade said. "It’s going to take a lot of courage for him to stand on the debate stage with me five times and defend his record, and he’s never demonstrated courage before."

If Warner does not agree to the five debates, Gade said he will host five town hall events instead.

In wrapping up his Staunton meet and greet, Gade told attendees that their choice in November is between a politician or servant.

“On the one hand, we’ve got a swamp creature. On the other hand, we’ve got somebody who has demonstrated their lifetime of service and heart,” Gade said. “Now it's time for the people of Virginia to decide who will serve them — a career servant or a career politician.”

Although this is his first campaign, Gade called himself the clear front runner.

More Waynesboro and Augusta County voters headed to the polls for Tuesday’s Republican primary for U.S. Senate than in 2018.

Republican candidate for U.S. Senate, Daniel Gade, takes photos with attendees at a meet and greet event at Mrs. Rowe’s restaurant in Staunton on Tuesday, Aug. 18, 2020.