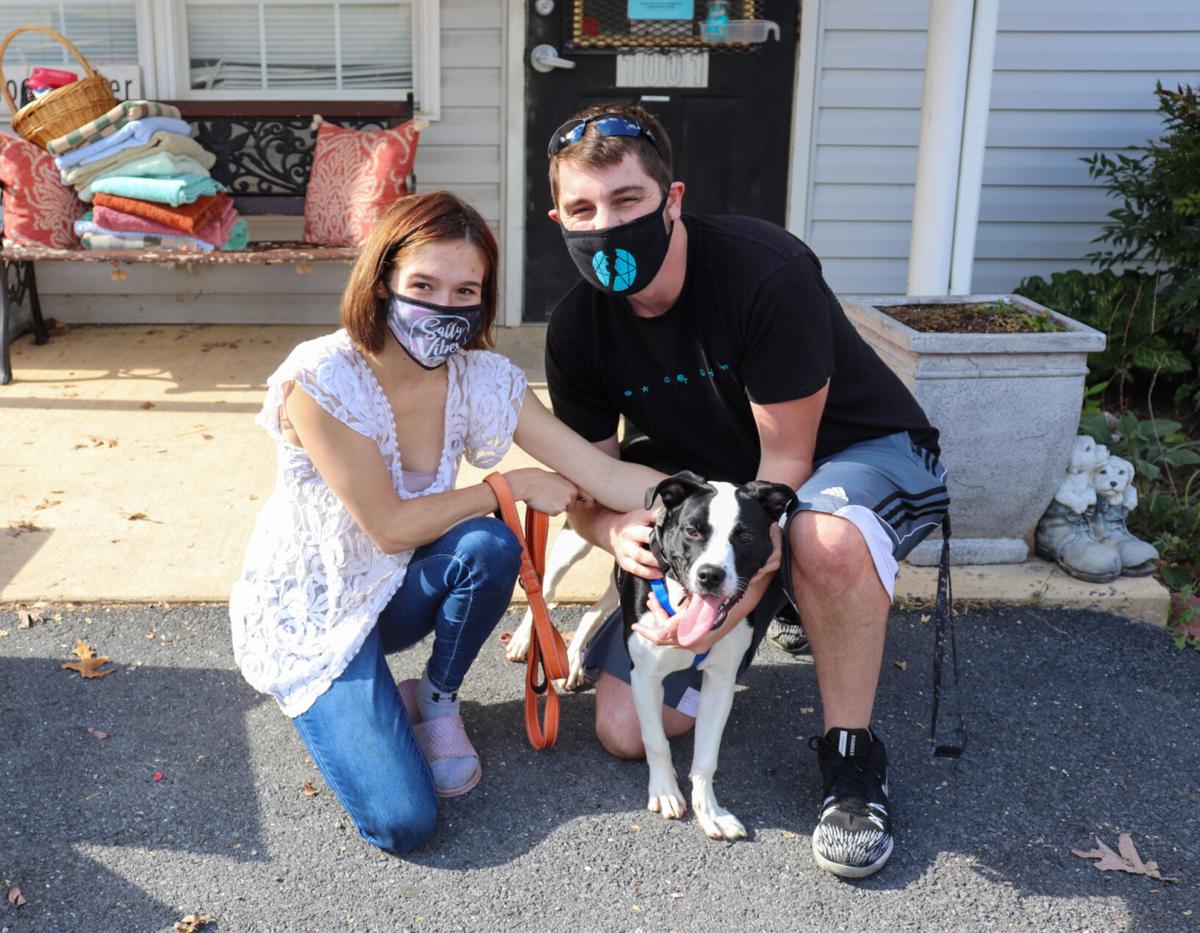 Nick Tsvetanov and Madison Chandler traveled from Reston to adopt Hamlet from the Shenandoah Valley Animal Services Center on Friday. 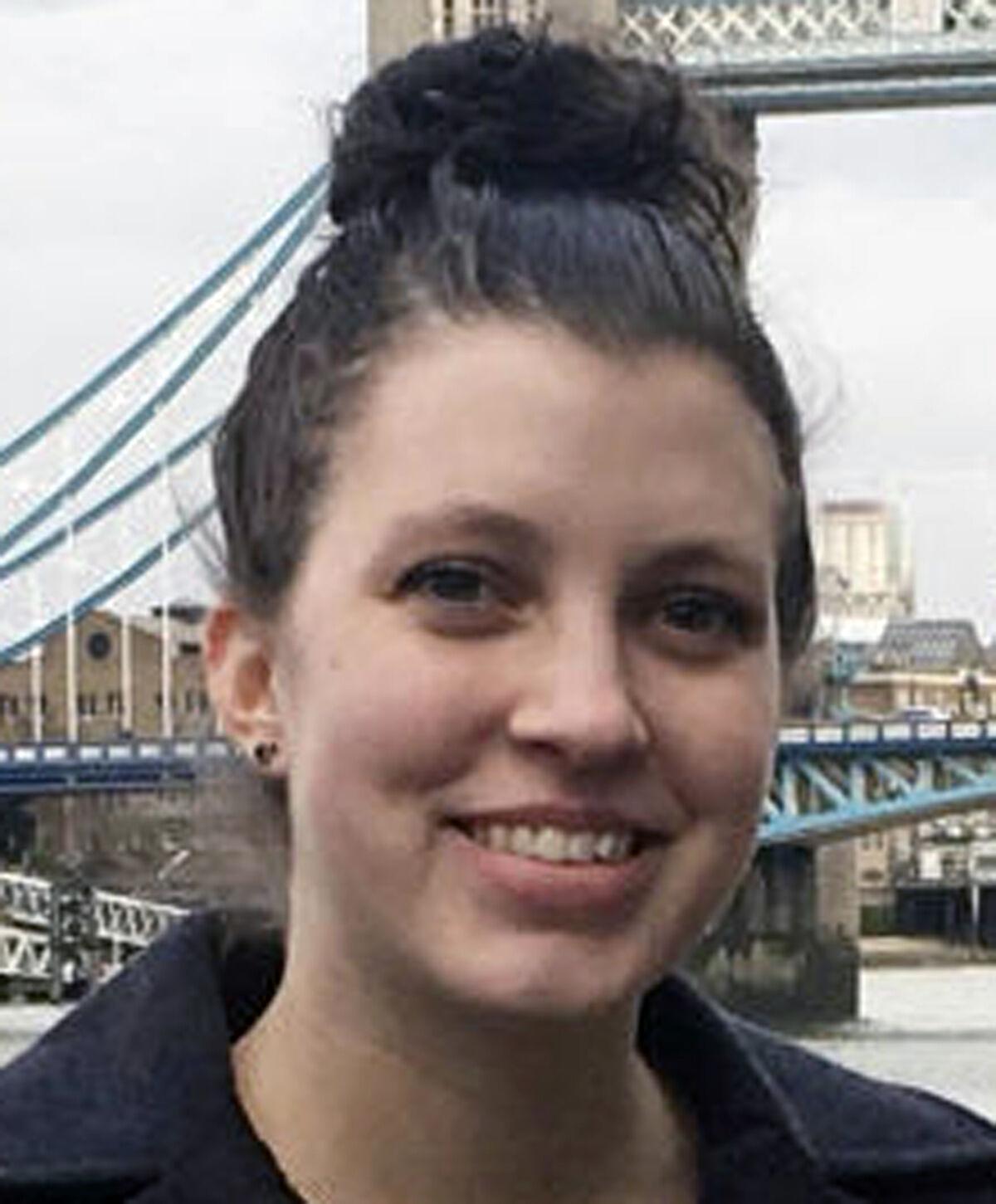 LYNDHURST — If you’re looking for a new furry friend, now might be the perfect time to adopt.

October is Adopt A Shelter Dog Month, and Shenandoah Valley Animal Services Center is running low on space for dogs after taking in a lot of dogs over the past few weeks, said SVASC director Hannah Richardson. As of Friday, 20 dogs are available for adoption, she said.

SVASC kennel director Erin Wiles said the number of dogs the shelter takes in varies throughout the year. The recent increase in intake might be because people are starting to return to work and children are going back to school after months of being stuck at home because of the pandemic, she said.

“Sometimes, you’ll have really nice, slow periods where you don’t get a ton of dogs,” Wiles said. “We saw that in the early spring, and I think it’s because people were home more often and their dogs were being around the clock monitored.”

Wiles said the shelter has been busy during the past two falls. There’s likely a link causing a large number of intakes during October, she said.

SVASC has seen an increase in out-of-town adopters, Richardson said. On Friday, a couple from Reston adopted a dog named Hamlet.

“Shelters up north already have a higher adoption rate, so that skyrocketed for them during the pandemic,” Richardson said. “People can’t find dogs in their area, so they have to search at shelters that are further away to find dogs that are available for adoption.”

Nick Tsvetanov and Madison Chandler traveled over two hours from Reston to adopt Hamlet, who came to the shelter about three weeks ago as a stray who was never reclaimed.

Tsvetanov said there’s a high demand for puppies and kittens in northern Virginia shelters, which get adopted quickly. Meanwhile, pets ages two and up available for adoption are less common in northern Virginian and tough to find as well. A friend recommended Tsvetanov and Chandler look into SVACS.

“Shenandoah was one of the highest-rated in this area, and I said, ‘hey let’s see what kind of dogs they have,’ and Hamlet seemed like a really good fit for us,” Tsvetanov said.

Tsvetanov and Chandler visited the shelter last week and said they immediately fell in love with Hamlet.

“It’s a special feeling knowing that you’re rescuing an animal and bringing home someone that you’re going to have for years and years to come,” Tsvetanov said.

The shelter stayed busy throughout the pandemic and had a ton of adoptions, Richardson said. It had tapered off, but there’s been a lot of adoptions in the past three weeks.

“The issue is they’re just coming in two to three times faster than they’re leaving,” Richardson said. “We’ve seen a lot of adoptions, but our intakes are still a lot higher.”

» Those interested in adopting through Shenandoah Valley Animal Services Center can see all of the available animals online at svasc.net.

The trail features a nearly one-mile long railroad tunnel designed by engineer Claudius Crozet and constructed by hundreds of Irish immigrants and enslaved African Americans over a period of 10 years shortly before the Civil War. Trailheads are accessible on both sides of the Blue Ridge Mountains.

City employees are on their way to seeing between $500 and $2,000 in hazard pay and bonuses.

Less than two weeks after the city of Waynesboro announced plans to host a reverse Christmas parade this year, the event has been cancelled because of increased COVID restrictions.

Organizations will offer hot meals to the community Thursday and Friday.

The trail features a nearly one-mile long railroad tunnel designed by engineer Claudius Crozet and constructed by hundreds of Irish immigrants and enslaved African Americans over a period of 10 years shortly before the Civil War. Trailheads are accessible on both sides of the Blue Ridge Mountains.

The school division had initially planned for middle school students to return on a hybrid learning model on Dec. 1. The model would have allowed for two days of in-person instruction and three days of remote instruction.

The Red Kettle Campaign will run from now until Dec. 24.

Stores in the area were less crowded this year because of the COVID-19 pandemic.

Many local businesses are starting their Black Friday, Small Business Saturday and Cyber Monday deals early or extending them through Christmas in order to decrease foot traffic and reach more consumers.

Nick Tsvetanov and Madison Chandler traveled from Reston to adopt Hamlet from the Shenandoah Valley Animal Services Center on Friday.