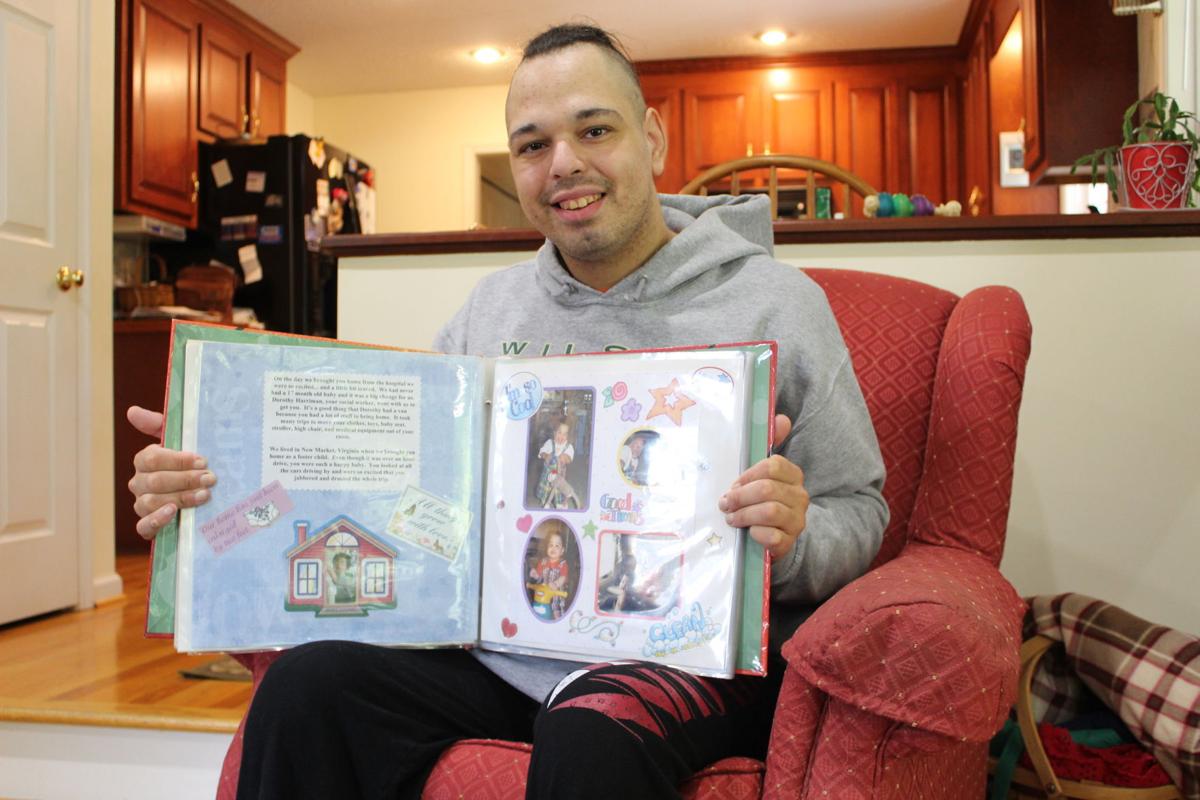 Kyle Young, 23, holds a scrapbook that shows photos from his first 17 months in UVa University Hospital in Charlottesville awaiting a kidney transplant and life as a child after the transplant. Twenty-one years later, Young is in need of a living kidney donor. 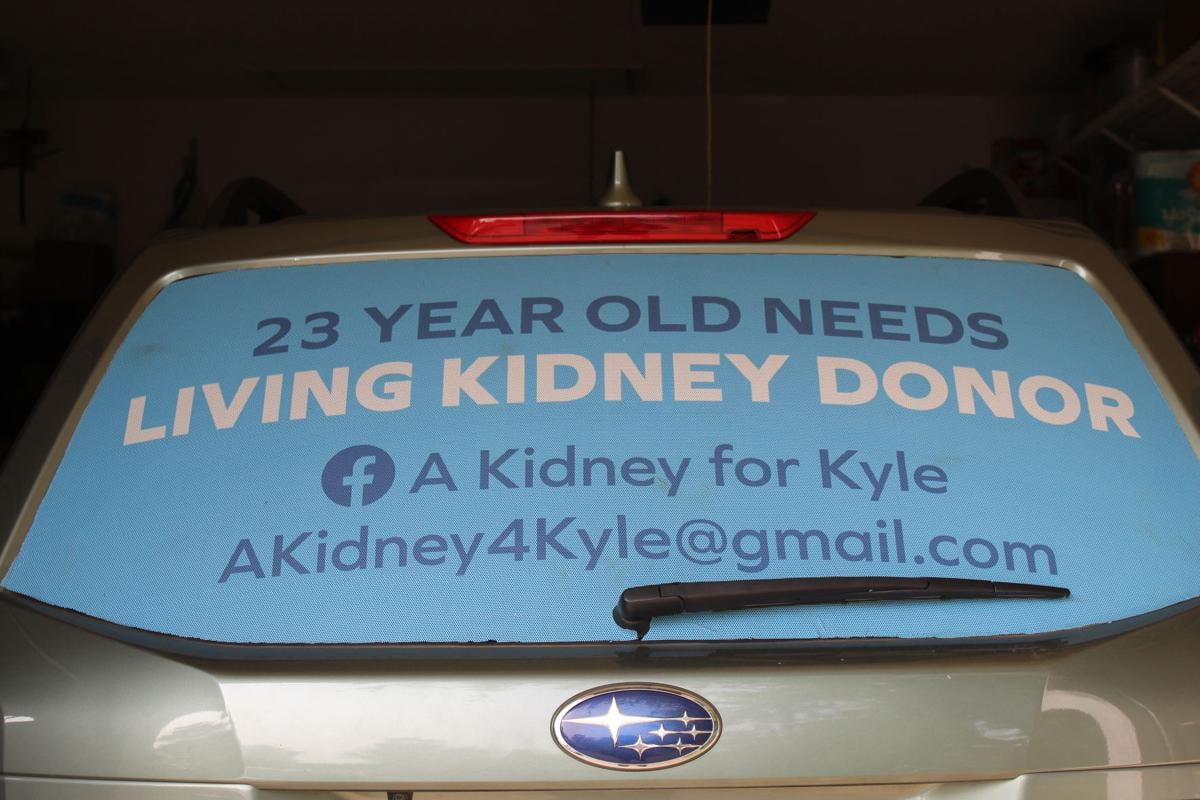 A decal on the Young family car asks passerbys to consider becoming a living kidney donor for 23-year-old Kyle.

FISHERSVILLE — Kyle Young remembers his childhood bedroom as a place to play as a kid and close the door as a teenager to get away when needed.

» Fill out a free, 10 minute screening with UVa.

» Living donation not for you? You can help by sharing Kyle's story from the Kidney for Kyle Facebook page, or consider volunteering or donating to the National Kidney Foundation.

Young, who lives in Waynesboro, has returned to his parent’s home in Fishersville — but instead of the playroom it once was, the walls are lined with cardboard boxes full of peritoneal dialysis, pill bottles lay on the table and, in an effort to keep the room sterile, a gate sits at the door to ensure the family dog doesn’t enter.

“When I was a kid, I used to play dress up in that room. I spent a whole lifetime in that room — shutting the door and having fantasies in there. And now this. It’s like we’re right back at the start,” Kyle said.

The 23-year-old is on a strict at-home dialysis schedule necessitated by kidney failure brought on by a Eagle Barrett syndrome. His days begin at 7 a.m. with the first round of dialysis treatment. He returns to his former bedroom again at 11 a.m., 3 p.m., 7 p.m. and 10 p.m. for the exchanges that can last up to an hour.

But the start Kyle refers to is his first kidney transplant before he was the age of 2. The first 17 months of his life were spent at UVa hospital in Charlottesville before receiving a kidney from a deceased donor.

Kyle’s mom, Roxane Young, recalls Memorial Day weekend in 1999 when they received special permission to skip one night of dialysis to take a camping trip. Upon returning, they received the life changing news.

“We got home and I was just unpacking. We got a phone call from the doctor and she was real nonchalant asking how Kyle was doing,” she remembered. “She finally said, ‘We have a kidney for Kyle, when can you come?’ We left immediately. I chased (Kyle’s dad, Steve) down to get his attention on the riding lawn mower. We were just so excited.”

At the time of Kyle’s first transplant, the life expectancy of a transplanted kidney was between 7 and 8 years. His kidney, however, has lasted him the past 21 years.

“We feel a lot of that is due to the level of management of medicines and fluid intake. What they told us to do for management of the transplanted kidney we took to heart. They’ve told us that had a lot to do with the kidney lasting 21 years instead of 8 years,” Roxane Young said.

In July 2019, Kyle’s lab results first started to show the kidney beginning to fail. He is now on the transplant list, which has an average wait time of 5 to 6 years. With a living donor that wait time could be eliminated, which is what the Young family is hopeful for.

In addition to reducing wait time, a living donors’ kidney has better long-term outcomes for the recipient, and a living donor can be anywhere in the U.S. while a deceased donor’s kidney is limited by geographical area.

After being placed on the kidney transplant list, Kyle’s dad, Steve Young, created a Facebook group, “A Kidney for Kyle.” With more than 300 members, Steve Young shares updates on Kyle and information on becoming a living donor in the hopes it will reach a potential match. The family also has a decal on their car that reads, “23-year-old needs living kidney donor” with their contact information.

“I put a lot of energy into doing the things that are helpful. I need to have an outlet, and that’s a useful way where if I’m having some anxiety the solution is to work on getting the donor information out and spread the word,” Steve Young said.

To become a living donor, the donor should start with a free online screening through UVa that takes no more than 10 minutes to complete. Living donors should list Kyle Young as recipient and Steve Young as next of kin. From there, potential donors have their physical and mental health screened over a period of months before the transplant occurs.

Someone interested in donating their kidney doesn’t have to be a direct match for Kyle, Steve Young added. Through paired exchange, living donor kidneys can be swapped with another transplant candidate so each recipient receives a compatible transplant.

The living donor also has no medical expenses, but would have to account for time off of work for recovery.

“I would say to (a potential living donor) don’t be scared,” Kyle Young said. “It’s like watching a horror movie for the first time. It doesn’t hurt when you peek. If you end up not being the right person to donate, it’s OK.”

Kyle said his focus has always been on his family, friends and his fiance, but “a kidney would be an additional part of the family.”

When he finds himself in his childhood bedroom needing to escape from the reality of five dialysis treatments a day, he turns to Lady Gaga’s music.

“Through her interviews and her music videos, I’ve learned to relax,” he said.

Before his kidney began to fail, Kyle attended Lady Gaga’s “Joanne” concert in Charlottesville, an experience he hopes to have again after he receives his new kidney.

“I saw her concert, and I was already impressed by her, but I was in there thinking, ‘This is a surreal experience.’ She mentioned the Charlottesville (Aug. 12, 2017 Unite the Right) attack, and I said ‘She cares.’ And if she heard this, I imagine she would do something,” he said.

Two of Kyle’s favorite Lady Gaga songs are the piano version of “Joanne” because it reminds him of his grandmother Rose, and “Stupid Love” because of his love-hate relationship at times with his kidney.

“I definitely love all the medical team and what they’re doing for me. I’m definitely loving dialysis because it’s keeping me alive for the most part. But it’s pretty stupid to look at it all and think, ‘Is this really what I have to do? It’s very tedious,” Kyle Young said.

Reflecting on his experience, Kyle said he chooses to stay positive.

“It’s a part of life. You can be scared because of this. Yes, there’s a lot of medical knowledge that you need to know and be prepared for,” Kyle Young said. “I’ve been through this rodeo all my life basically, but the real deal was when I was itty bitty still in the hospital. I didn’t know what was going on back then, but now I know and looking back on all those baby pictures and seeing the stories — things have changed.”

Virginia State Police are investigating three accidents — a fatal crash on Wednesday, one involving a moped on Thursday morning and another including two cars on Monday.

Virginia State Police are investigating three accidents — a fatal crash on Wednesday, one involving a moped on Thursday morning and another including two cars on Monday.

Twenty dogs are currently available for adoption at the shelter.

Two Waynesboro residents were arrested this week in connection to vehicle break-ins in the city.

Waynesboro police and fire department personnel responded to a two-car accident at the intersection of Rosser Avenue and Lew Dewitt Boulevard just before midnight Tuesday.

After painting a mural near Waynesboro High to promote pedestrian and biker safety over the weekend, a new citizen-led group is hoping to continue making the community more pedestrian friendly.

A new mural designed and painted by students is going up on the Poplar Avenue and Main Street intersection near Waynesboro High School.

Cline, the representative for Virginia’s 6th congressional district, canvassed in Waynesboro and Roanoke on Saturday.

The closure of the 7th street railroad crossing is contingent on construction of a new crossing along the Southern Connector Road, which is expected to be completed in 2023.

Waynesboro Democratic Committee seeking volunteers for Get Out the Vote, Election Day

Volunteers can help with Get Out the Vote on Saturdays and Sundays at 9 a.m., noon and 3 p.m.

Kyle Young, 23, holds a scrapbook that shows photos from his first 17 months in UVa University Hospital in Charlottesville awaiting a kidney transplant and life as a child after the transplant. Twenty-one years later, Young is in need of a living kidney donor.

A decal on the Young family car asks passerbys to consider becoming a living kidney donor for 23-year-old Kyle.