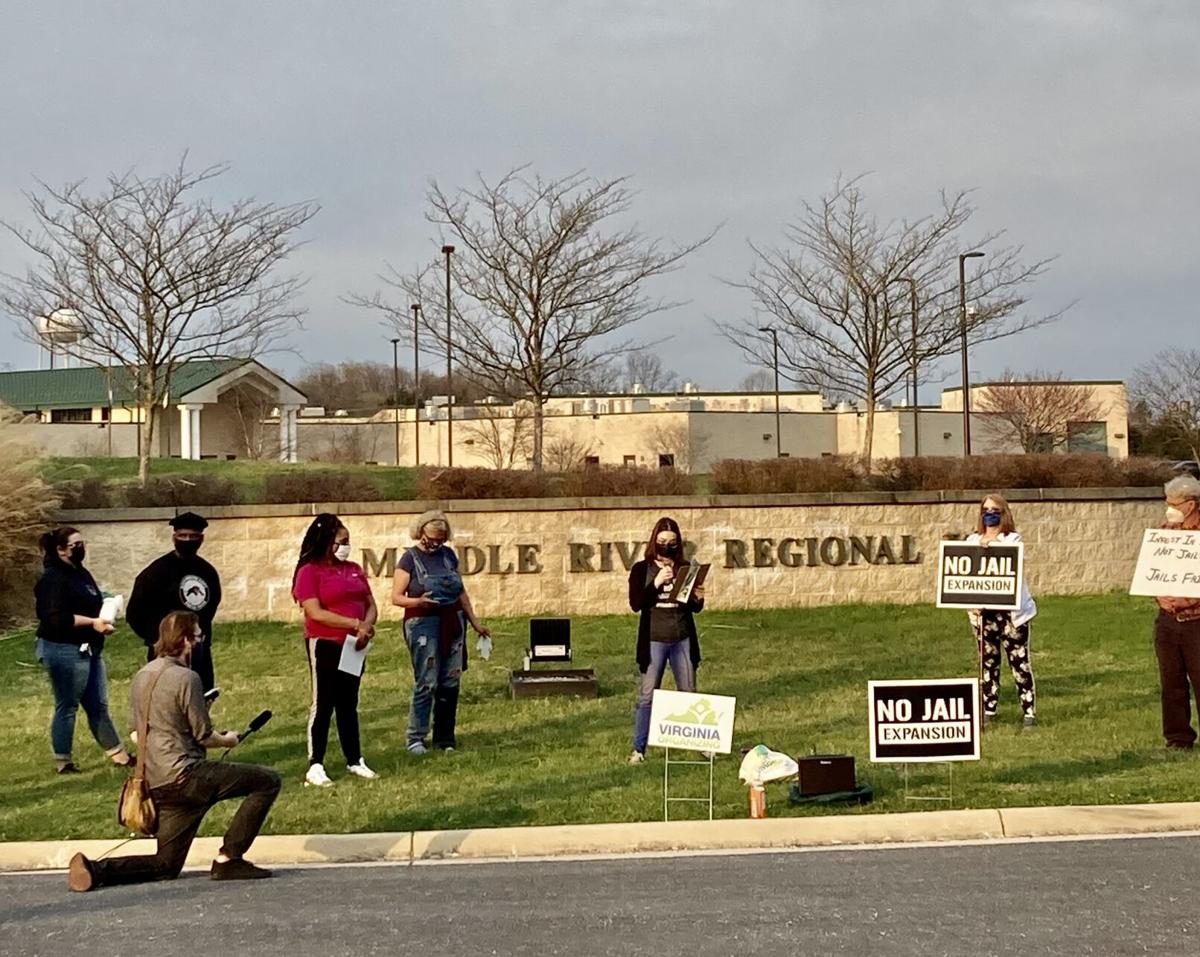 Members of Virginia Organizing’s Waynesboro chapter during a rally to oppose the potential expansion of Middle River Regional Jail in Verona. 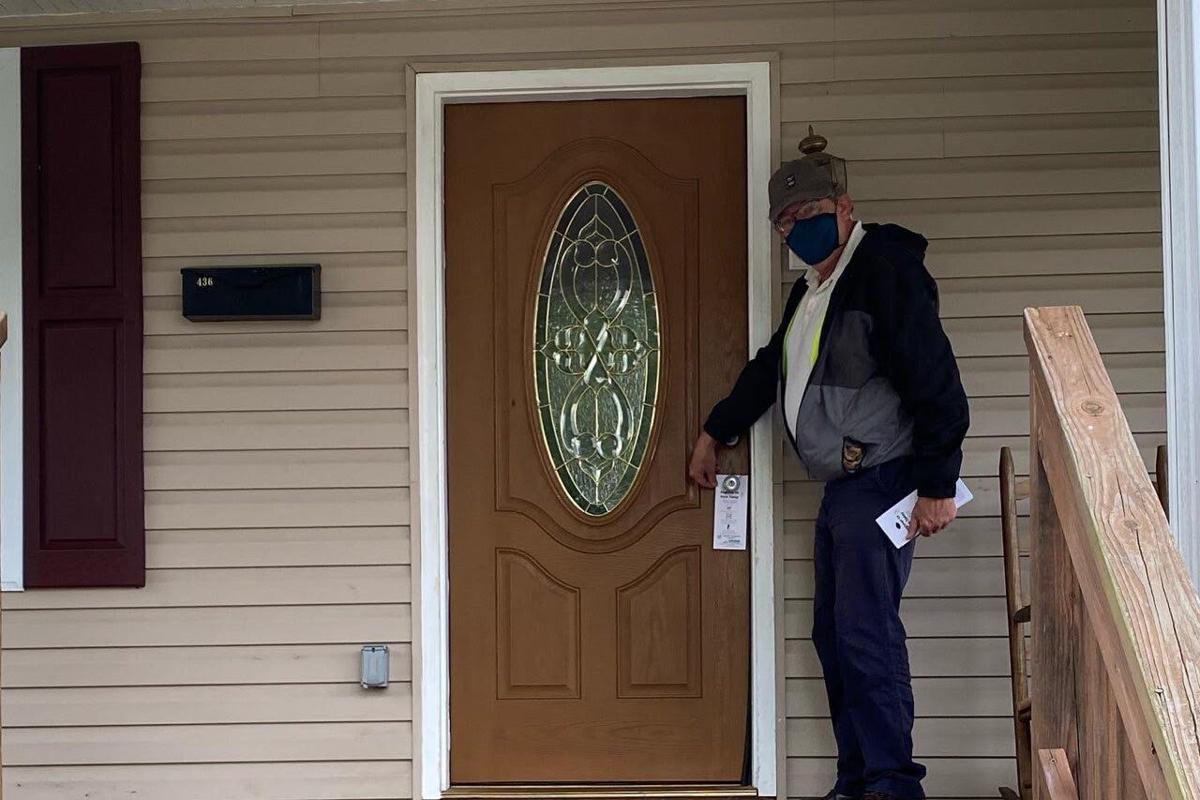 A member of Waynesboro’s chapter of Virginia Organizing hanging a doorknob sign on a house in the city.

Waynesboro residents who want to get involved in a variety of community issues may be interested in Virginia Organizing — a non-partisan, grassroots organization focused on challenging injustice by empowering communities.

While Virginia Organizing itself began 25 years ago in Southwest Virginia, a chapter in Waynesboro launched just this summer. Waynesboro is now the 16th chapter in Virginia, joining others in Charlottesville, Harrisonburg, Augusta County, Richmond and beyond.

“The main thing I think we do for Virginia Organizing and for our chapter is facilitate organizing,” Waynesboro member Mark Carpenter said. “The power is ultimately in the hands of the people. If we’re talking to someone about housing, for example, almost everyone knows there are housing issues, but they might not know how and why it happened. That information is very valuable. When they know the context, they can better engage and act and know where they stand.”

In addition to conducting research and talking to members of the community, the Waynesboro chapter has already been busy attending local government meetings, meeting with state and local representatives, and most recently organizing efforts opposing the potential expansion of Middle River Regional Jail.

“I see the role of the chapter as supporting community needs, and to do that we want to support the community and understand the community,” member Vic Monti said. “It really comes down to whatever the community feels is important.”

In the future, the group said they hope to tackle a campaign for equitable housing in Waynesboro and host forums for the community to attend.

“One huge advantage to forums is to get the issue out there, let them know the chapter as a group is taking on the issue, and then the forum can be an opportunity for people to understand the chapter and we can get feedback. We’re looking forward to serving the community and being involved,” Monti said.

“We encourage people to get involved as much as they can understanding that a lot of people are short on time. When you’re working full time, it’s not always easy, but there’s plenty to do. There’s a lot of options and there’s a lot of opportunities, so pretty much the sky’s the limit,” said Zink, who noted she had no prior experience in community organizing before joining Virginia Organizing.

Fellow member Aline Jackson Diggs agreed that everybody can have a role in the organization and in helping the local community.

“We have so many different populations within this city and oftentimes we forget that we are living different lives but have the same goals. If we can be a resource to bring that information, condense it and hand it off to them then that’s what we need to be,” she said. “It’s about taking the time together, being open, honest, communicating and learning how to problem solve in order to make a difference.”

» Sign up for newsletters, event notices and more by emailing AmandaDameron@virginia-organizing.org.

» May 22 “Paint in the Park” fundraiser in Ridgeview Park.

Pfizer shot expands to US children as young as 12

Colemon, 73, will receive an Honorary Associate of Humanities degree from the college, the first-ever honorary degree awarded in its 54-year history.

Tina Kiracofe, ACPS director of instruction and instructional technology, gave details about June Academy and what virtual learning might look like for students next year during Thursday night's monthly School Board meeting.

May take weeks to clear U.S. 250 after rockslide

Rockfish Gap Turnpike, also known as U.S. 250, was shut down Monday as chunks of greenstone bedrock broke free and slid down the steep mountain side sandwiched between Interstate 64 and the turnpike.

The Rivanna Trails Foundation is petitioning the Albemarle County Board of Supervisors to move forward with a feasibility study of the path from city to the Blue Ridge Tunnel.

“She was totally devoted to doing what she could to make people’s lives better," Del. John Avoli said. "That’s Anne Seaton in a nutshell."

UVa, Virginia Tech and William & Mary received a record number of applications, which has caused them to wait-list more high school students.

Graduates and their families had the chance to get their pictures taken in front of the Armstrong building on campus Saturday morning.

Members of Virginia Organizing’s Waynesboro chapter during a rally to oppose the potential expansion of Middle River Regional Jail in Verona.

A member of Waynesboro’s chapter of Virginia Organizing hanging a doorknob sign on a house in the city.