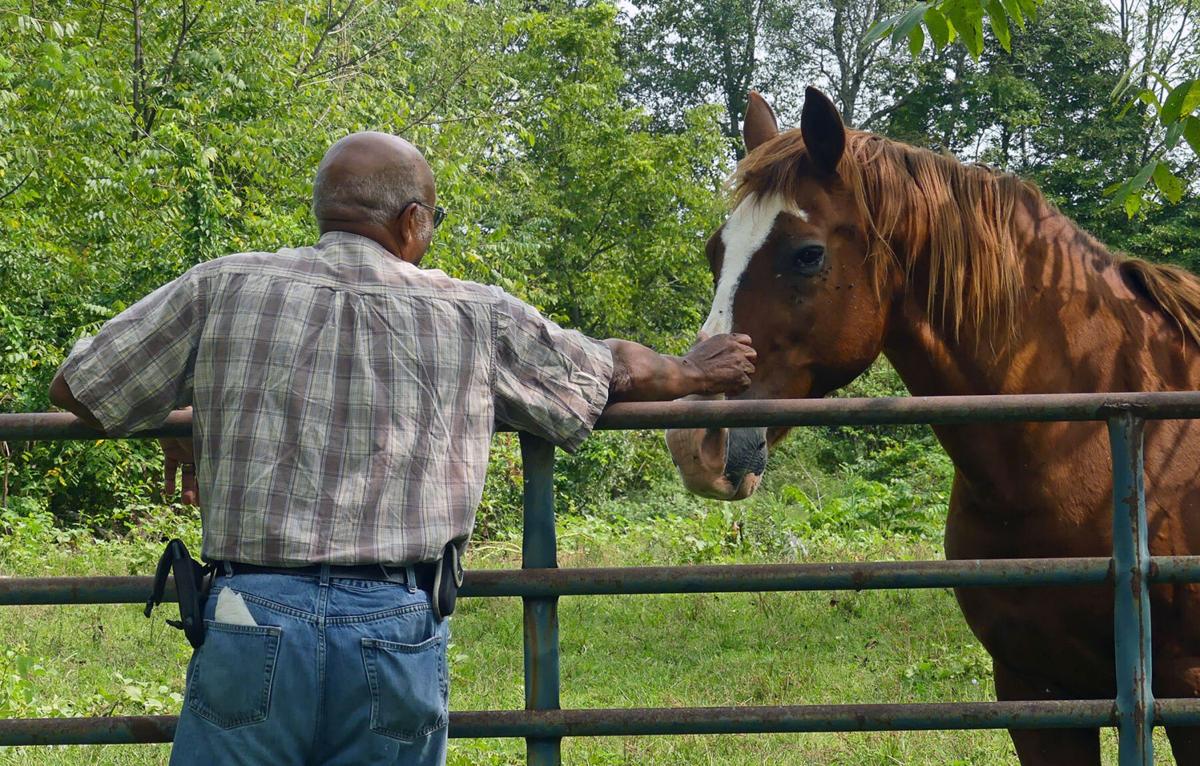 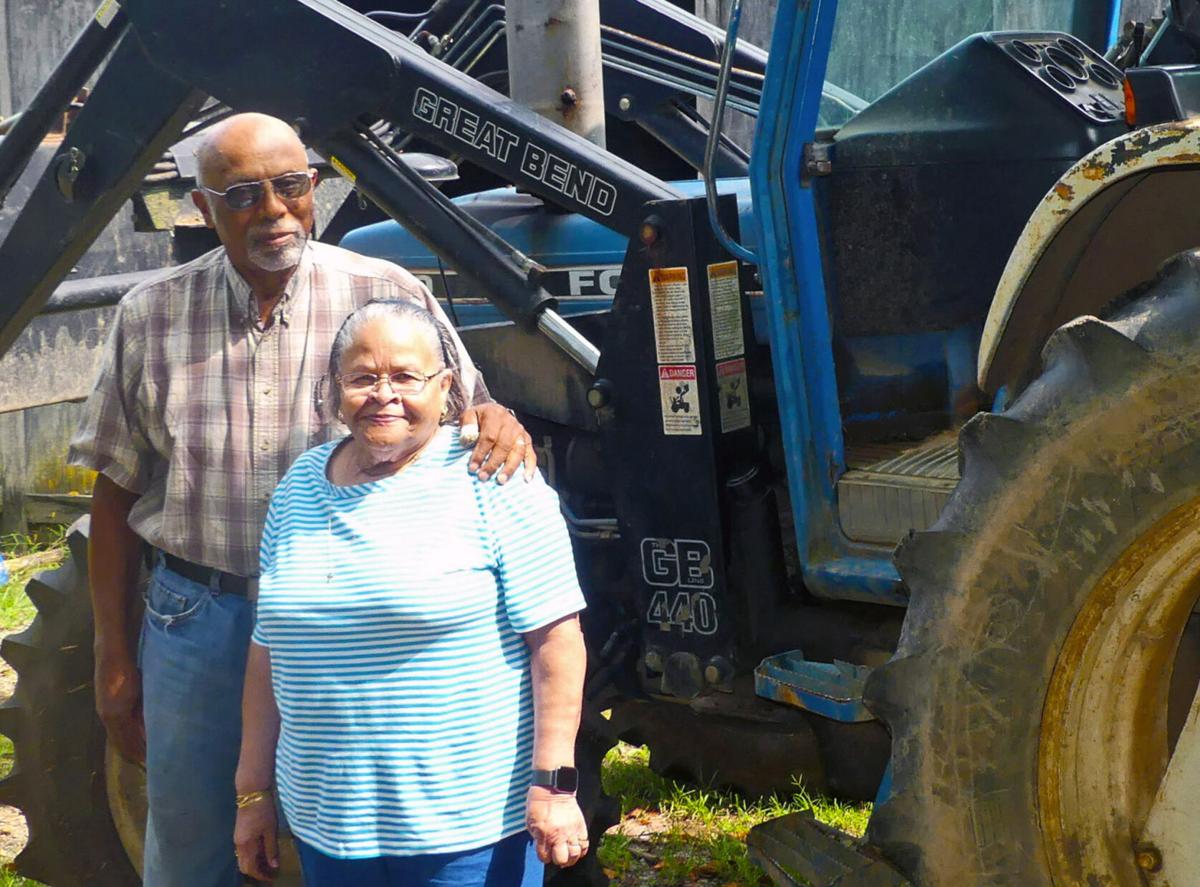 Hidden Springs Farm, operated by Walter and Joan Brown is not only a Virginia Century Farm, but is one of the last African American farms in Augusta County. Here the Browns stand next to one of the essential pieces of machinery on the farm — the tractor. 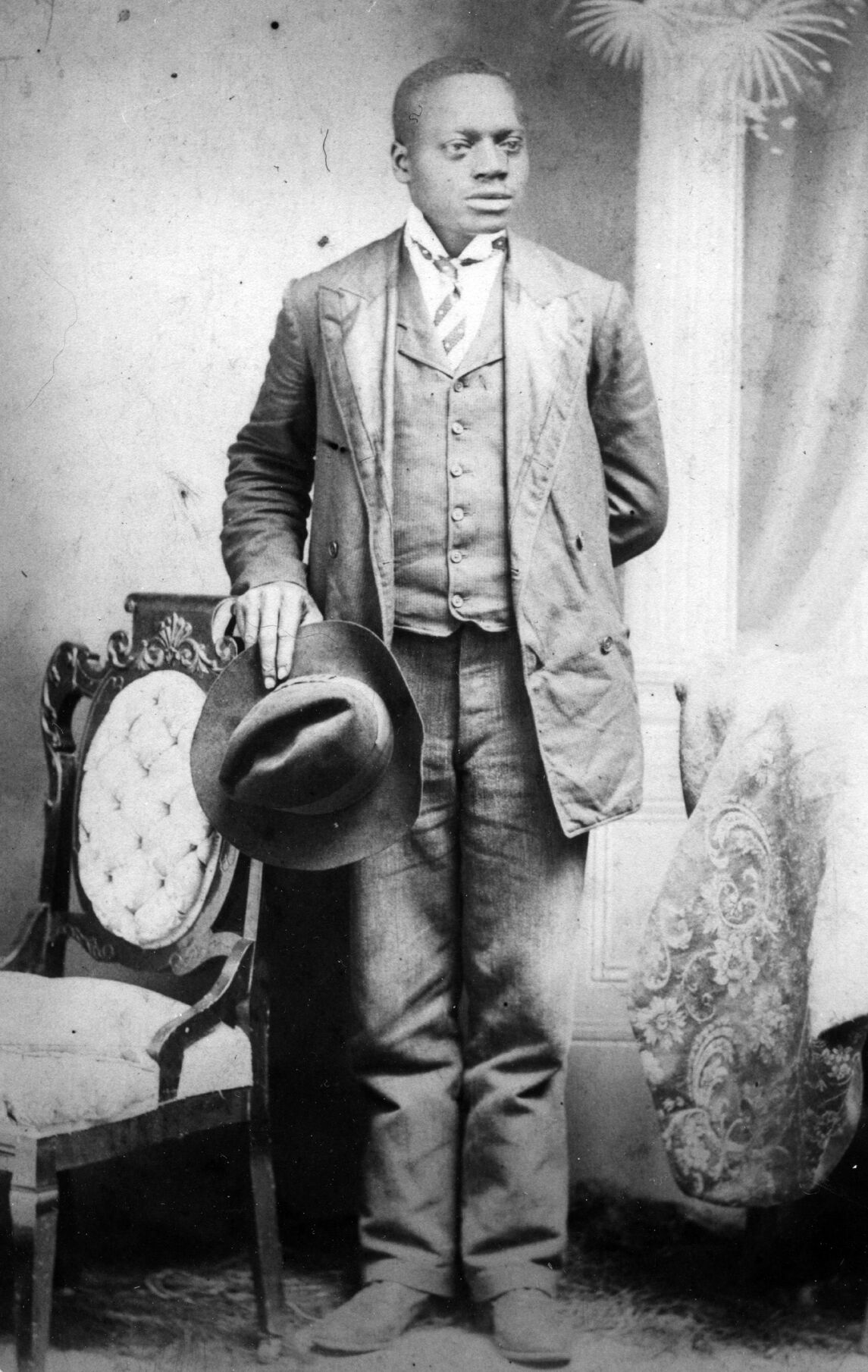 Noah Brown, Walter Brown’s father, believed owning land and getting an education were two of the most essential pieces of life. 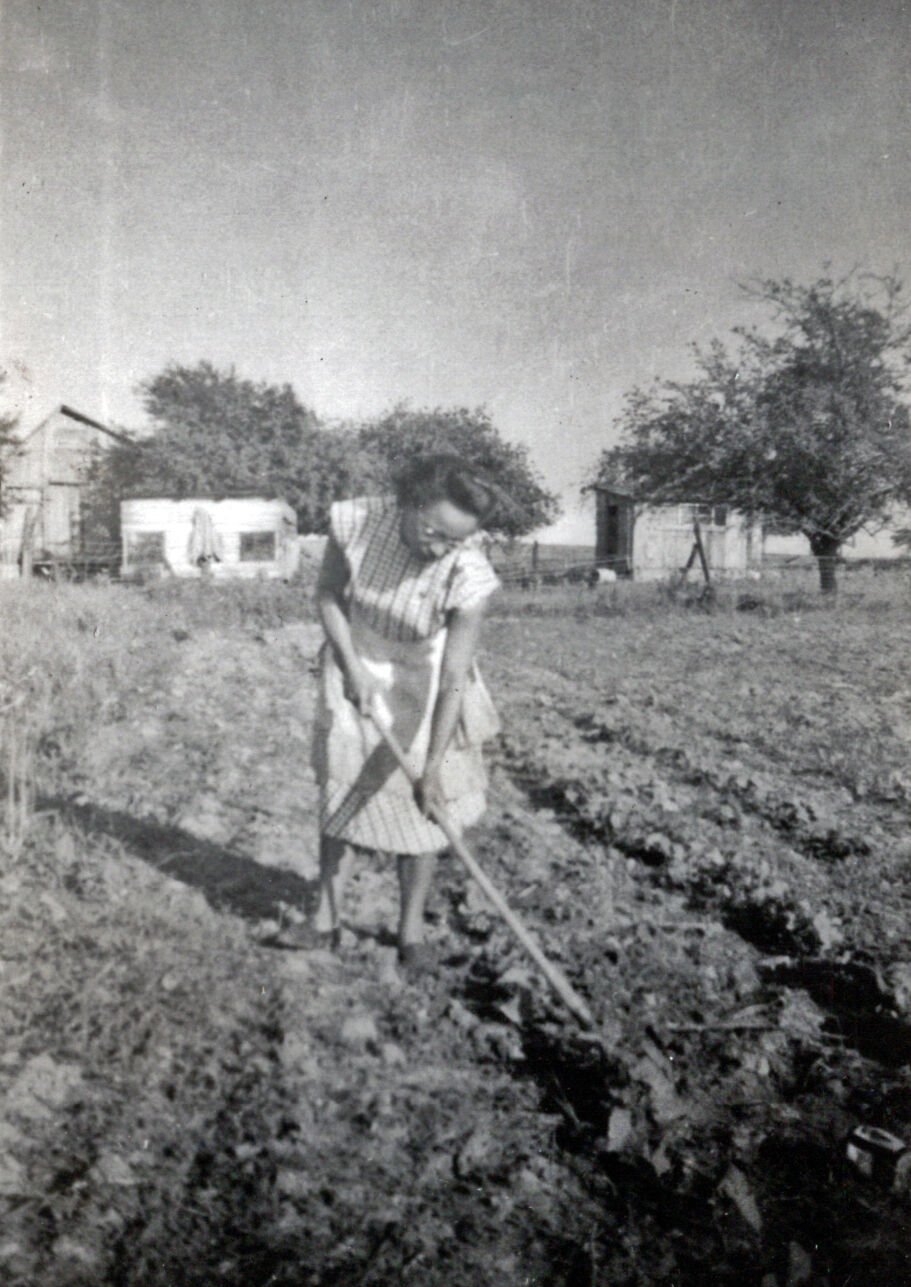 Nobody went hungry on a farm in Augusta County according to Walter Brown. His sister, Ester (Brown) Williams, is seen working the garden on the family farm. 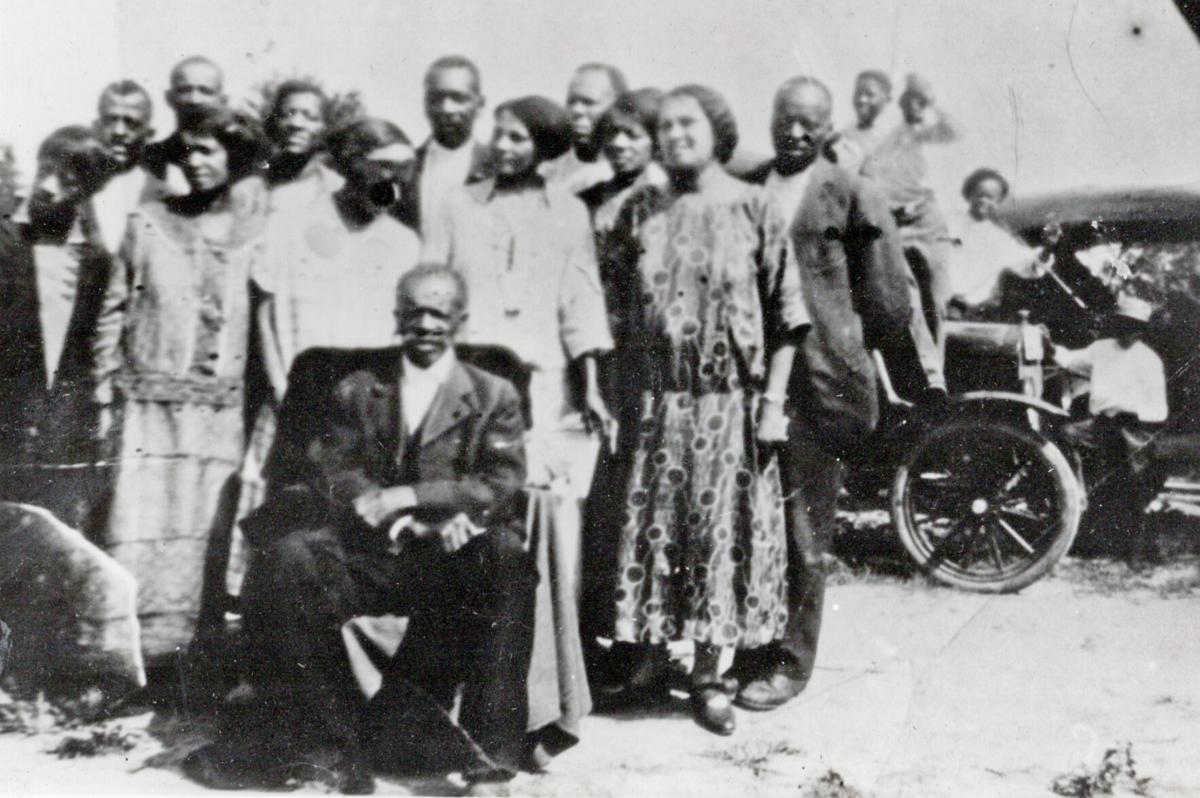 Walter Brown’s grandfather, Charles Brown (seated), is surrounded by his family in this photo. Charles Brown, born a slave, was the first member of the family to own land and instilled in his children and grandchildren the value of owning land. 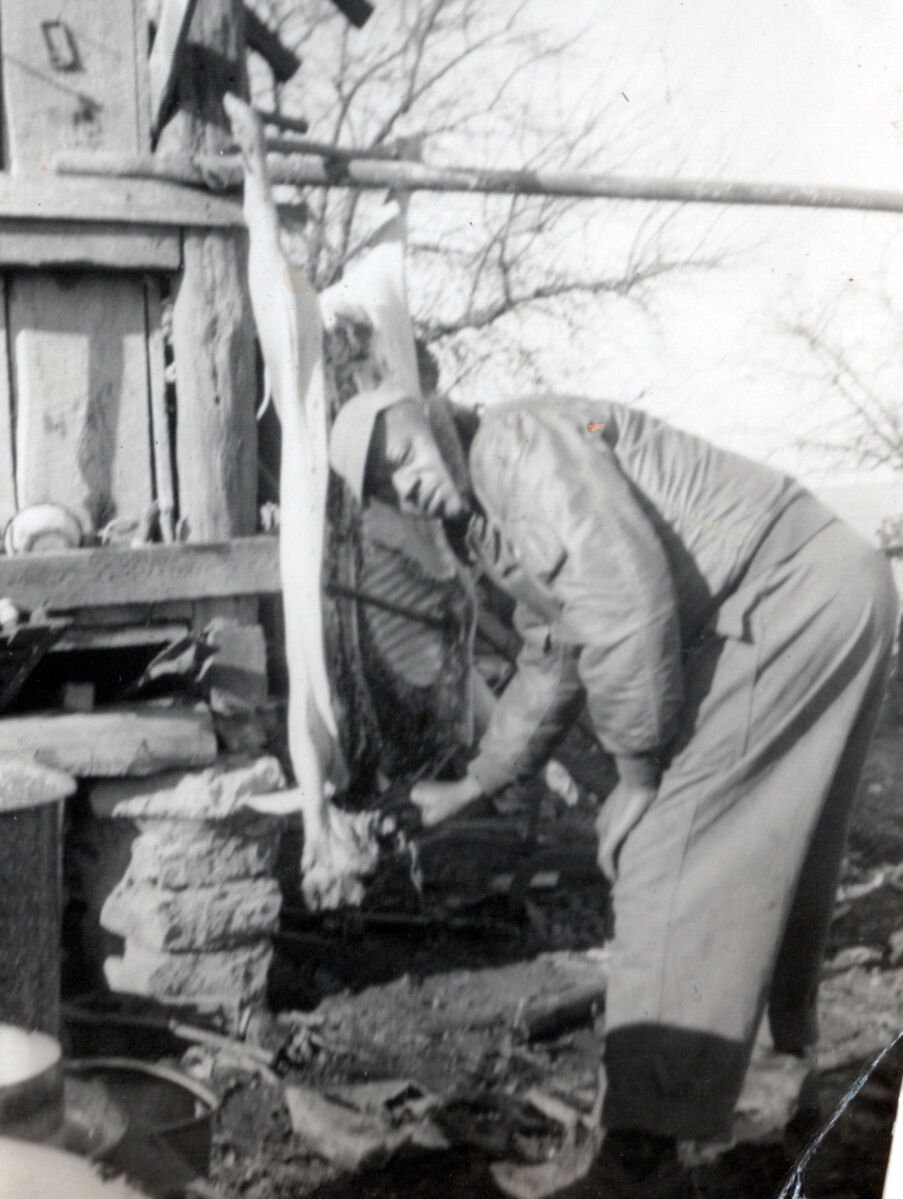 Hog butchering time was an important activity on any farm in the Shenandoah Valley. Seen here is Walter’s brother, Noah Brown Jr., helping with butchering at Hidden Springs Farm.

NANCY SORRELLS For The News Virginian

ARBOR HILL — Joan and Walter Brown have given a lifetime of service to their community and built a legacy for descendants. The Browns long ago retired from public service careers as a police officer and a public school teacher, but they continue to volunteer and operate a small family farm in Augusta County.

You would think that after 54 years of marriage, it might be time to slow down, but that does not appear to be the case. As African Americans, the pair gained strength from living principled lives in a sometimes-unprincipled world, often swimming upstream against educational and societal challenges.

Born on the family farm where he still lives, Walter, 82, was one of eight siblings. Only he and his 100-year-old sister in New York remain.

“I thought growing up on a farm was great. We milked every morning, fed the hogs and did whatever was necessary. We would take the horse and wagon with our grain to the mill in Staunton or Swoope. Those places were nothing but dust clouds,” he recalled of the mills that billowed flour dust into the air as they ground the grain.

He recalled feeling a sense of privilege from growing up on a farm owned by his father, Noah Brown.

“I can’t ever remember missing a meal. Did we have money? No. But we had the necessities of life,” Walter said.

Owning land and getting an education were paramount in his family. Although his father had only a third grade education, he worked hard to make sure that his children had the best education possible. When Augusta County dragged its feet about providing better schools for area Black children, Noah Brown hooked up his team of horses and helped dig the foundation for the new Augusta County Training School (ACTS) where Walter would go to school and Joan would later teach.

When the students going to ACTS had no bus, Noah Brown bought a Model T truck, cut off the back and built a cab onto it and then he or Walter’s mother, Mary Ella, drove the kids to school, exacting a promise from the school board to pay for gas.

Joan, who grew up in the West Virginia panhandle where her mother cleaned and her father worked at a paper mill, wanted to be a pediatric nurse. An academic scholarship paid for most of her education at the historically Black college of Bluefield State. She then switched schools and focus, becoming the only African American in her graduating class at Shepherd College. Her degree in education gave her certification in health and physical education and driver’s education with a minor in biology.

A friend she met through a church conference told her about a teaching position in Augusta County and that’s how she arrived in 1963 at ACTS. It was three years before the county’s public schools would desegregate. Although the material inequalities between the white and black schools were obvious, Joan recalled, the love, respect, and high standards that flowed from the principal down to the teachers and the students created a high quality, nurturing environment.

Walter’s career path was more circuitous than that of his wife. After graduating from ACTS, he went into Staunton to complete high school because Augusta County did not provide any high school education for African American students. He then spent the better part of three years at Norfolk State majoring in industrial education. When money got tight, he came home and soon enlisted in the army.

After three years in the army, with almost half of it in Korea, he returned home and soon found himself taking the entrance exam for the Staunton Police force.

The year 1966 was a banner year for Joan and Walter. They met at Smokey Row Baptist Church and were married on the Brown family farm. That was also the year that the public schools desegregated and Joan moved to Wilson Memorial High School where, as the girls’ softball coach, she quietly made history as the first Black coach in Augusta County’s integrated schools. Including her time at ACTS, she would teach 32 years at two high schools, ACTS, and a middle school while coaching volleyball, track and cheerleading.

It was a fulfilling career that she would do all over again, she said.

Her philosophy was simple: “I told the kids, I don’t know what color I am until I look down. I am a teacher first, and I don’t care what color you are either — black, blue or green,” she said with a smile.

After acing the police entrance exam, Walter became just the second Black member in Staunton’s police department. Soon another man joined them and, together, they changed the city.

“The three of us made a pact that we would not take ‘Black assignments.’ (Such as only working Black community gatherings.) We were going to be police officers, not Black police officers,” he said.

Walter went on to attain the first Black officer ranking in the Staunton force, eventually making captain. He also helped found the regional police training academy that gained state and national recognition. As a result, he traveled all over the country helping other law enforcement agencies start up police academies.

That was back in the seventies and the idea of a black police officer in charge of training was a new concept to many.

“When they saw Lt. Brown coming, they weren’t expecting ‘this’,” Walter said, while pointing to his brown skin.

Although his profession was law enforcement, Walter’s passion was farming. He has continued his father’s farm, raising beef cattle and caring for the land. Hidden Springs Farm, named for its powerful 300,000-gallons-per-day spring, was the first in the county to incorporate a USDA easement to protect that water.

These days, farm operations have slowed to a few cattle and an occasional crop, but Walter is proud of being one of the last African American farmers in Augusta, a family tradition that stretches back to just after the Civil War when his grandfather Charles Brown bought a farm in southern Augusta, then added the current farm in 1896. That land passed to Noah and then Walter.

Years ago, Walter registered his farm as a Virginia Century Farm, a designation earned only if the farm has been in the same family for more than one hundred years. The official designation means a lot to the Browns.

“There is a lot of pride in it,” he said. “At one time, in the Arbor Hill area, there were about 2,500 acres of African American owned farmland. Today, it is about 100 acres. The wealth of the Black community has been lost and that is true all around Augusta County.”

A century ago, Walter and his brother calculated that there were 10,000-12,000 acres of Black-owned farmland in the county. Today, Hidden Springs is among the last.

“One time, Dad and a white neighbor were working together on a fence and the neighbor said ‘someday all of this land will be mine.’ My dad silently vowed that that was never going to happen and he instilled in his kids to hang onto their land,” he said.

“There is pride in having your own farm. I am going to hold onto this for my two daughters and my nieces and nephews. I know that it makes them feel good to have that legacy,” he said.

Walter paused and added one more powerful thought about why Hidden Springs Farm, a Virginia Century Farm, is so important.

“Owning a farm is the reason why my grandfather, an illiterate Black man who was born a slave, could vote. It was because he had land. That is the truth of it.”

During Monday's public comment period, three Waynesboro residents called on Waynesboro City Council to remove a member of the Cultural Commission over a social media post.

Hypes became a fan of Mad Skillz after hearing his first yearly "Rap Up" in 2002.

After exploring the state with his dog Sjokolade last year, Matthew Johnson was inspired to start a new company.

The service will connect Staunton, Fishersville and Waynesboro to Charlottesville and Albemarle County.

Waynesboro students return to hybrid instruction despite opposition by some teachers

As students return to the classroom for in-person learning, one Waynesboro teacher urges the board to consider all-virtual instruction until teachers have the chance to get their COVID-19 vaccines.

More "Waynesboro at Work" episodes will air the last week of each month.

Hidden Springs Farm, operated by Walter and Joan Brown is not only a Virginia Century Farm, but is one of the last African American farms in Augusta County. Here the Browns stand next to one of the essential pieces of machinery on the farm — the tractor.

Noah Brown, Walter Brown’s father, believed owning land and getting an education were two of the most essential pieces of life.

Nobody went hungry on a farm in Augusta County according to Walter Brown. His sister, Ester (Brown) Williams, is seen working the garden on the family farm.

Walter Brown’s grandfather, Charles Brown (seated), is surrounded by his family in this photo. Charles Brown, born a slave, was the first member of the family to own land and instilled in his children and grandchildren the value of owning land.

Hog butchering time was an important activity on any farm in the Shenandoah Valley. Seen here is Walter’s brother, Noah Brown Jr., helping with butchering at Hidden Springs Farm.