CHARLOTTESVILLE — Despite the dismissal of several claims, a First Amendment federal lawsuit from a former University of Virginia medical student will continue following a recent judge’s order.

The lawsuit was filed on behalf of Kieran Bhattacharya in September 2019 in the U.S. District Court for the Western District of Virginia and accuses the university of violating his First Amendment rights and his 14th Amendment right to due process and conspiring to interfere with his civil rights and injure him professionally. Named as defendants are the Rector and Visitors of UVa and more than 20 members of the UVa faculty and administration.

All claims save for the First Amendment violation allegations were dismissed by U.S. District Judge Norman K. Moon in a March 31 order.

Though UVa does not comment on specifics of pending litigation, UVa spokesman Brian Coy said it was worth noting that the ruling was based on the facts as alleged by the plaintiff.

"It is worth noting, however, that the court’s recent ruling is based only on the facts as alleged by the plaintiff, and must accept all of those allegations as true at this stage of the proceedings," he said. "All but one of the claims in this case have been dismissed, and we are confident that the remaining claim is without merit." 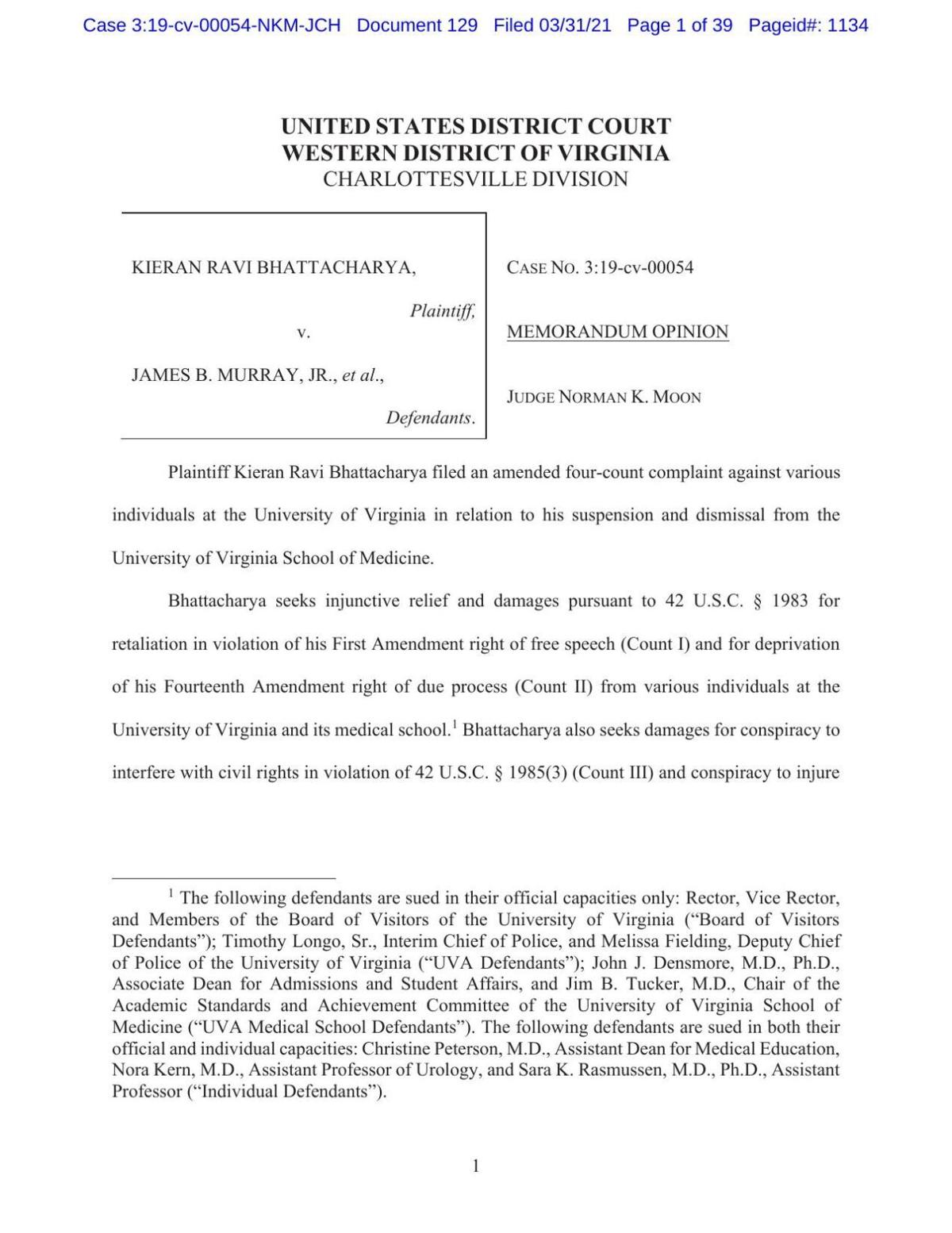 As part of his memorandum opinion, Moon summarized the arguments as presented by Bhattacharya. According to the plaintiff, the lawsuit was spurred by a series of events that Bhattacharya claims began with a panel discussion about microaggressions and ended with his suspension and eventual expulsion.

Per the opinion, in November 2018, Bhattacharya attended a panel on microaggressions led by UVa professor Beverly Colwell Adams. The panel began with Adams giving a roughly 17-minute presentation about her research on microaggressions, which are generally defined as a “statement, action, or incident regarded as an instance of indirect, subtle, or unintentional discrimination against members of a marginalized group such as a racial or ethnic minority.”

Following Adams’ presentation, Bhattacharya asked her some questions about microaggressions, a transcript of which is partially included in the opinion and is based on a recording of the event.

Per the transcript, Bhattacharya asked Adams whether it was a “requirement, to be a victim of microaggression, that you are a member of a marginalized group.” After Adams said no, Bhattacharya mentioned an earlier-presented definition and said Adams’ answer was “contradictory.”

Adams responded that her earlier definition was “generalized,” and can be extended beyond that to people who are sometimes not part of a marginalized group.

“There are examples that you would think maybe not fit, such as body size, height, [or] weight,” the transcript portion reads. “And if that is how you would like to see me expand it, yes, indeed, that’s how I do.”

The exchange lasted approximately five minutes before a fellow panelist cut in and said they should open the floor to other questions.

Following the discussion, Nora Kern, an assistant professor of urology who helped to organize the panel and attended it, filed a Professionalism Concern Card against Bhattacharya.

Kern’s card identified “respect for others” and “respect for differences” as areas of concern and cited Bhattacharya’s conduct during the panel.

“This student asked a series of questions that were quite antagonistic toward the panel,” Kern wrote. “He pressed on and stated one faculty member was being contradictory. His level of frustration/anger seemed to escalate until another faculty member defused the situation by calling on another student for questions.”

After a meeting with Christine Peterson, assistant dean for medical education, in which Bhattacharya claims his questions at the panel were “barely mentioned,” and another meeting with the associate dean for admissions and student affairs, Bhattacharya received a letter from the Academic Standards and Achievement Committee.

The letter described Bhattacharya’s behavior as “unnecessarily antagonistic and disrespectful,” and recommended he consider getting counseling “in order to work on your skills of being able to express yourself appropriately.”

When returning to UVa from Thanksgiving break that year, Bhattacharya received an email from the associate dean for admissions and student affairs that he would need to first be seen by UVa Counseling and Psychological Services. Bhattacharya questioned the university’s ability to “mandate psychiatric evaluations,” and was informed soon afterward that the Academic Standards and Achievement Committee would be meeting that day to discuss his enrollment status.

A motion to suspend Bhattacharya passed unanimously and he was suspended immediately with the option to petition to return to the School of Medicine in August of 2019. Bhattacharya soon appealed the decision but the appeal could not move forward following a no-trespass order against him, preventing him from returning to UVa for four years.

After pressing for more information about the no-trespass order, UVa’s deputy police chief, Melissa Fielding, told Bhattacharya that he had “engag[ed] in conduct that threatened the well-being of members of the community through various social media platforms,” and because “[t]he conduct [Bhattacharya] directed at members of the university community compromised safety and security and caused fear.”

Bhattacharya claims that UVa has not provided him with specific posts or comments that back up the university’s no-trespass order.

Though Moon dismissed most of Bhattacharya’s claims, his memorandum opinion allowed the First Amendment claims to proceed.

According to Moon, Bhattacharya’s comments and questions during the microaggression panel were directed at the professors participating in the panel during a time designated for asking questions and were academic in nature.

“These comments and questions might be forward or pointed, but — as alleged — they did not materially disrupt the discussion or substantially invade the professor’s, or anyone else’s, rights,” Moon wrote.

They were also not “vulgar,” “lewd,” “indecent,” or “plainly offensive,” despite arguments from the defendants that Bhattacharya’s comments met these criteria because they were “insulting, disrespectful, and uncivil” to the faculty.

“At worst, they were aggressive critiques,” Moon wrote.

In terms of the no-trespass order, Moon pointed to arguments from the defendants that Bhattacharya has not alleged enough facts about the social media statements that drove UVa’s decision to issue the order and that these statements were not protected speech because they were “true threats” related to the school.

“At this stage, however, the Court concludes that Bhattacharya has sufficiently alleged that his statements were protected speech,” Moon wrote.

For the remaining three claims — one based in the 14th Amendment and two based on alleged conspiracies to interfere with his civil rights and injure him professionally — Moon found Bhattacharya’s arguments to be unpersuasive.

Bhattacharya’s due process claim faces an uphill climb because the allegations in the amended complaint demonstrate that the decision to suspend Bhattacharya from the medical school was an academic judgment, not a disciplinary one, Moon wrote.

“The [committee] members who suspended Bhattacharya from the medical program were evaluating whether Bhattacharya met the professionalism standards set by the institution,” he wrote. “Professionalism is a core competency of the degree program at UVa Medical School, evaluated by faculty along with any other competency required to obtain a medical degree. And evaluating professionalism is a subjective inquiry best suited for the judgment of medical educators, not the Court.”

Accordingly, Bhattacharya was given more due process than the Constitution required, Moon wrote.

In dismissing Bhattacharya’s claim of a conspiracy to interfere with his civil rights, Moon wrote that the plaintiff “has expressly acknowledged that the bias against him was not motivated by any discriminatory animus toward his race or national origin,” but instead based on his “ideological views.”

However, this is not the type of class-based discriminatory animus that is cognizable under the code section alleged, Moon wrote, dismissing the claim.

The remaining conspiracy charge was dismissed because Bhattacharya did not raise anything more than a harm to his interest in pursuing employment, which Moon wrote does not raise a right to relief under the statute.

UVa has taken issue with several of Bhattacharya's claims, which are outlined in a response filed on April 14. 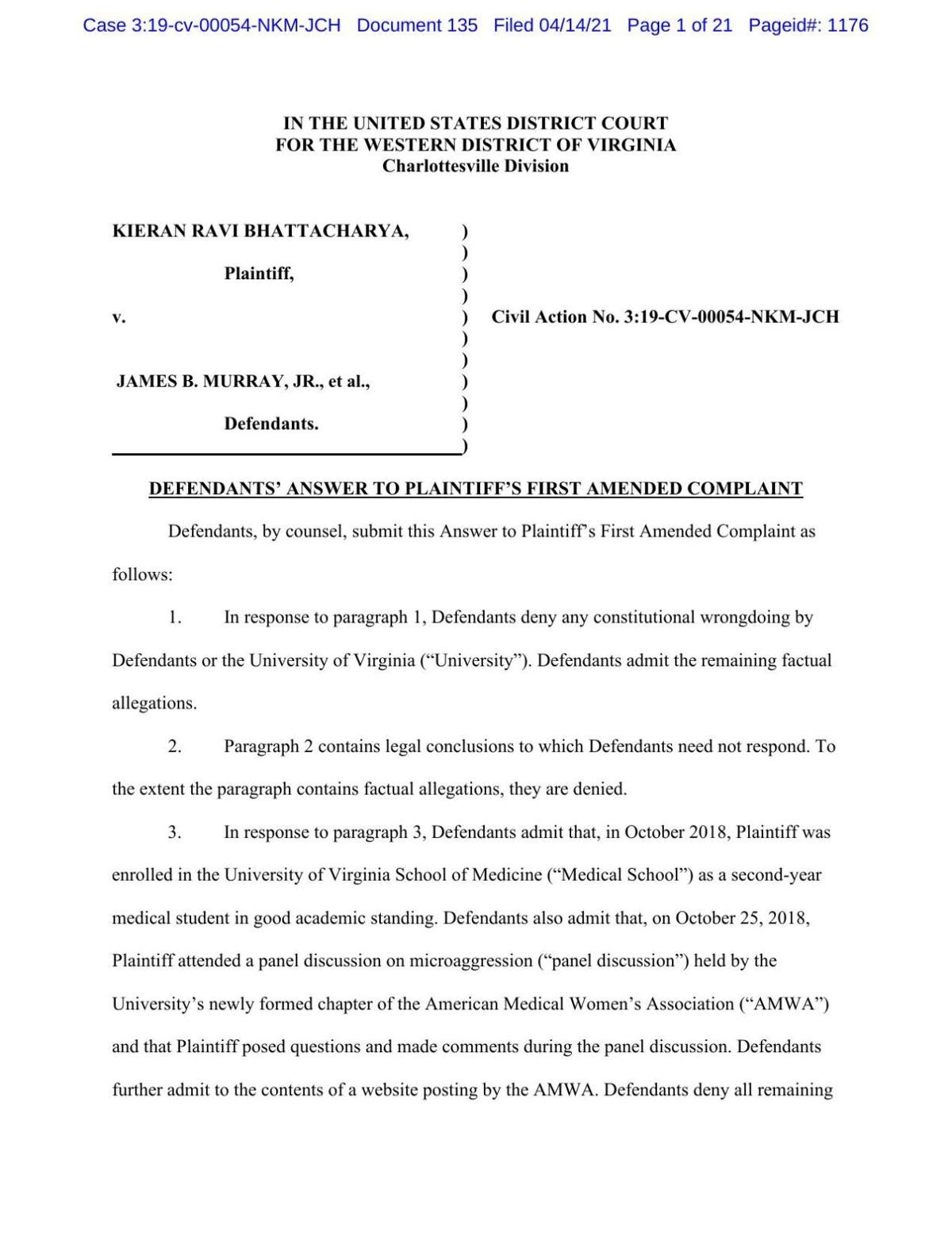 "As the University’s filing in answer to the plaintiff’s claim in this case makes clear, the student in question was dismissed from the School of Medicine after a series of incidents and repeated instances of erratic behavior that raised security concerns as well as questions about his professionalism and fitness to practice medicine," Coy said. "In response to these incidents, the University took action to protect the safety of other students and our community. Claims that he was dismissed because he exercised his First Amendment rights are baseless, as the facts will show."

A telephonic hearing for the case is currently set for May 6 and a four-day trial is scheduled to begin Jan. 4.