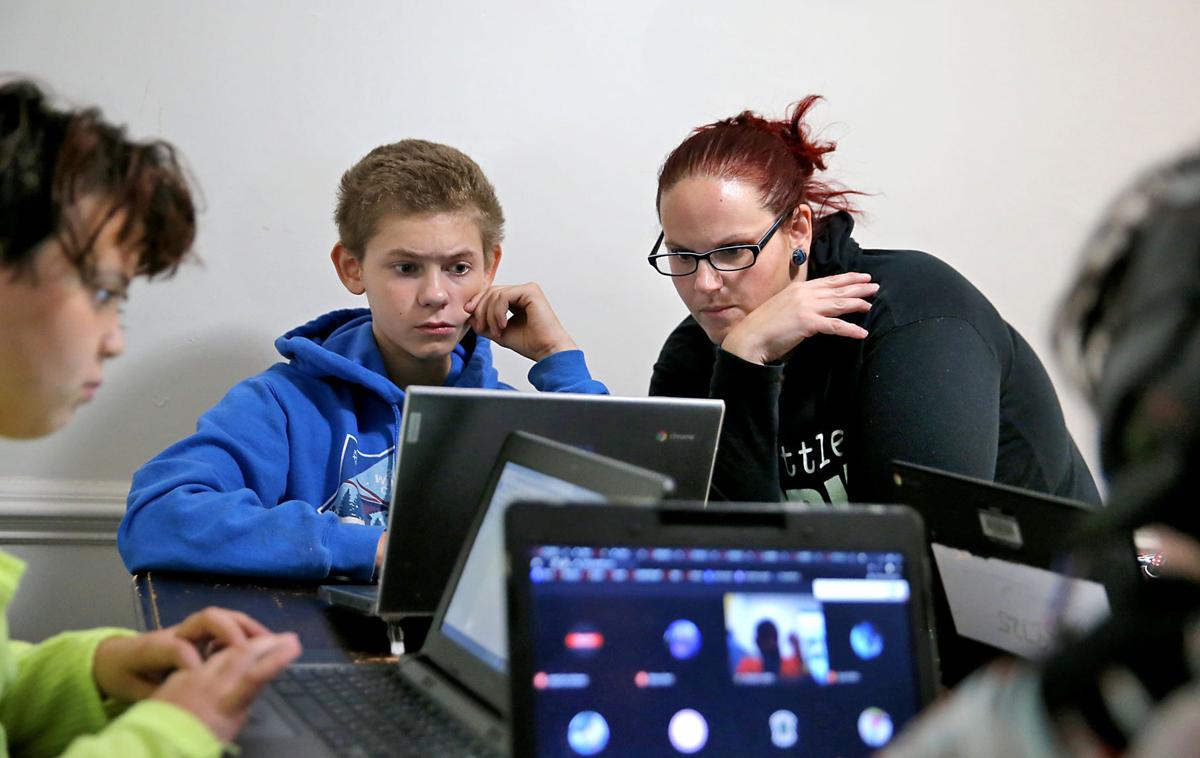 Justice Calix (left), 9, and Trace Bell, 12 — two of the children of Elizabeth Schill (right) — were among those in Chesterfield County experiencing connection issues on the first day of school. 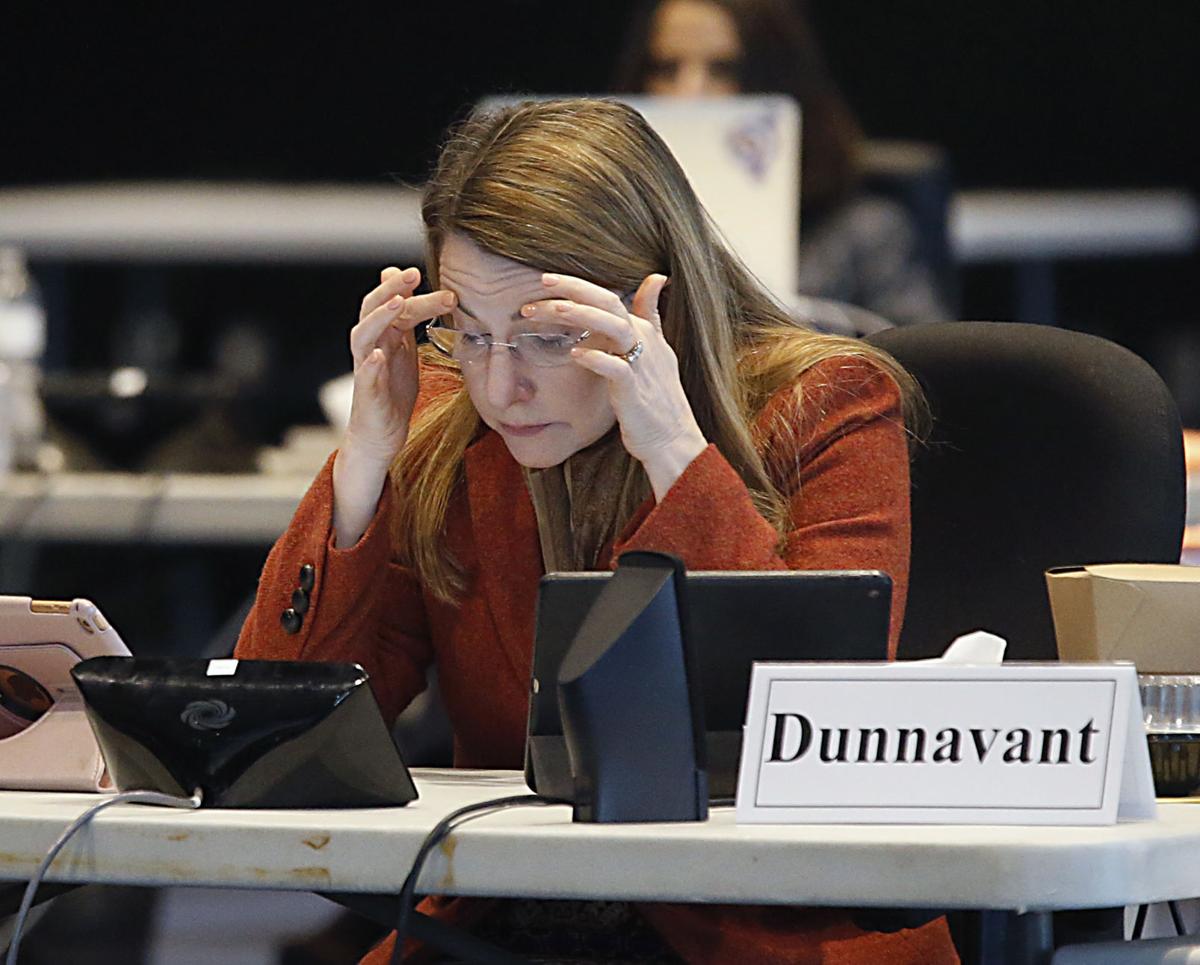 Sen. Siobhan Dunnavant, R-Henrico, concentrates as she reads legislation at her desk during the floor session of the Virginia Senate inside the Science Museum of Virginia in Richmond on Friday, Feb. 19, 2021.

State lawmakers who pressed Gov. Ralph Northam to return children to schools amid the pandemic reached a deal Monday to mandate in-person learning in Virginia.

At issue was achieving consensus about what “in-person” really meant, a term the bill’s sponsor, Sen. Siobhan Dunnavant, R-Henrico, feared some schools might attempt to work around. The bill basically mandates that schools offer in-person instruction five days a week while adhering to the Center for Disease Control and Prevention’s mitigation strategies.

The House Education Committee approved a draft of SB 1303 with a tighter definition of “in-person” as state health officials announced that five Richmond-area children have Multisystem Inflammatory Syndrome in Children, a potentially deadly syndrome linked to COVID-19. At its mildest, the symptoms can include rash, fever or gastrointestinal problems. At its worst, it can constrict the heart from pumping enough blood.

Dunnavant acknowledged the condition was a potentially “serious consequence” of COVID-19 but did not change her stance, citing research on congregate settings that she said, with mitigation, don’t show a significant spread, especially with young children.

“I think it’s really where we are — is that the preponderance of this science is so overwhelming that thinking people can’t disagree with the assertion that schools have to open,” said Dunnavant, a physician, in an interview. She first introduced the intention alongside Sens. Joe Morrissey, D-Richmond, and Chap Petersen, D-Fairfax, signaling bipartisan support.

The legislation must pass the House of Delegates before heading to Northam’s desk. If signed into law, it would take effect July 1.

The debate on whether schools should reopen for in-person learning comes as school divisions are working to get teachers vaccinated and officials face tough choices about how many children to welcome back, and how.

Some opponents of the measure — including Tazewell County School Board member David Woodard — voiced concerns about the state telling local school divisions what to do.

“The constitution of Virginia gives control over local schools to local school boards,” he said to the committee. “One-size-fits-all legislation and rules don’t necessarily work all the time, and this is one place where it will not work. What works in Northern Virginia doesn’t work in Southwest. What works in Southwest doesn’t work in Hampton Roads. ... It’s in the constitution for a reason.”

“I think what we’ve seen is that the state can be effective in providing a baseline here to make sure that we’re doing it well, and I think that’s appropriate in this moment,” he said.

The change Dunnavant offered Monday defines in-person learning as “any form of instructional interaction between teachers and students that occurs in person and in real time.” It also asserts that teachers simply proctoring students while they do virtual instruction in school buildings won’t count. The bill mandates that school boards offer the minimum instructional hours required by the state, a striking change from a substitute proposed earlier by VanValkenburg.

VanValkenburg’s legislation allowed for hybrid instruction, where students alternate between virtual and in-person learning. VanValkenburg supported the change and asked the committee to reject the substitute he drafted alongside the Northam administration.

A Northam spokesperson said the governor supported the legislature’s efforts to address concerns.

“The Governor appreciates these efforts to ensure school re-opening is consistent with health guidelines, respects the constitutional authority of school divisions, and prioritizes the safety of students, teachers, and staff,” said Alena Yarmosky.

The substitute does allow for schools to close if transmission risk becomes high, as defined in Virginia Department of Education guidance. Under most circumstances, school systems would be required to remain open if risk is not considered high. The bill’s sunset would be in 2022.

Some Republicans demanded that the legislation take effect immediately. Dunnavant included that language when she first introduced the bill, but removed it after debate in the Senate.

“Why not legislation to push this forward ASAP? Our kids are suffering; we know it,” said Del. John Avoli, R-Staunton. “As a former educator, the consequences that we’re dealing with right now are astronomical, and if we pass this legislation effective July 1, why not now?”

Del. Glenn Davis, R-Virginia Beach, who is running for lieutenant governor, motioned to amend the bill to include an emergency clause. VanValkenburg objected, saying it might cost school systems flexibility. The motion failed, by a vote of 13-9.

Gov. Ralph Northam announced Wednesday the loosening of some public COVID-19 restrictions, including the lifting of a stay-at-home curfew and an expansion of alcohol sales.

Lawyers who sued Virginia Tech on behalf of former cadets blasted the university on Sunday, alleging that its statement about the cases violated the confidentiality provisions of the settlements.

2 hikers rescued after falls along the icy Appalachian Trail

Representatives of Gov. Ralph Northam and Attorney General Mark Herring backed a bill to strengthen Virginia’s laws against sexual harassment and workplace harassment. But a Democratic senator joined Republicans on a committee Monday to stop the proposal from moving forward this year.

A body found in the Roanoke River near Niagara Dam last month has been identified as that of a man who was seen swept away by high waters weeks earlier, according to police.

One option is to use a crane to remove the protesters, but no direct action had been taken by Friday.

Teachers, state employees and state-supported local employees would receive raises of 5% in the next fiscal year, with additional money for state police salaries, under a budget agreement House and Senate leaders reached late Wednesday night.

Virginia Gov. Ralph Northam along with health and public safety officials gave an update on the state's fight against COVID-19.

Meal deliveries, spreadsheets and 'all hands on deck:' Inside quarantine at VMI

Like other schools, VMI experienced a spike in COVID-19 cases this month. Staff say initial issues have now been addressed, and the number of active cases has started to decline.

Justice Calix (left), 9, and Trace Bell, 12 — two of the children of Elizabeth Schill (right) — were among those in Chesterfield County experiencing connection issues on the first day of school.

Sen. Siobhan Dunnavant, R-Henrico, concentrates as she reads legislation at her desk during the floor session of the Virginia Senate inside the Science Museum of Virginia in Richmond on Friday, Feb. 19, 2021.