Statue removals bring joy to many, though more work needs to be done, they say
0 comments
Share this
{{featured_button_text}}
1 of 3 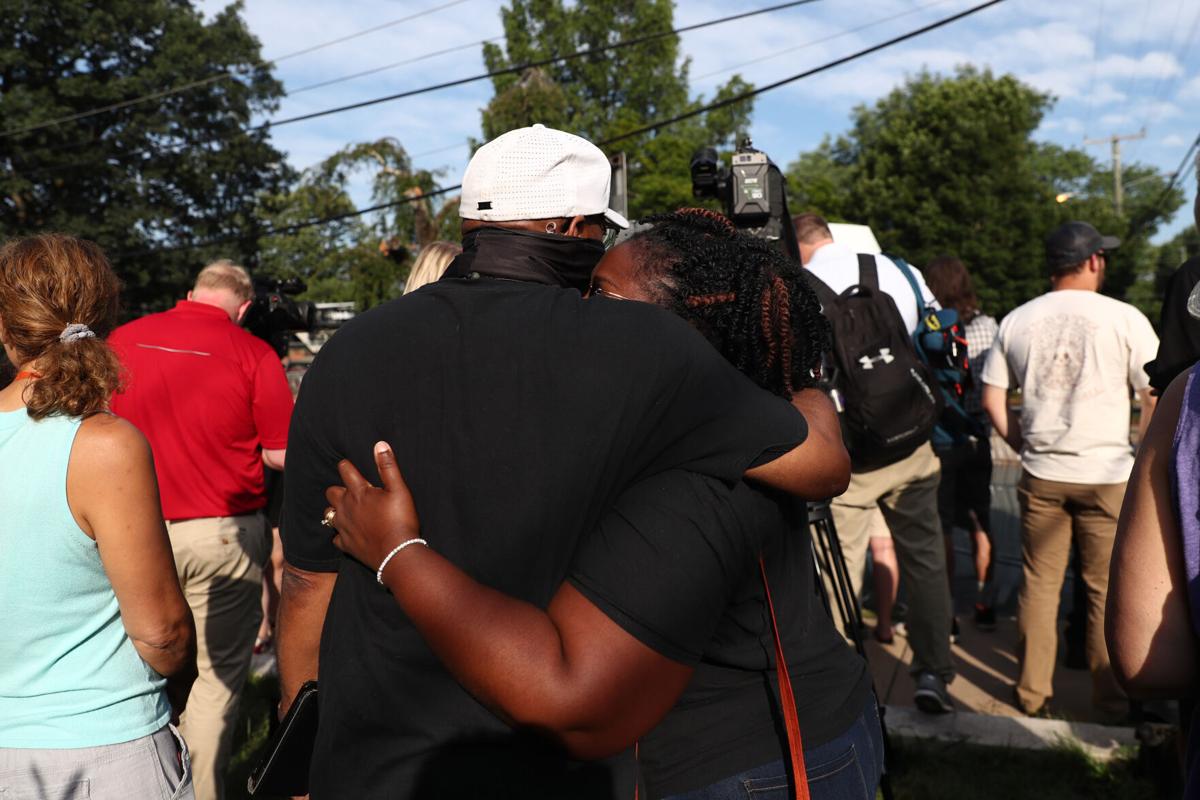 Local activists Don Gathers and wife DeTeasa Gathers hug as the Robert E. Lee statue is removed from its pedestal in Market Street Park on Saturday. Don Gathers served on a Charlottesville Blue Ribbon Commission tasked with making recommendations about the Lee statue, as well as the statue of Thomas “Stonewall” Jackson. 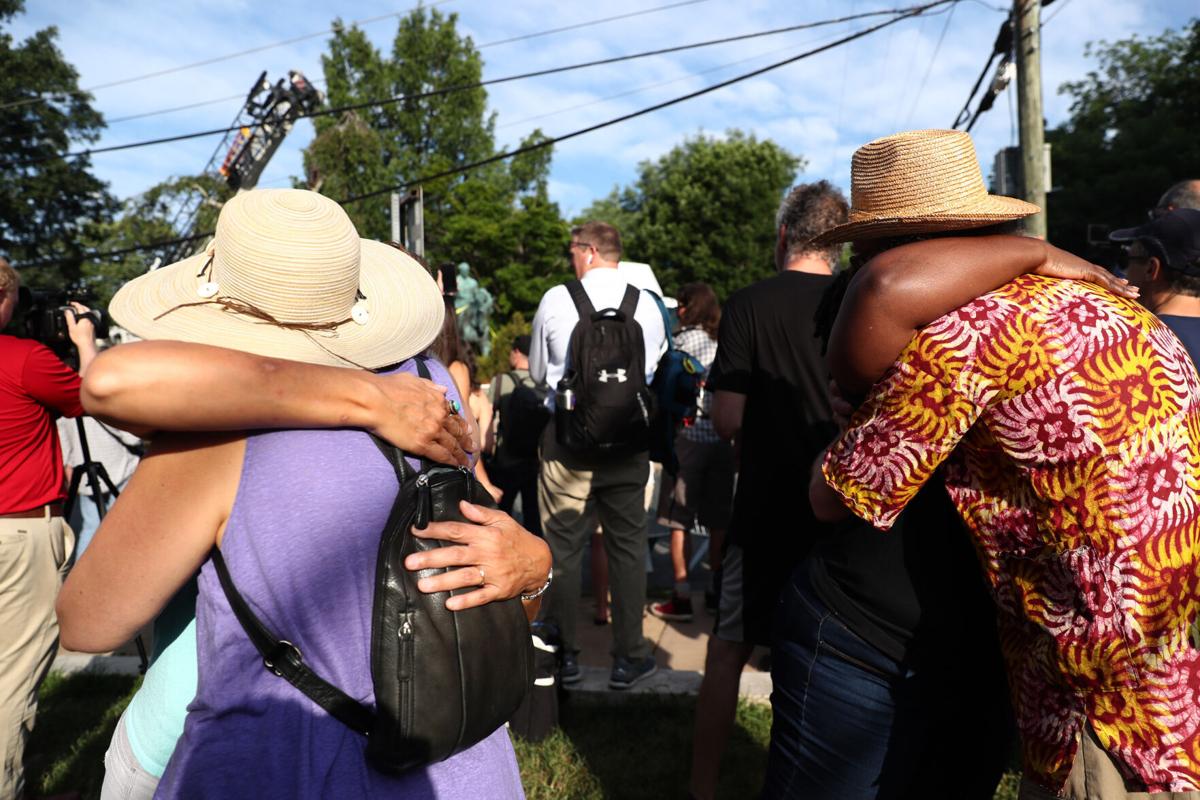 People gather and embrace each other as Robert E. Lee is removed from its pedestal July 10, 2021 in Market Street Park in Charlottesville. 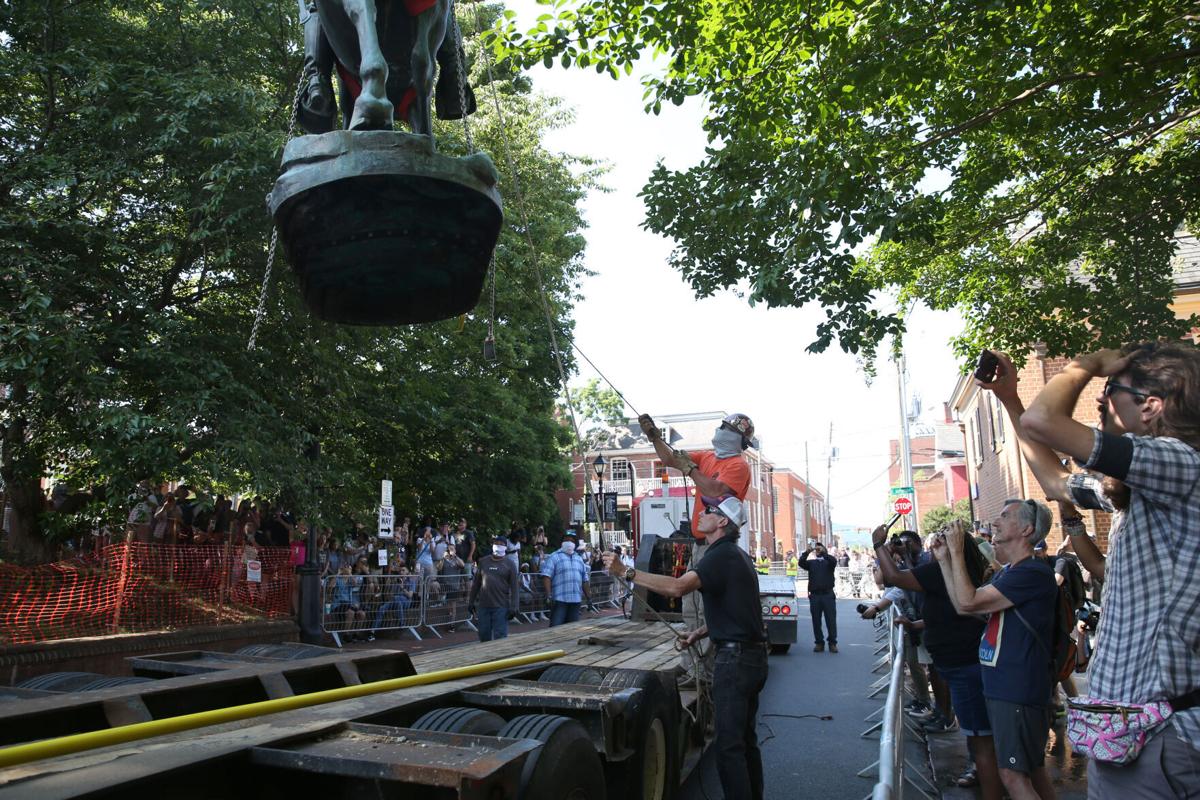 Stonewall Jackson is removed from its pedestal and loaded onto a flatbed July 10, 2021 in Market Street Park in Charlottesville, Virginia.

CHARLOTTESVILLE — Don Gathers, a local community activist, has prayed for the removal of Charlottesville’s Confederate statues but didn’t think he would live to see the day.

“I don’t know if I’ve ever seen anything more beautiful,” he said Saturday of the empty pedestal that used to hold up the statue of Robert E. Lee. “It brings things back into perspective.”

For Gathers, who was emotional after seeing the bronze statue plucked off the pedestal in Market Street Park, the work of local organizers who have pushed for the statue’s removal was on his mind.

“All the sacrifices that people have made all the work that folks who put into it,” he said. “This is, no pun intended, a monumental moment.”

Gathers co-chaired the city’s Blue Ribbon Commission on Race, Memorials and Public Spaces in 2016 that was tasked, in part, to make a recommendation about the statues.

For years, community activists, organizers and city councilors have wanted to see the statue of Lee go, along with the statue of fellow Confederate Gen. Thomas “Stonewall” Jackson, both of which were erected in the 1920s during the Jim Crow era and paid for by philanthropist Paul Goodloe McIntire. By the end of Saturday, both statues were removed and taken to a city facility off Avon Street Extended.

Activists have said the statues were a symbol of white supremacy. In 2016, Zyahna Bryant, then a student at Charlottesville High School, started a petition seeking removal of the Lee statue, kickstarting the most recent and ultimately successful effort.

As the crane moved onto Market Street Park to carry the statue away, Bryant said the removal was “well overdue.”

“It should’ve happened long ago,” she told a small crowd early Saturday morning.

Some who have called for the statues’ removal over the years have received death threats.

The City Council voted in 2017 to remove the statues, but the city had to wait for the conclusion of a long-running lawsuit and change in state law to finally act on that decision.

Bryant, Gathers and others said that removing the Confederate statues is not the end of their work to make Charlottesville a better place for communities of color, one that rejects white supremacy and values Black lives.

“We are standing in a park where the city is still refusing to address systemic issues,” Bryant said. “... The work of removing the statues is only the tip of the iceberg. There’s so much work left to do to address affordable housing, to address policing [and] to address the wealth gap.”

Gathers said removing the statues is another step on the ladder toward progress and reveals that there’s more work to do.

“For so long, it seems like that statue, in particular, has dominated the landscape of the city, and, in essence, the Confederacy continued to look down on us,” he said. “As of now, that no longer is the case. This is another war that the Confederates have lost. It’s just a huge day for our community and really for the nation as a whole. It really means a lot.”

After the Lee statue was lifted off its base, the crowd gathered at the northeast corner of the park to watch it leave for good aboard a flatbed truck. Community members, including those who showed up at the 2017 Unite the Rally as counter-protesters, embraced and took in the moment before walking down Jefferson Street to watch the Jackson statue removed.

Gathers shared a hug with his wife, DeTeasa Gathers, who grew up in the area. Later, DeTeasa Gathers sat on steps across from the Jackson statue, reflecting on the moment and thinking of the Black community in Charlottesville and her grandparents who saw the statues go up.

“I’m not sure of what’s to come, but for right now, we just need to let it sit,” DeTeasa Gathers said. “We need to reflect. We need to learn our history to understand what happened and why these things were such an issue.”

She said the history of the statues needs to be taught in schools. Growing up, she didn’t know who rode atop the horse sculpture.

“We knew it was a horse we didn’t know,” she said. “Later, we learned that it’s a Confederate monument. … I learned my history as an adult.”

Today, she shares everything she can with her 11-year-old granddaughter.

“She’s going to get an earful about it today,” she said.

Gordon Jones, a Black man who has lived in Charlottesville since he was born in 1949, never thought the statues would leave the city parks, so he wanted to be downtown to witness the moment.

“I thought the people that have been trying to keep the statue up would fight through, and it would stay up,” Jones said after Jackson and his horse were lifted off the base. “I lost confidence that it will be taken down.”

He said the removal was encouraging, especially how the community came together to do the right thing.

“The right thing to do was to get those things down because the reason they were up was for bad intentions,” he said. “… When you are trying to get by and get to the next level, and when you get something like that, reminding you — the statues, the Confederate flag — it just pushes up back instead of going forward.”

Over the years, some community members have argued that the statues should stay because they are a war memorial and a symbol of the nation’s history. The Virginia Flaggers, a group that sought to prevent the statues’ removal, thanked those who fought to keep them standing in a social media post Friday and criticized the decision.

At the parks on Saturday, there was no public opposition.

Jalane Schmidt, a local activist and University of Virginia professor, said the forces that kept the statues standing for decades are still at work.

“Those values that kept it there are still here they’re still operative,” she said after the Jackson statue departed Court Square. “So we’ve got a lot of work to do. We can’t just pat ourselves on the back and say, ‘Oh good, we did it we undid racism. There’s a lot of work to do, and this is just a more visible symbol of it, but the institutional systemic nature with the zoning codes” goes on.

That’s why she’s going to continue to share the history of the statues. Schmidt and Andrea Douglas, executive director of the Jefferson School African American Heritage, have led walking tours of the Confederate monuments to explain the context in which they were first erected.

She’s working on a short documentary about the statues’ history, as well as a book.

“We have to continue to remember that context and values that put them there and kept them there,” Schmidt said.

Rains and the emptying of a dam cause flooding in Thailand

Colin Powell, former general and secretary of state, dead at 84

Colin Powell, former general and secretary of state, dead at 84

LEXINGTON — A drunk driver was going 152 mph (245 kph) when he was pulled over in Rockbridge County over the weekend, Virginia State Police said.

A Stafford County couple in their 40s contracted the virus and died within about two weeks of each other, leaving behind five children and one grandson.

Virginia's COVID cases have declined for a month straight — again. But numbers are twice as high as last year.

The coronavirus in Virginia is retreating once again after a four-month surge that reached a single-day high of nearly 4,500 new infections last month.

"The police department cannot speak on the motive for this homicide, as the investigation is ongoing, but investigators do not believe this to be a random act nor are any further suspects being sought," authorities announced in a Monday evening news release.

Resident of Virginia assisted living facility charged in stabbing of two female residents, one of whom died

The stabbing is the second at the facility in 3 1/2 months.

Huguely, a former University of Virginia lacrosse player, was found guilty of second-degree murder in 2012 in Charlottesville Circuit Court in the killing of Yeardley Love.

Stephen Roszel was preparing for his “dream job” teaching Advanced Placement government and social studies at Monacan High School this year when the Chesterfield School Board adopted a mask mandate, a move recommended by the federal Centers for Disease Control and Prevention, then required by the state.

While some of the items were planned, many came about "due to insufficient performance from Purpose Driven Events’ vendors," county leaders wrote in a news release Tuesday.

Local activists Don Gathers and wife DeTeasa Gathers hug as the Robert E. Lee statue is removed from its pedestal in Market Street Park on Saturday. Don Gathers served on a Charlottesville Blue Ribbon Commission tasked with making recommendations about the Lee statue, as well as the statue of Thomas “Stonewall” Jackson.

People gather and embrace each other as Robert E. Lee is removed from its pedestal July 10, 2021 in Market Street Park in Charlottesville.

Stonewall Jackson is removed from its pedestal and loaded onto a flatbed July 10, 2021 in Market Street Park in Charlottesville, Virginia.