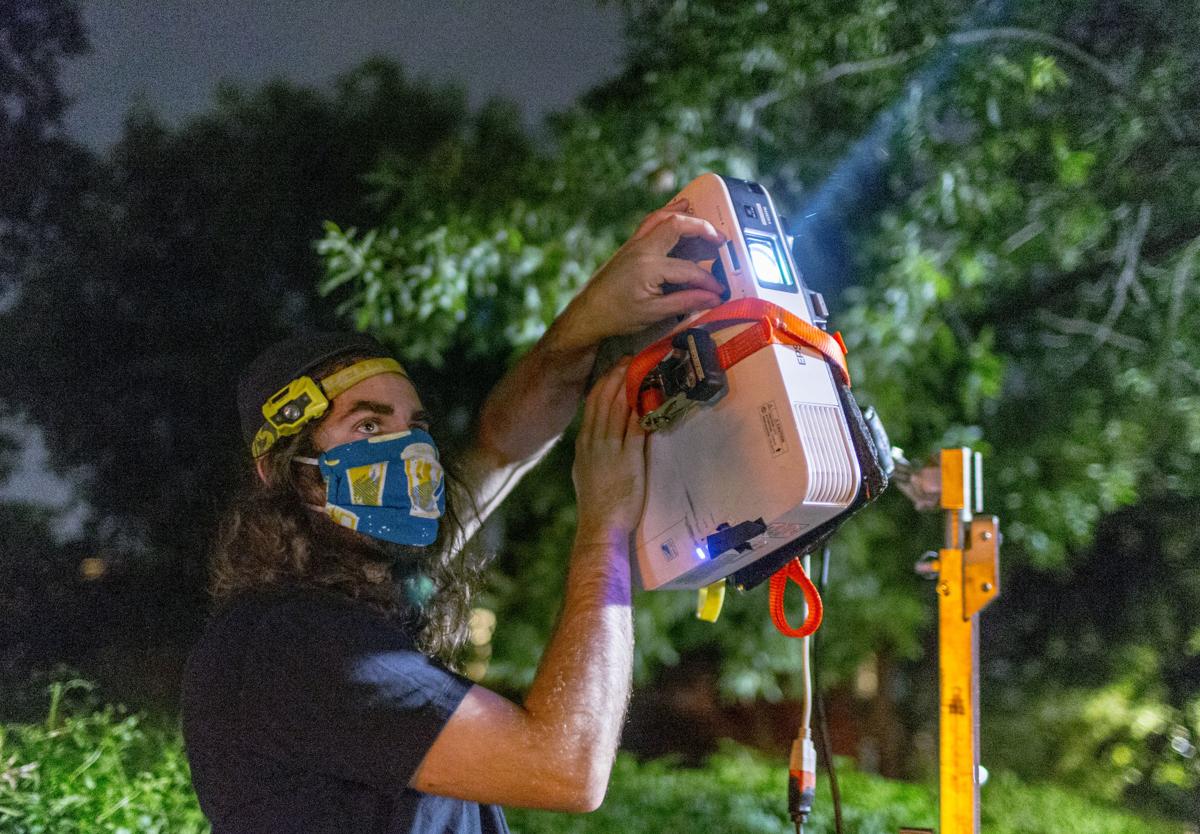 Dustin Klein, a projectionist, works with his projector to beam an image onto the Lee Monument on Friday night in Richmond on. 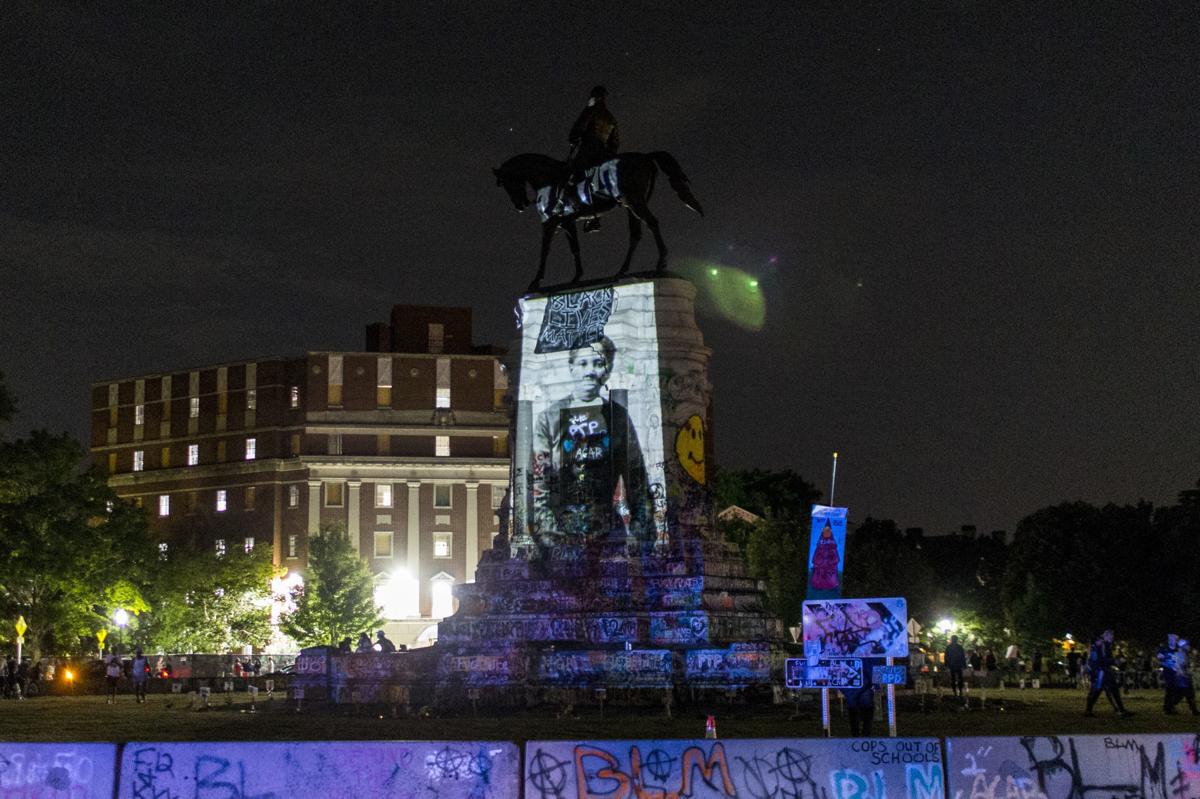 The Robert E. Lee monument is lit with the image of Harriet Tubman, American abolitionist and political activist, on Friday night in Richmond. 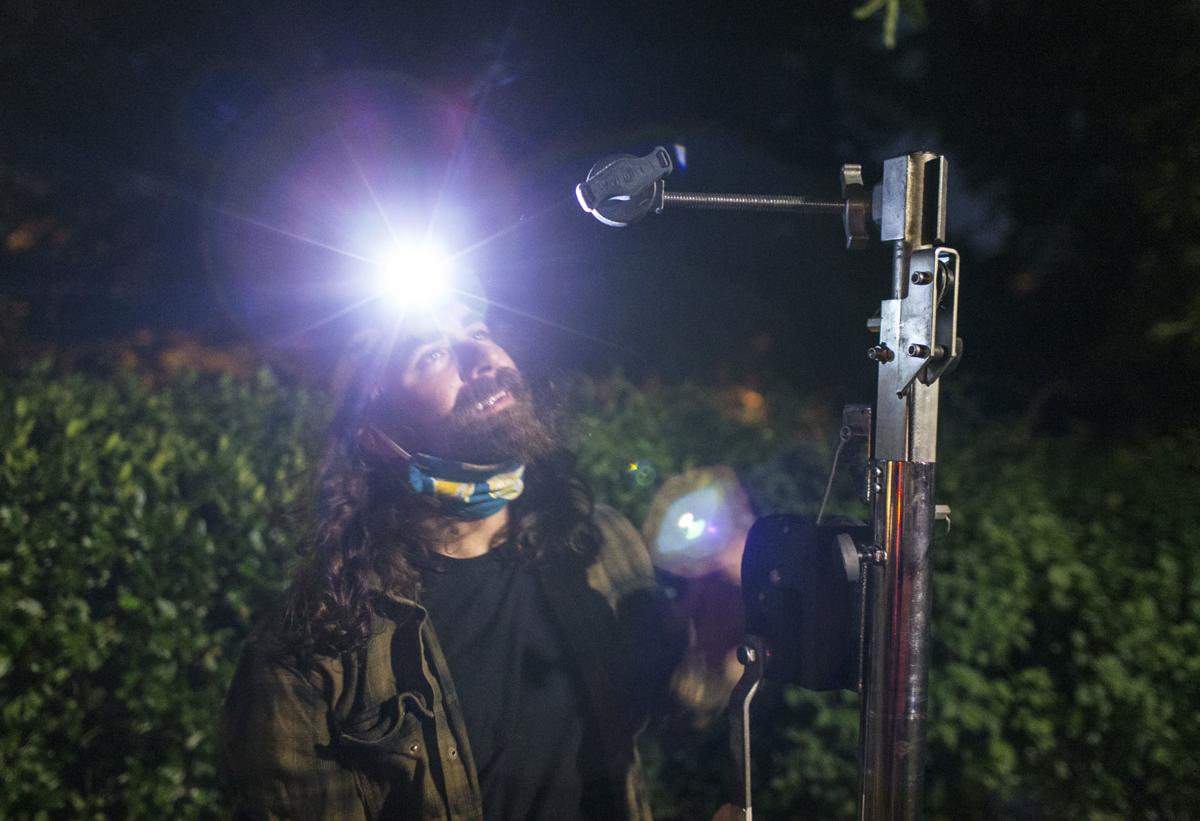 Dustin Klein (above and left), a projectionist, works with his equipment to beam an image onto the Lee Monument on Friday night in Richmond on June 26, 2020.

Aaron Parker took the final inhale of his last American Spirit cigarette and craned his neck toward the graffitied vestige of a Confederate past — a general revered in his history books as a “not-so-bad” enslaver who fought for states’ rights.

The Mechanicsville native never used to look up as he drove past, but after midnight on Saturday he felt empowered as a Black man on Monument Avenue, a thoroughfare anchored by tributes to people who fought for slavery, and lined by old-money homes.

In recent weeks, he’d seen Black Union soldiers and videos of the Rev. Martin Luther King Jr.’s “I Have a Dream” speech projected onto the silhouette of Robert E. Lee’s horse, re-animating the bronze statue unveiled in 1890 and overlaying condemnations of police violence and white supremacy that have engulfed the monument in paint this month.

This is what the monuments could be, he thought.

“Black lives haven’t mattered for as long as I’ve been alive and way past that,” said Parker, adding that he sees these images as a vehicle for systemic change and long-delayed conversations about race and oppression.

Since June 2, that’s what the monument has been after nightfall: a looping projection recounting the centuries of pain and resilience of Black lives through the figures who fought and died for justice.

The projections, which have garnered national attention, are designed by Dustin Klein and Alex Criqui, two Richmond-based artists who sought to amplify the messages of Black Lives Matter after witnessing police tear gas protesters in Richmond on May 30.

This is what they could do to fight for Black lives, they thought, a small gesture of joy and remembrance in times of mourning as the Lee monument’s immediate future is in the hands of a judge. Opponents of its removal successfully sought an injunction blocking the move.

Each night, Klein and Criqui — a longtime lighting designer and photojournalist — haul equipment onto the medians on Monument Avenue — a set-up that includes a generator, an HD projector and a laptop that adapts graphics and videos from a software to the monument’s shape.

On the night of an LGBTQ march for Black lives, the pedestal transformed into the pride flag. On June 19, as thousands congregated around the monument, the Juneteenth flag lit up the roundabout.

The black-and-white images frequently quote pioneers of the civil rights movement; the RVA bail fund number has been posted for protesters in case they’re detained; and in the nights after protesters pulled down the Jefferson Davis monument, “Don’t celebrate slave owners” wrapped its columns.

Messages have also urged protesters to call on Commonwealth’s Attorney Colette McEachin to drop the charges against protesters arrested by police.

Klein and Criqui have the idea to recontextualize all the monuments on the milelong stretch of Confederate statues using public funds, replacing the monuments left standing with images of Black civil rights leaders and Black people killed by police.

But the pain is still felt, Criqui said, especially when the young faces of Tamir Rice and Trayvon Martin flash across the monument.

“Each one of those faces is a life lost unnecessarily,” he continued. “And it’s heartbreaking.”

The Lee monument grounds — informally dubbed the Marcus-Davis Peters Circle — has become its own bullhorn in a movement launched by the police brutality against Black people; a symbol for how Black communities are reclaiming spaces that historically have made them feel unwelcome.

Seeing the circle transform from a Confederate monument into a community gathering space with grilling, pick-up basketball games and people checking in on one another has been the most powerful part of this process, Klein said.

“We wouldn’t be able to do what we did if it wasn’t for the people who started this movement,” Criqui added. “We’re helping in a small way to keep eyes on Richmond and keep people focused on what’s happening in our city.”

And eyes continue to gravitate toward the former capital of the Confederacy, as police launch tear gas and protesters take action to tumble the city’s monuments down themselves.

On Friday night, violence gripped the grounds around the Lee monument once again as a projection of Harriet Tubman stood firm atop the graffitied memorial, a backdrop to fireworks, deafening flash bangs and chemical agents.

The force unleashed by police ruptured around the abolitionist as they attempted to disperse crowds declared to be in violation of state regulations that bar assembly at the monument after sunset.

Klein and Criqui stood off to the side, the behind-the-scenes men guarding the projection that continues to provide moments of solace in times of violence. They know this isn’t about them. Their eyes squinted as they adjusted to the burning of chemicals piercing their face masks and skin.

They looked out past the armored vehicles and the more than 100 police in riot gear that surrounded the circle, many at the base of Tubman’s image that usually has the line “Slavery is the next thing to hell” written atop.

Tubman looked on, too, her eyes unwavering.

WASHINGTON (AP) — A mysterious ailment has sickened and killed thousands of songbirds in several mid-Atlantic states since late spring. While …

CHARLOTTESVILLE, Va. (AP) — A doctor at the University of Virginia has been arrested and accused of possessing child pornography, according to…

Biden stumps for McAuliffe in early test of political clout

ARLINGTON, Va. (AP) — President Joe Biden led the kind of campaign rally on Friday that was impossible last year because of the pandemic, spea…

It's a great July 4 forecast for Va. But first, we have to get through storms and downpours.

Independence Day weekend will bring a refreshing dip of cooler weather to Virginia after a spell of 90s this week — and before another resurgence of heat next week.

Biden stumps for McAuliffe in early test of political clout

ARLINGTON, Va. (AP) — President Joe Biden led the kind of campaign rally that was impossible last year because of the pandemic, speaking befor…

ELIZABETH CITY, N.C. (AP) — The bodies of two brothers from Virginia have been found after the helicopter they were traveling in disappeared o…

HENRICO, Va. (AP) — A toddler has died after being hit by a vehicle in an apartment complex parking lot, Henrico County Police said.

Dustin Klein, a projectionist, works with his projector to beam an image onto the Lee Monument on Friday night in Richmond on.

The Robert E. Lee monument is lit with the image of Harriet Tubman, American abolitionist and political activist, on Friday night in Richmond.

Dustin Klein (above and left), a projectionist, works with his equipment to beam an image onto the Lee Monument on Friday night in Richmond on June 26, 2020.