Patricia Mae Hash, 72, of Waynesboro, passed away on Thursday, September 3, 2020, at Accordius of Waynesboro. Mrs. Hash was born on December 28, 1947, in Wolfe, W.Va., the oldest daughter of Raymond E. and Bertha Mae (Byrd) Coffey. Pat graduated from Pocahontas High School in 1967. She went to work in the Delivery Room at Bluefield Sanitarium. On March 2, 1968, she married Donald H. Hash Jr. They relocated to Roanoke, Va., where they started raising three children, Sarah, Donnie Ray and Cathy. Pat was one of the first people to make Hardee's Biscuits. She also worked for Rose's in Waynesboro and later in the cafeteria of Waynesboro High School. She was preceded in death by her parents and brother, Raymond E. Coffey Jr. In addition to her husband, Mrs. Hash is survived by her children, Sarah E. Hash-Rodgers and husband, James, of Waynesboro, Donald Raymond Hash of Vilonia, Ark., and Cathy D. Jones and husband, Chris, of Roanoke, Va.; grandchildren, Morgan E. Rodgers, Mollie G. Rodgers, Nicole Steele, Austin Steele, McKenna E. Ricardi, Colin C. Jones, and Chase H. Jones; two sisters, Dianna Catron and husband, Kenny, of Spotsylvania, and Tammie Coffey of Henry County; brother-in-law, Scott Crews, of Callaway, Va.; and sister-in-law, Patty O' Brien of Jeffersonville, Ind. Due to current Covid-19 restrictions, there will be no services. The family would like to extend a sincere THANK YOU to the staff of Accordius of Waynesboro. Arrangements have entrusted to the Waynesboro Chapel of Reynolds Hamrick Funeral Homes. Relatives and friends may share condolences and memories with the family online by visiting www.reynoldshamrickfuneralhomes.com.

+1
+1
To plant a tree in memory of Patricia Hash as a living tribute, please visit Tribute Store. 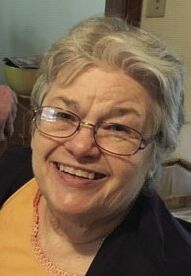