JMU blows past Morehead State for 68-10, season-opening victory
0 comments
Share this
{{featured_button_text}}
1 of 3 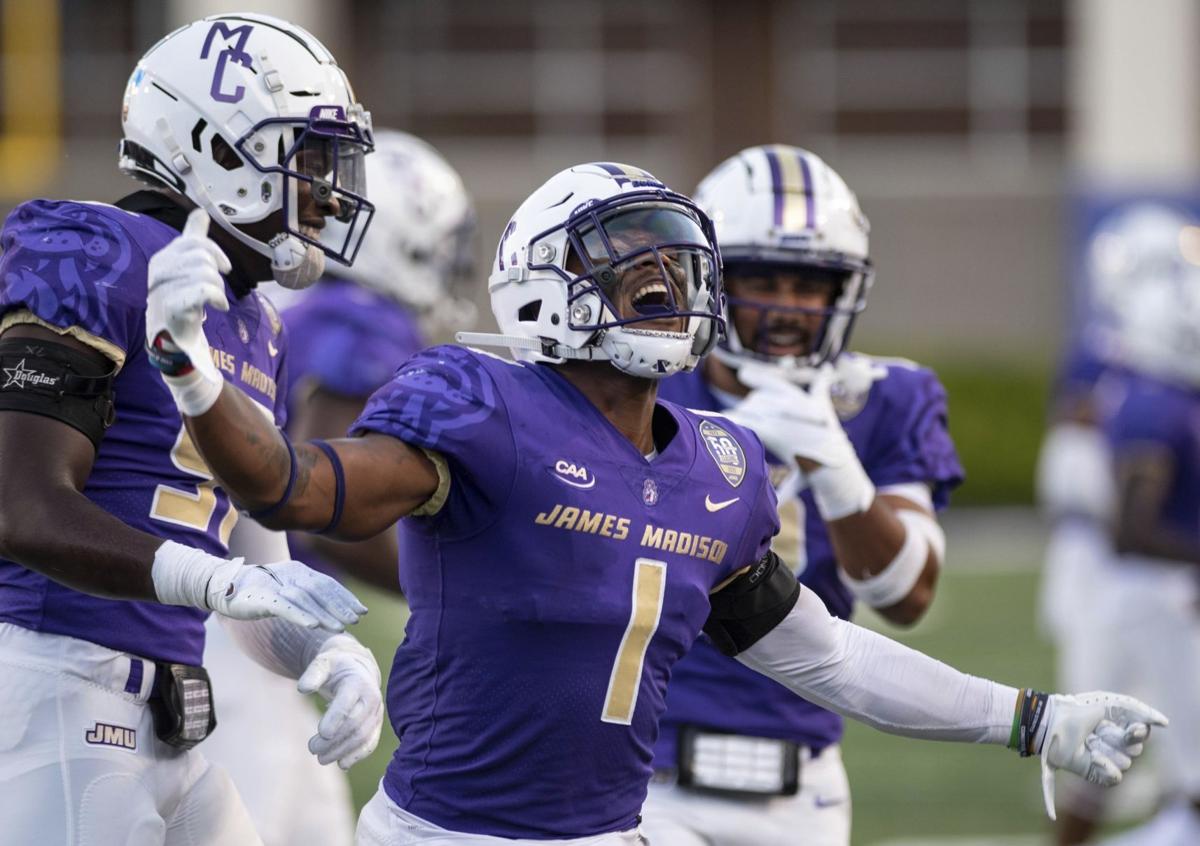 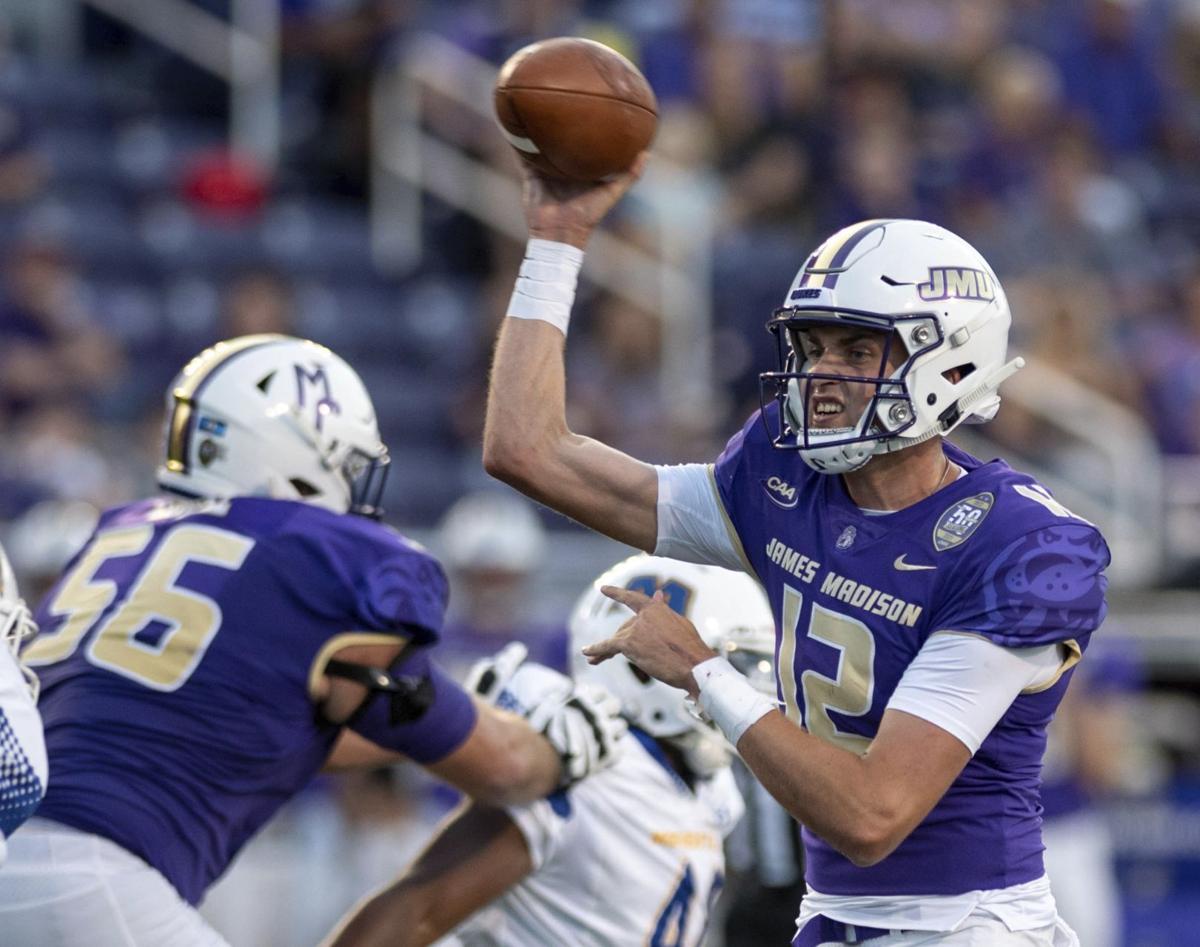 James Madison quarterback Cole Johnson throws a pass during the first half Saturday against Morehead State in Harrisonburg. 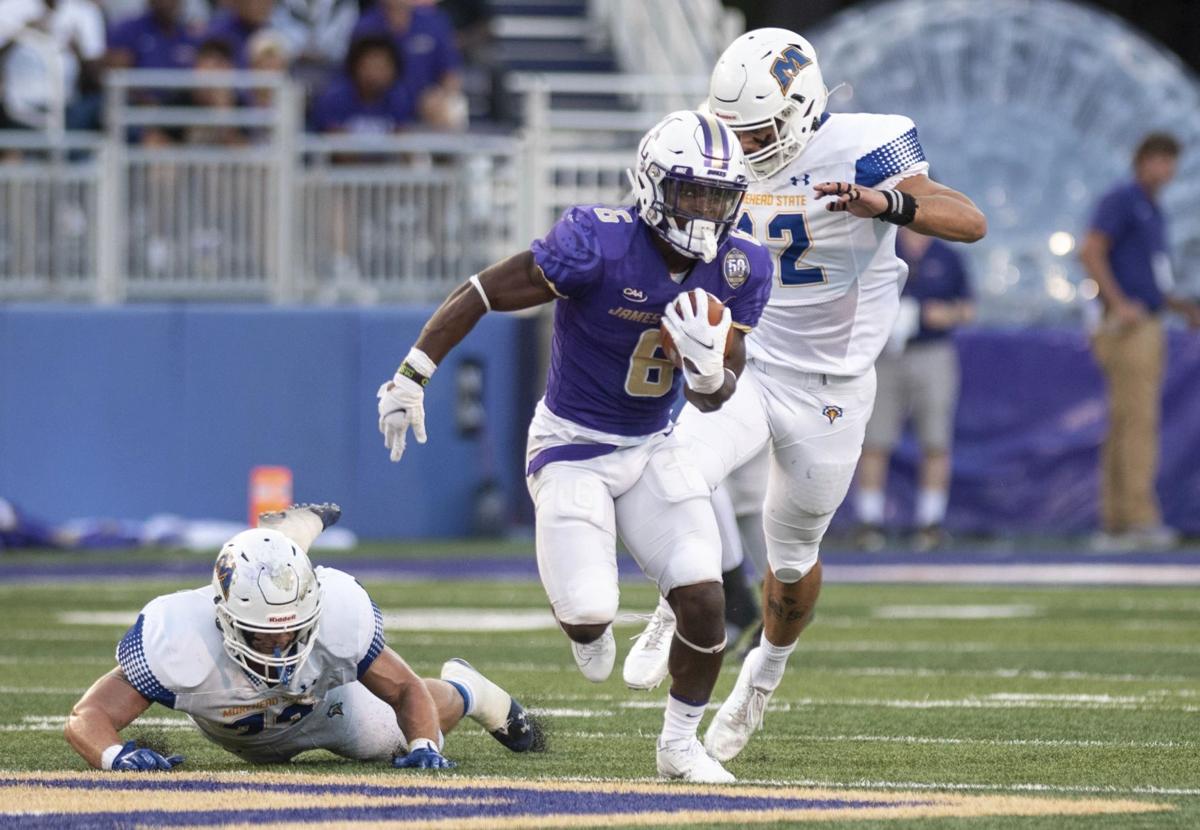 James Madison running back Kaelon Black shakes off the Morehead State defense as he charges up the field during the first half Saturday in Harrisonburg.

HARRISONBURG — The line of students waiting to get in almost told the story by itself.

At James Madison’s Bridgeforth Stadium on Saturday evening, that procession of students on the way to watch the Dukes play Morehead State stretched at least a football field in length for a time.

In what was the first full-capacity game at Bridgeforth Stadium in almost two years, a buzz was palpable in the late summer air.

And a loaded JMU team with national championship hopes delivered a 68-10 victory to open the season. The Dukes blew the game open in the second half to start the 50th season in program history in emphatic fashion.

It came in front of a crowd of 22,229 and a Marching Royal Dukes band corps that made Bridgeforth boom.

Celebrating its 50th season, JMU wore helmets that featured a throwback 1970s design on one side, with an interlocking “MC” for Madison College. The program also honored the family of Challace McMillin, and members of the inaugural 1972 team, on the field before the second quarter. McMillin was the Dukes’ first football coach, building the program over a 13-year tenure from 1972-84.

This year’s edition of the Dukes entered the season ranked second in the preseason Stats Perform Top 25, after advancing to the FCS playoff semifinals in the spring season earlier this year.

Running back Kaelon Black was the standout offensively for the Dukes early Saturday. Black got the starting nod as veteran Percy Agyei-Obese did not dress. Agyei-Obese has been working his way back from a hamstring tweak.

It was the first game action for Black, a speedy, quick-twitch back, since midway through the spring season earlier this year, when he ran for 141 yards and a touchdown at William & Mary. A health concern shut down Black’s spring season until right before the playoff semifinal, and he didn’t play again.

On Saturday, Black burst for a 10-yard game on the first offensive play of the game for the Dukes. Two plays later, wide receiver Kris Thornton streaked wide open and was hit by quarterback Cole Johnson for a 54-yard score.

Four consecutive Black runs also helped set up a 5-yard touchdown pass from Johnson to Antwane Wells Jr. (Highland Springs) early in the second quarter as JMU cashed in on an interception by safety Que Reid late in the first frame to make it 14-3.

Morehead State’s lone points of the first half came on a first-quarter, 33-yard field goal by Andrew Foster. That came at the end of a drive that featured two of JMU’s five first-half penalties, a holding call on cornerback Taurus Carroll and a pass interference flag on cornerback Jordan Swann. The Dukes were called for just one more penalty the rest of the game.

And Carroll made up for his with one of two JMU interceptions in a third quarter in which the Dukes blew things open. Cornerback Greg Ross had the other third-quarter pick, and JMU scored on each of its four third-quarter possessions to put the game out of reach.

Johnson, who exited after one fourth-quarter drive, finished 19 of 28 for 299 yards passing and five touchdowns. He tied a JMU individual single-game passing touchdown record. Running back Latrele Palmer added 98 yards on nine carries and two scores.

Backup quarterback Billy Atkins, a true freshman, connected with Solomon Vanhorse for a 5-yard fourth-quarter score to tie the JMU team record for passing touchdowns in a game at six.

Thornton finished with two touchdowns as well and 82 yards on four catches. JMU had 688 yards of total offense, and its 51 second-half points were a program record.

Left tackle Liam Fornadel, a veteran up front for JMU, exited in the first half and was spotted on crutches. He was replaced by redshirt freshman Tyler Stephens.

Defensive back Chris Chukwuneke had a team-high six tackles.

Former Highland Springs standout Mike Greene, an All-American performer on the defensive line for the Dukes, did not dress Saturday.

Next up for JMU is another home game, a Colonial Athletic Association opener, against Maine on Saturday at 4 p.m.

BRIDGEWATER — The yards are a bit tougher to come by and finding the end zone isn’t quite as easy, but former Riverheads High School star Zac …

McFarling: Time for compounded comfort to pay off for Hokies

He’s not going to like it in its totality. Justin Fuente already can sense that.

The ACC commissioner said he is "really optimistic."

For JMU fans, clash with Richmond at Robins Stadium remains a hot ticket

For JMU fans, clash with Richmond at Robins Stadium remains a hot ticket:

James Madison holds off Richmond on a rough day for the offenses.

No Power Five football team has thrown more passes so far this college season than Virginia. And that’s just fine with the players tasked with catching those throws.

The Virginia men's basketball team will have a much different look this season following the loss of its top three — and six of its top eight — scorers from a team that won the ACC regular season title.

Barber: Virginia gets its 'swag back' in blowout of Duke

James Madison quarterback Cole Johnson throws a pass during the first half Saturday against Morehead State in Harrisonburg.

James Madison running back Kaelon Black shakes off the Morehead State defense as he charges up the field during the first half Saturday in Harrisonburg.