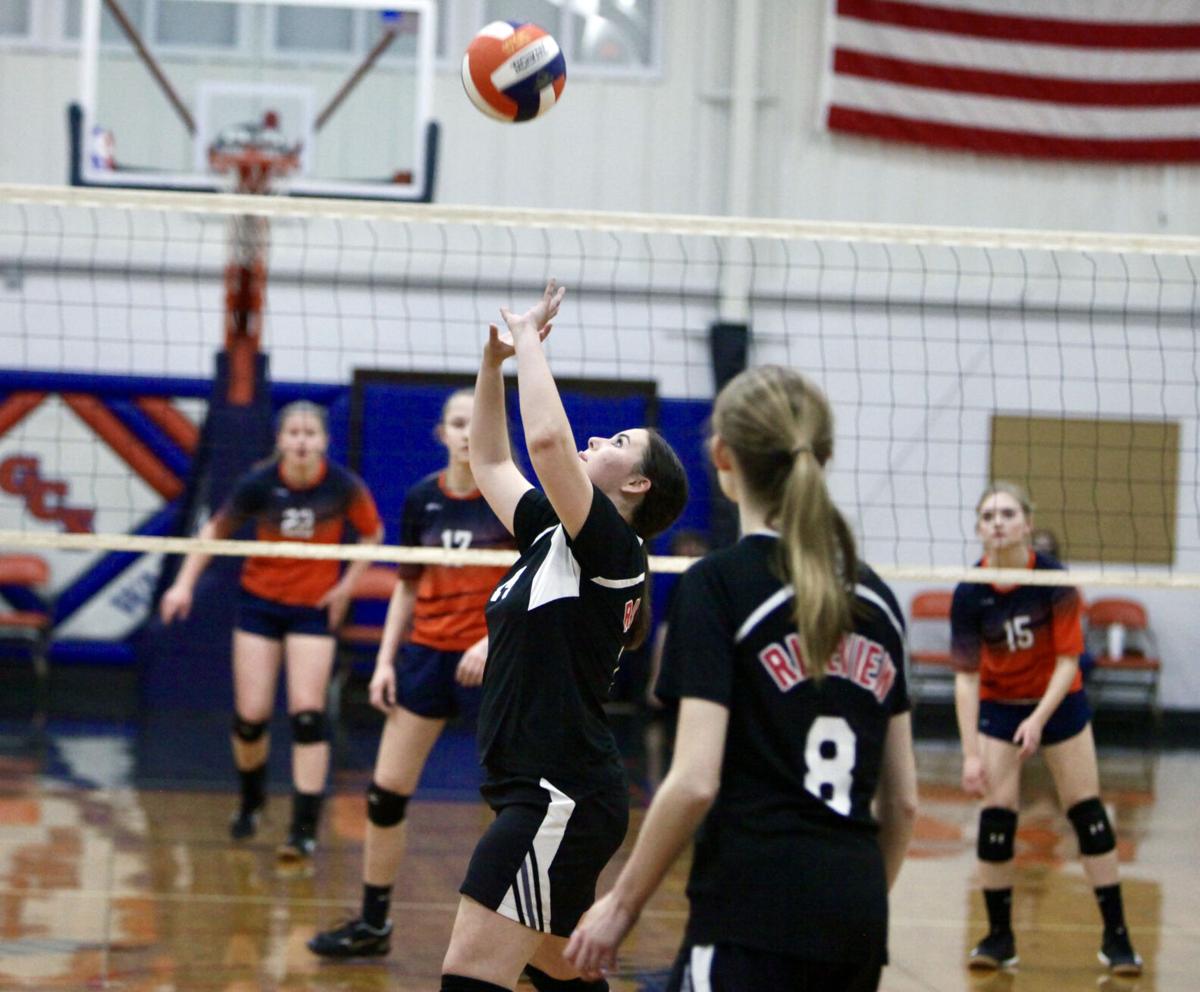 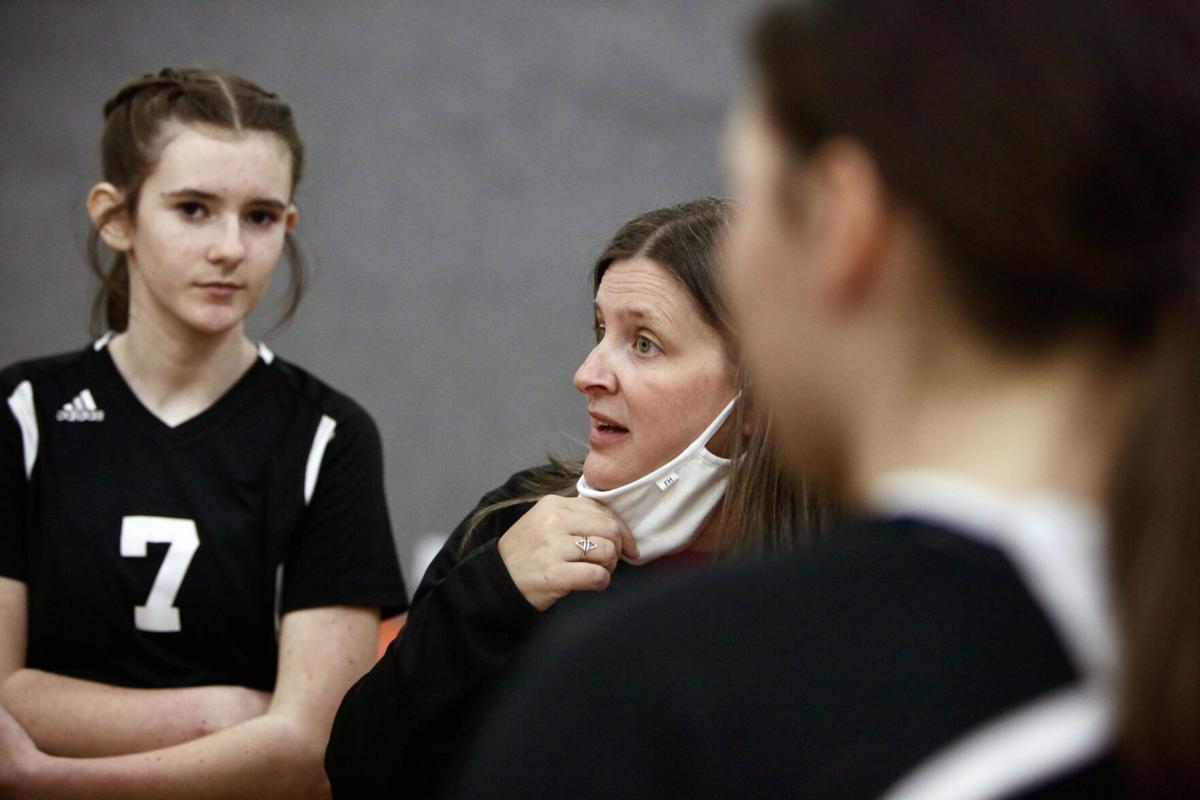 Ridgeview coach Summer Woody speaks to her players Thursday during a VACA state quarterfinal match against Grace Christian in Staunton. 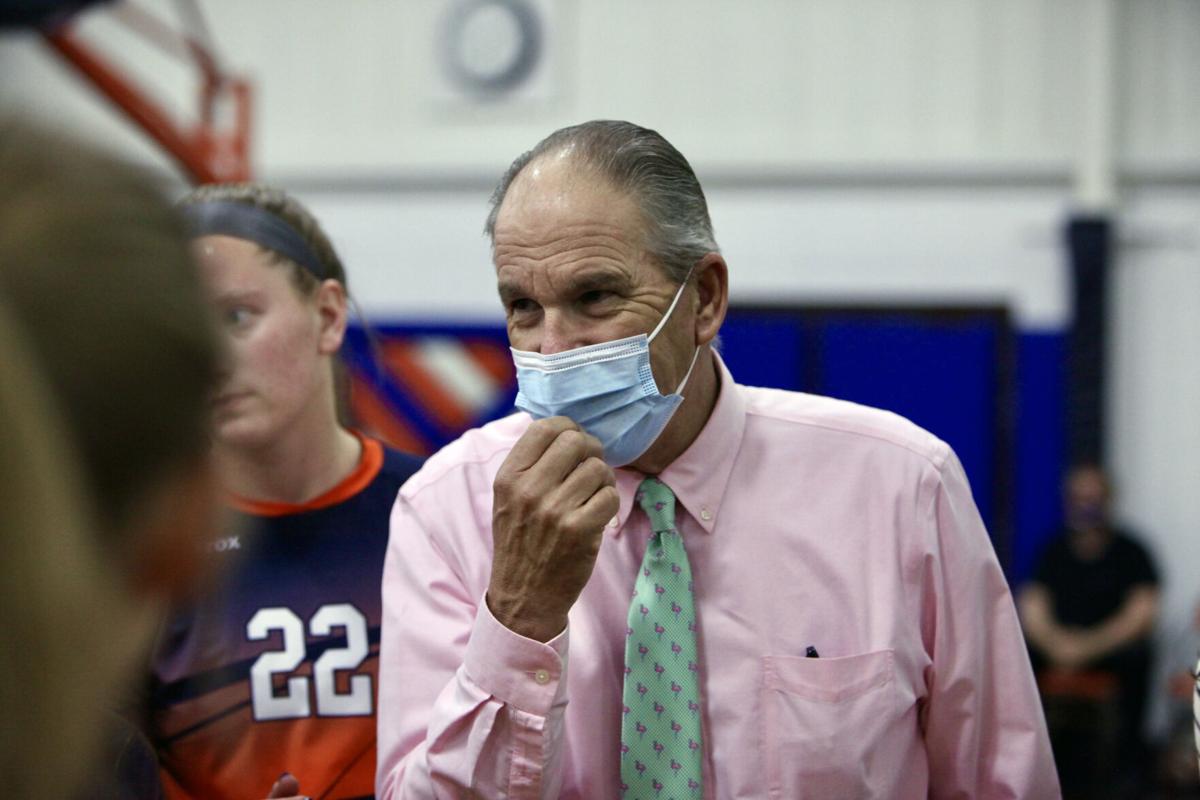 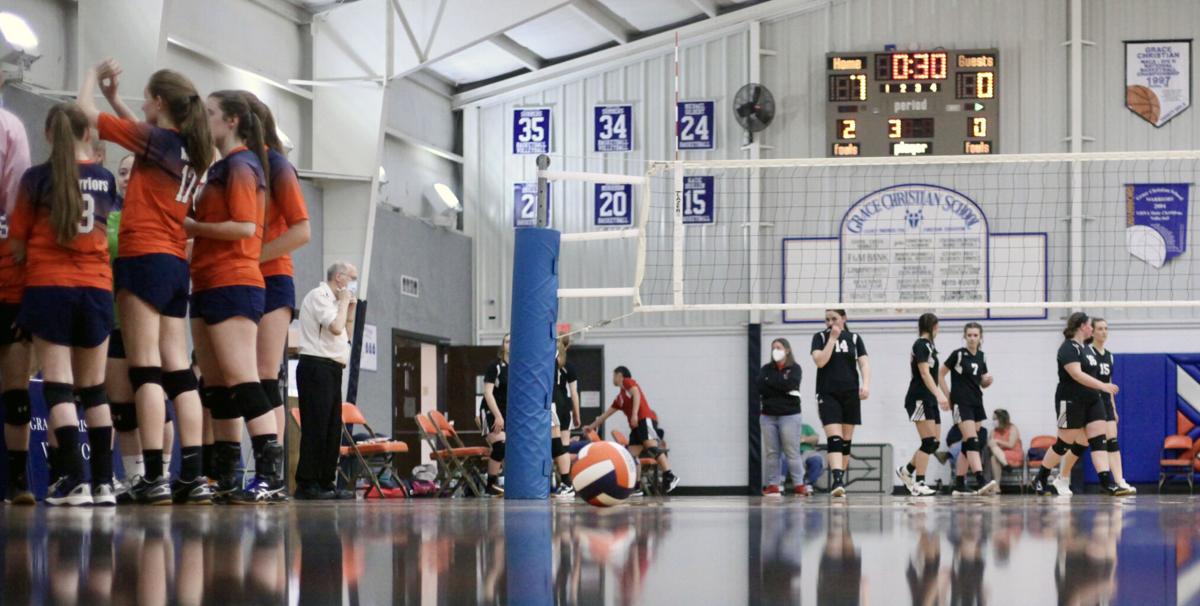 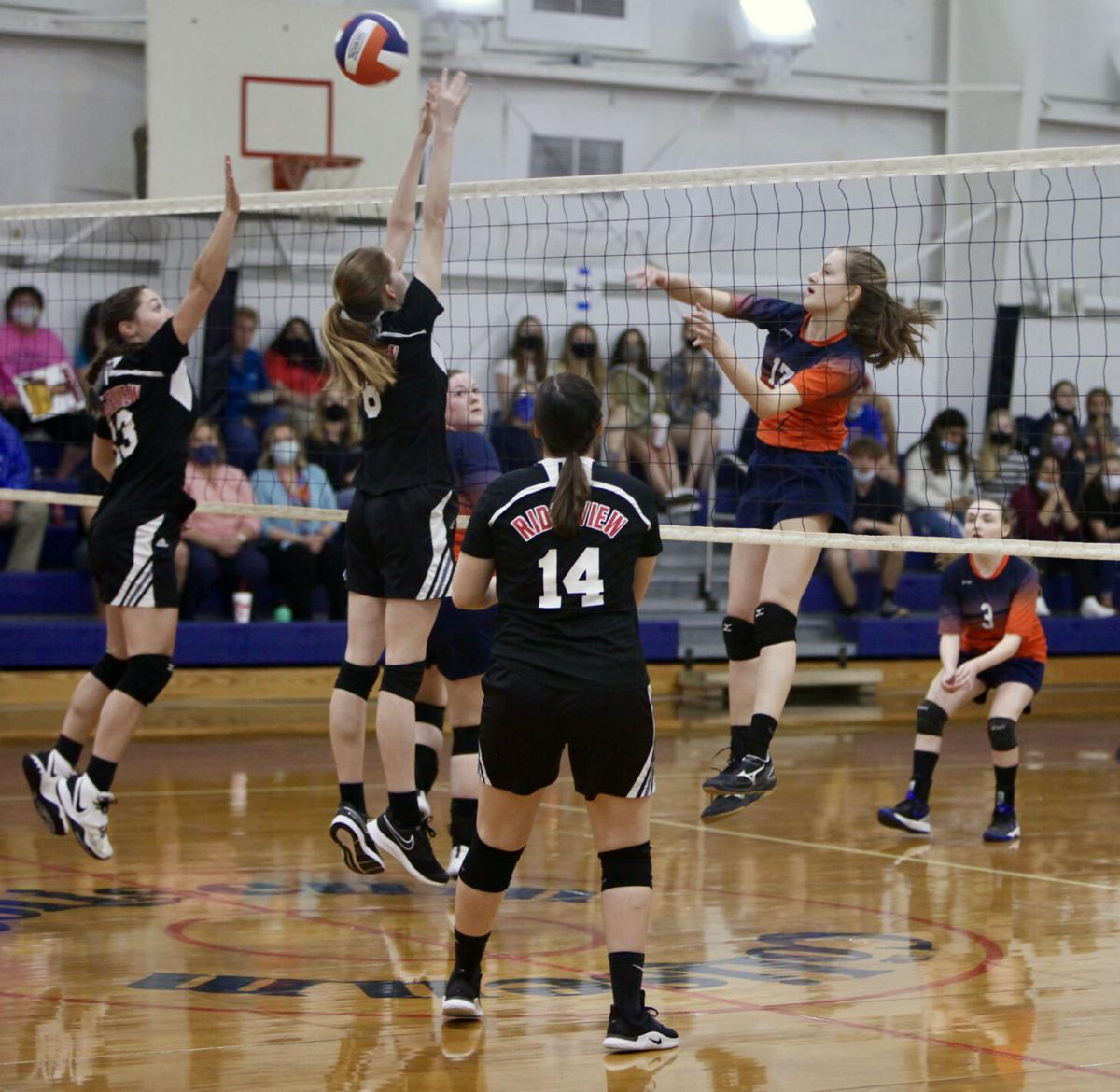 The No. 3 seeded Warriors dug out of deep holes in the first two sets to eventually sweep longtime rival No. 6 seed Ridgeview Christian 25-23, 25-20, 25-14 in VACA state quarterfinal action Thursday night.

“I’m really proud of us,” said Grace Christian setter Ashland Allred, who led the Warriors with 19 assists. “It was a little rough for the first two sets, just getting our feet under us with Easter break. We haven’t played in a game in a while. I was really proud of our efforts, and I feel like we gelled really well together and pulled it out when we needed to.”

All three of Ridgeview’s losses this year have come at the hands of Grace Christian. The state quarterfinal matchup was by far the closest of the three matches.

“I told them they were coming as the underdogs,” Ridgeview coach Summer Woody said. “I told them it was Grace’s game to lose, and our girls came out fighting hard. They played better tonight against Grace than they had all season. It’s so disappointing, especially for our two seniors (Emily Campbell and Kadri Romanin) … to not see them pull one (set) out was tough.”

An ace by Lucy Wells put Grace up 9-2 early in the first set, and it seemed that the Warriors would cruise to another victory. However, Ridgeview reeled off seven straight points in the middle of the set to tie things up at 15-15 on a Kara Hartt block.

A kill by Campbell pulled Ridgeview within one point, 24-23, but a Vivian Wirth killed sealed the first set win for Grace. The second set played out in similar fashion, with Ridgeview leading 20-17 late. The Warriors, however, closed the match up on a 8-0 run for the 25-20 victory.

The second set was sealed by an ace by Wirth.

“We got caught in a style of ball that was not our style,” Grace Christian coach Gary Hockman said. “We had a hard time adjusting to it.”

Grace picked up exactly where it had left off in the second, holding commanding leads of 7-0 and 10-1 in the clinching set, ultimately winning by a comfortable 11-point margin.

“We served well and had a lot of aces,” Hockman said.

Wells led the Warriors with 10 kills.

With the VACA quarterfinal victory, Grace advances to the state semifinals at Timberlake Christian Academy on Saturday.

“It’s incredible,” Allred said. “Last year, we were in states as well, and we didn’t have the greatest outcome. I’m glad to be able to go again and hopefully finish out strong.”

Which men's college basketball programs should we keep an eye out for next season?

Which men's college basketball programs should we keep an eye out for next season?

Lassiter: Cougars cheerleading squad still have reason to be proud

Chris Lassiter reminds the Stuarts Draft cheerleaders that once the tears dry up, it’s time to celebrate.

Lassiter: Although the loss hurts, the way it ended was most painful

In a perfect world, Friday night’s game would have ended with Michael Smith in a victory formation.

Riverheads’ senior running back Zac Smiley shattered the school career rushing record on his first carry, which also added to his career touchdown record, and the Gladiators barely broke a good sweat by trouncing the overmatched Altavista.

Staunton used a three-touchdown second quarter to earn its second victory of the season, knocking off Waynesboro 26-13.

The win puts Stuarts Draft into the regional final and one step closer to its quest of playing for a state title again.

Riverheads kept rolling as the Gladiators notched their sixth sweep of the shortened season.

Ridgeview coach Summer Woody speaks to her players Thursday during a VACA state quarterfinal match against Grace Christian in Staunton.