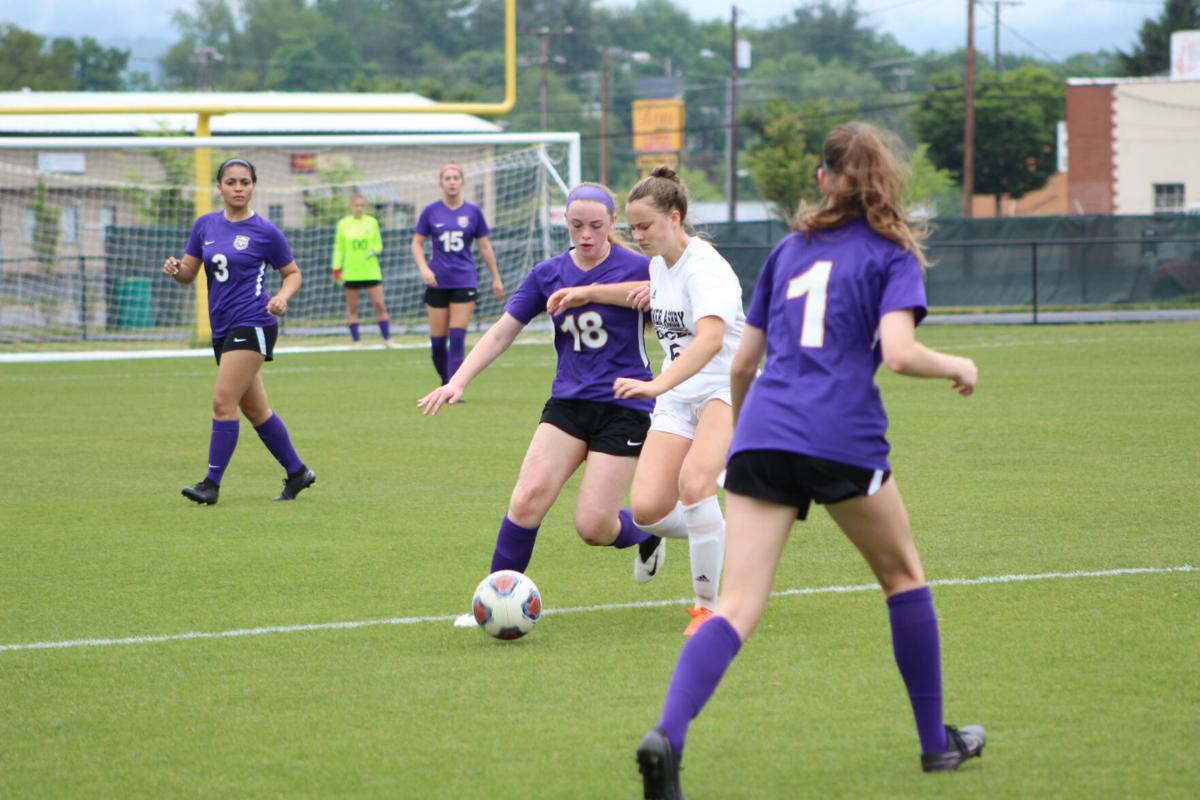 Little Giants’ Ashlynn Lundy fights for the ball against a Turner Ashby player during the Valley District semifinal game on Wednesday in Waynesboro. 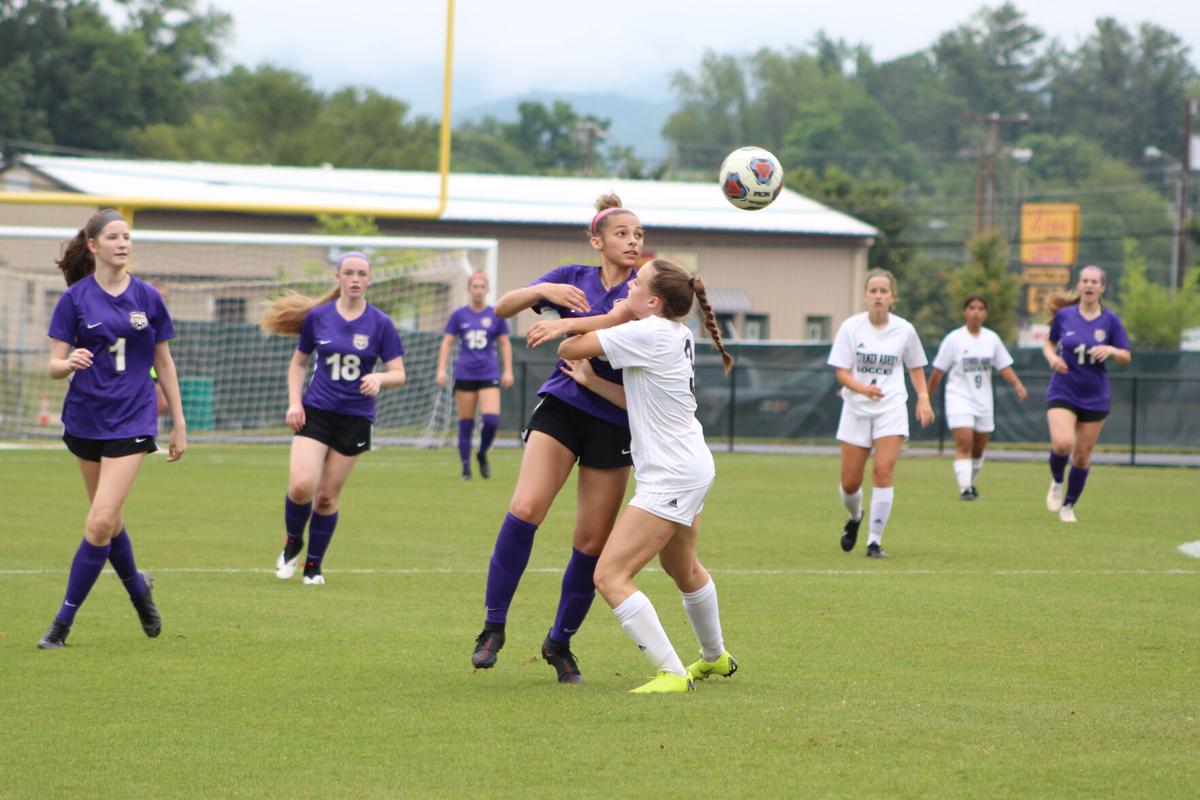 Waynesboro's Jaden Sprouse heads the ball during the Valley District semifinal game on Wednesday in Waynesboro. 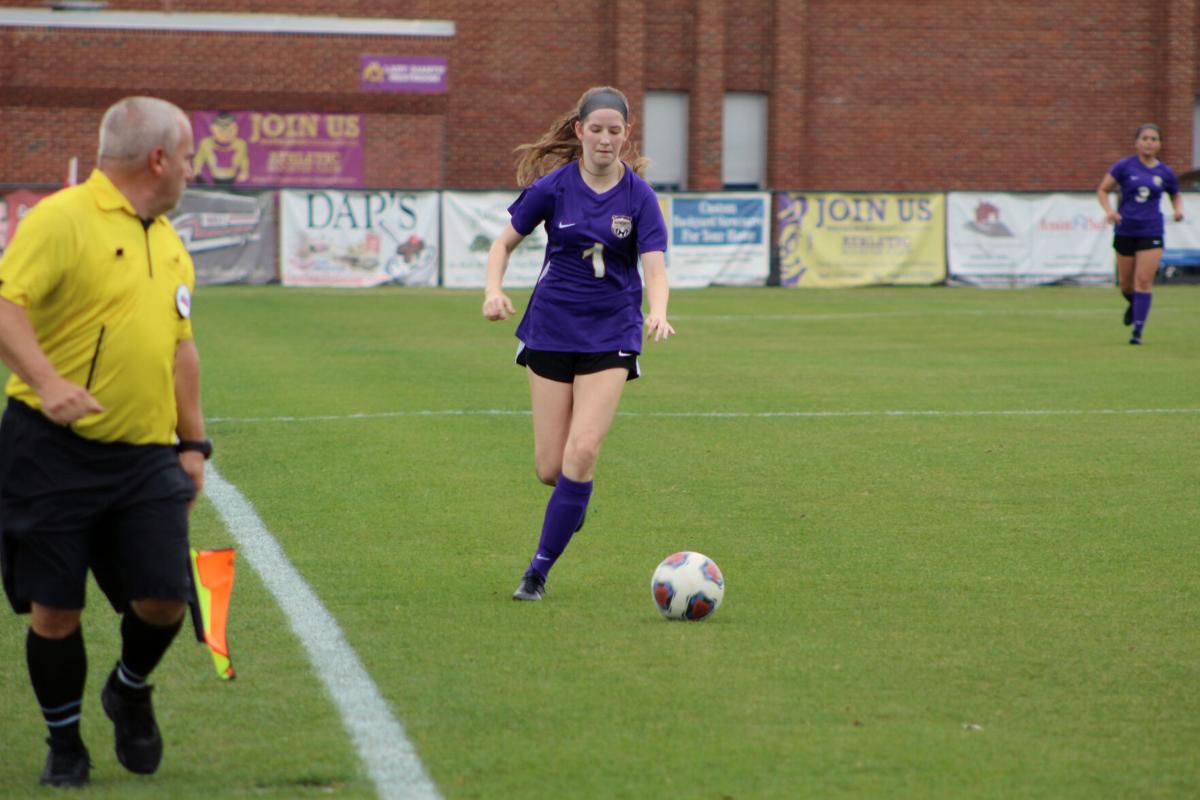 A Waynesboro player moves the ball up the field for the Little Giants during the Valley District semifinal game on Wednesday in Waynesboro.

Bill Meade For the News Virginian

The Waynesboro girls soccer team came away with a region-qualifying 1-0 victory Wednesday over visiting Turner Ashby in the semifinals of the Valley District soccer tournament.

Despite having defeated the Knights twice during the regular season, the Little Giants had to do it a third time in order to keep their season going.

After a 90-minute rain/lightning delay, the teams squared off in what was a physical struggle throughout.

The Waynesboro offense looked strong to begin with, pushing continually into the Knights’ defense.

The only goal of the contest came as a result of a hard foul by the Knights, which resulted in yellow cards being issued on both teams.

Senior Jordie Roberts stepped up to take the free kick from long distance and scored into the right corner of the goal past the shocked Turner Ashby goalie.

That goal would stand up for the rest of the game as the two rivals battled for control of the pitch.

Six minutes later, the Knights gained their best opportunity when senior Grace Mowery fired a shot off the top of the crossbar and back onto the field of play.

The Giants weathered that chance and closed out the half with timely defensive play.

“Our defense saved us today,” said Waynesboro head coach Eli Moore. “We turned away their best chances; and they certainly had some.”

The action intensified further in the second half as Turner Ashby desperately pressed the attack and took away much of the Waynesboro passing attack which the Little Giants had enjoyed in the first 40 minutes.

“They came after us in the second half,” Moore said. “They felt the pressure of getting to regionals and they were pushing.”

Despite getting some players banged up in the second half, the Little Giants absorbed the pressure and turned away the Knights’ scoring threats.

With about four minutes remaining in the game, Mowery broke through the last line of defense and had her sights set on the Waynesboro goal.

But Waynesboro senior Cierra Bruce chased her down from behind and tackled the ball out of bounds. The Little Giants gave up a corner kick on that series, but cleared the ball out of danger to preserve the hard-fought win.

Next up for the Little Giants (9-3) overall is a Thursday clash in Harrisonburg against the winner of the Spotswood vs. Harrisonburg match for the tournament victory.

Having sewn up their regional bid, Waynesboro will likely face Lynchburg Christian on the road early next week.

Countries that have never won an Olympic medal

Waynesboro is now officially a member of the Shenandoah District after leaving its decades-long association with the Valley District.

Little Giants’ Ashlynn Lundy fights for the ball against a Turner Ashby player during the Valley District semifinal game on Wednesday in Waynesboro.

Waynesboro's Jaden Sprouse heads the ball during the Valley District semifinal game on Wednesday in Waynesboro.

A Waynesboro player moves the ball up the field for the Little Giants during the Valley District semifinal game on Wednesday in Waynesboro.