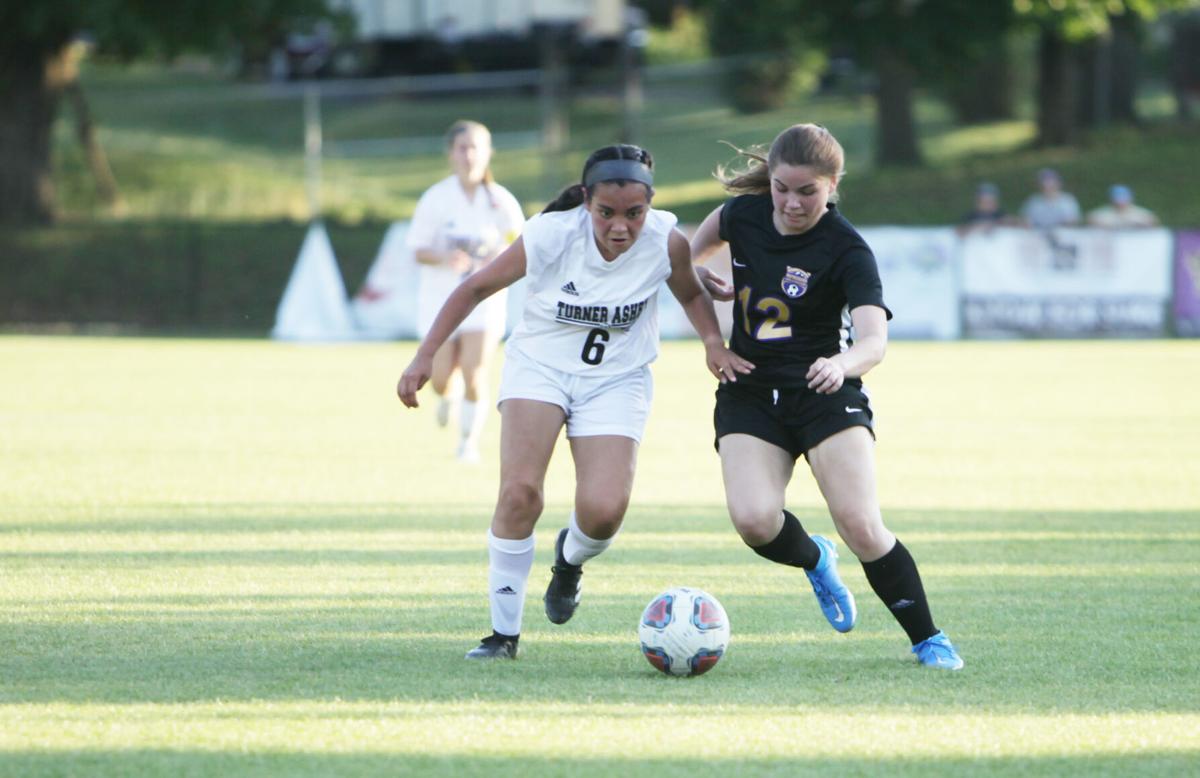 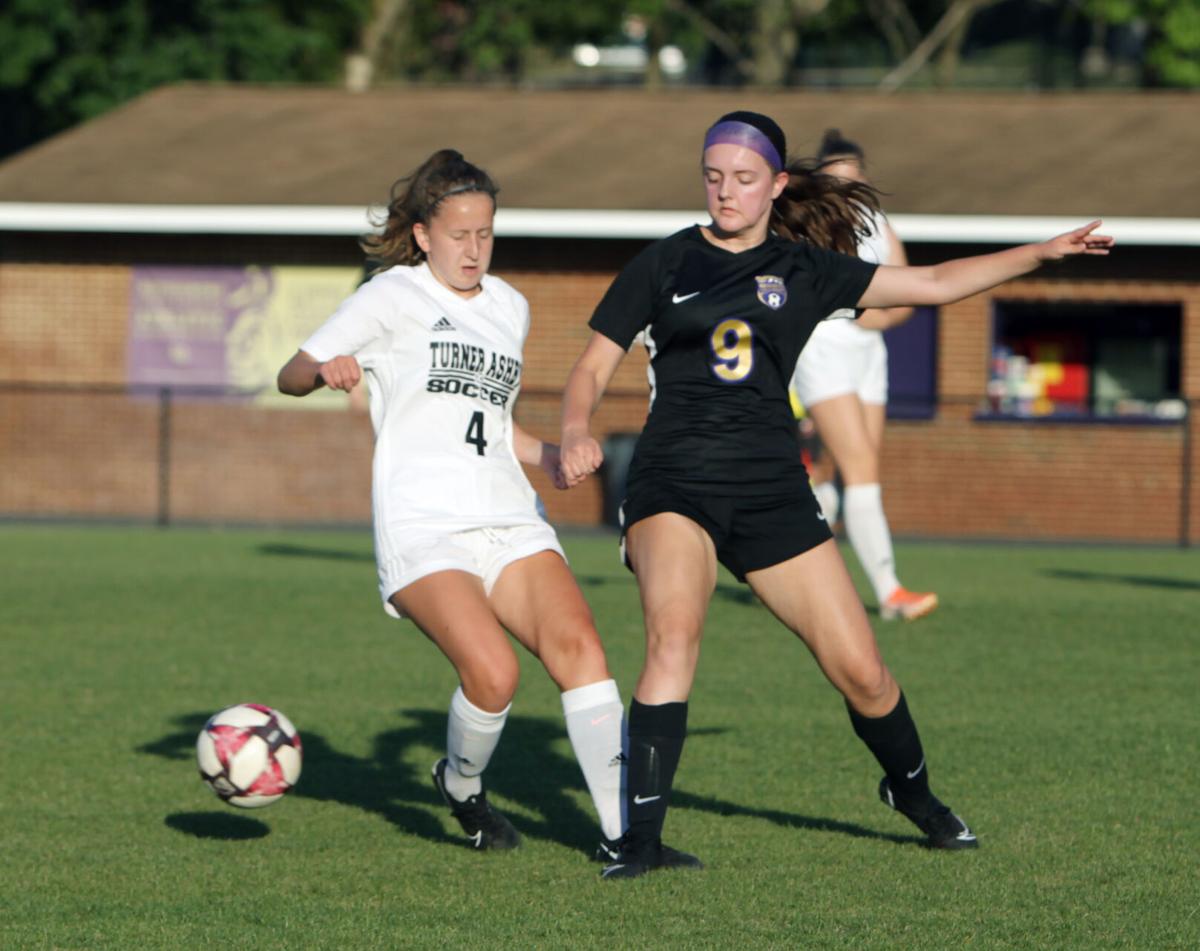 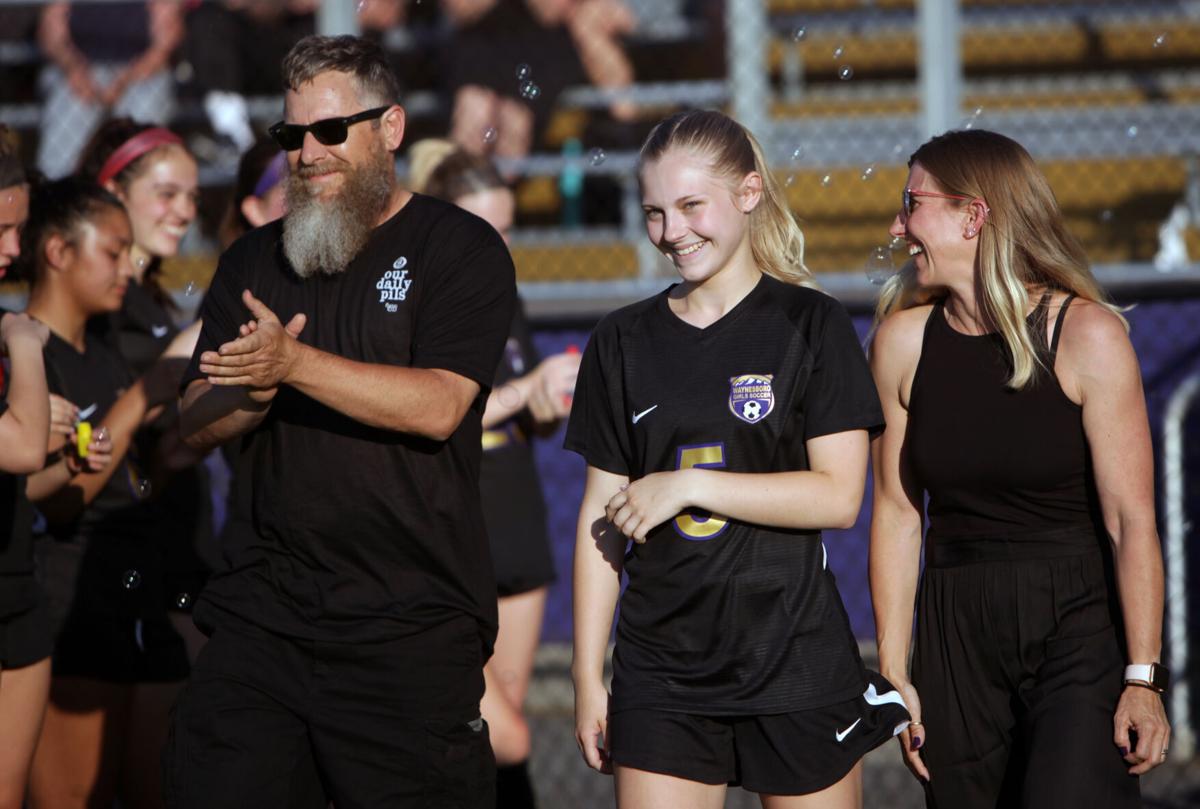 Waynesboro's Eve Lanman laughs on the sidelines during a game against Turner Ashby on Friday in Waynesboro.

And Waynesboro junior midfielder Jaden Sprouse has it.

“As soon I got the ball and I received it, I knew people were going to step up and pressure,” Sprouse said. “I knew I had one touch. I could see from the corner of my eye where the keeper was, and what little space I had, and I just ripped it. As I fell, I was like, ‘I think it’s in!’”

Waynesboro coach Eli Moore was already a bundle of nerves even before the game. This Senior Night was particularly special to him, because Moore took over the program when the 2021 class of athletes were freshmen.

They’ve been together all four years.

He had to wait until the 80th minute, but Moore finally got to celebrate with the Little Giants upperclassmen Cierra Bruce, Eve Lanman, Jordan Roberts and Ahjmani Daniels.

“What a senior night,” Moore said. “This is such a great group of girls. After Wednesday night (an overtime loss to Harrisonburg), there was a lot of soul searching. We pulled together. These seniors were freshmen when I took over the program, and we’ve turned it around. We’re a winning program now. They were the pillars. They were the start of it.”

The program is strong enough that Moore was able to pull five freshmen up off the junior varsity squad last week. Freshman Grace Lanman got to play some minutes with her senior sister Eve on Senior Night.

One of those Little Giant freshmen, Ava Wagner, had the game-winning assist in just her second game on the varsity level.

“I got a through ball, and I took it out wide and crossed it,” Wagner said. “I just saw somebody running in, and I just kicked it.”

Wagner fell after delivering what would turn into the game-winning assist.

The Little Giants picked up the district win without talented junior Kate Ledford, who suffered a leg injury in the team’s 1-0 overtime loss to Harrisonburg. For the second straight game, the Little Giant defense pitched a shutout in regulation, setting the stage for Sprouse’s late-game heroics.

“We kept preaching the whole night that it was available down the side,” Moore said. “You get those little seam gap balls in there, you’re going to have opportunity to score. We knew it was going to eventually happen, but not that late. We didn’t need all that extra stress.”

Better late than never for Sprouse.

“Jaden is an amazing player,” Moore said. “She’s special. She works really hard every day. It’s always just a matter of time for her, and she comes up big in those situations.”

Kate Alger pitched a complete-game shutout that featured 131 pitches, giving up three hits and four walks with 14 strikeouts as second-seeded Buffalo Gap pulled off a 2-0 upset of top-seeded Page County.

Mike Gale will be the new girls basketball coach at Fort Defiance, which is closer to his home in Verona.

Riverheads will have to wait another year in a bid to win its third state championship in baseball.

Riverheads pounded out 20 hits and scored nearly the same number of runs Thursday night as the Gladiators clobbered the Central Lunenburg Chargers.

Waynesboro's Eve Lanman laughs on the sidelines during a game against Turner Ashby on Friday in Waynesboro.