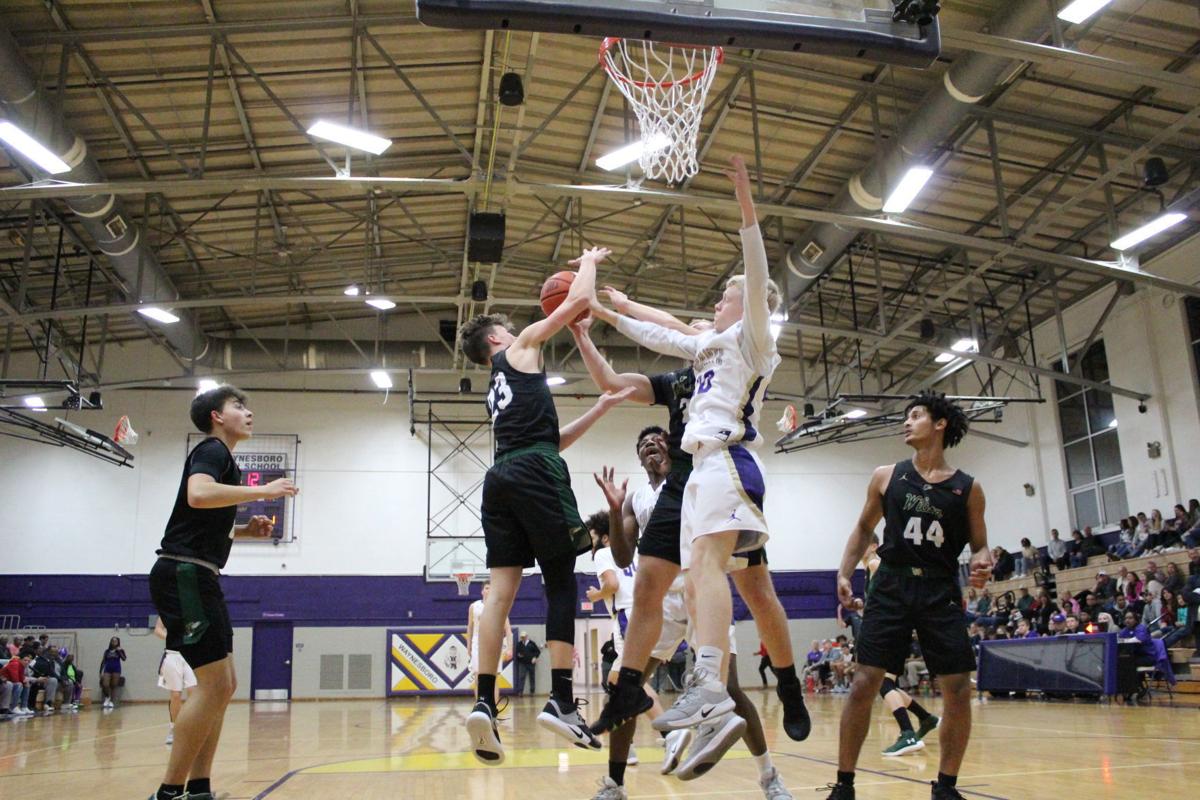 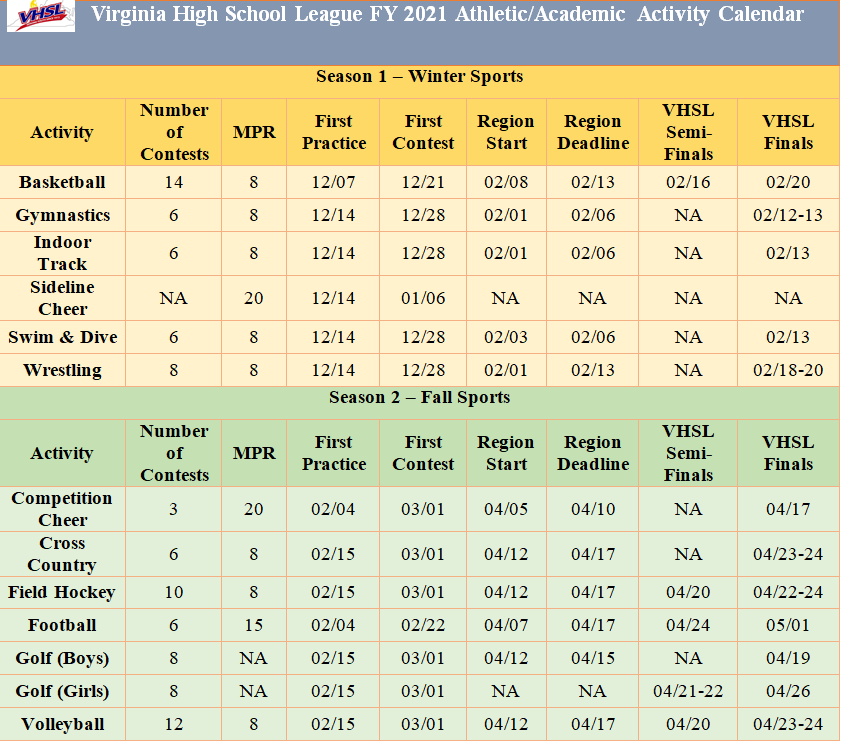 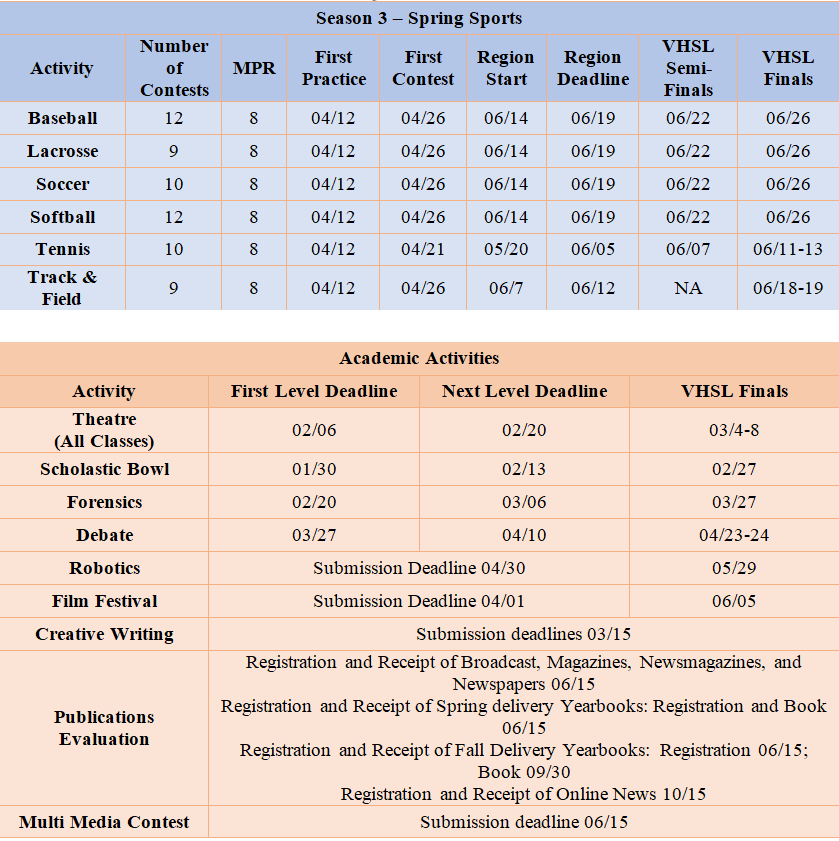 Area high school athletic directors, head coaches and student-athletes finally have a blueprint on how the condensed 2020-21 sports calendar will be played out.

The Virginia High School League’s Executive Committee unveiled a tentative scheduling plan Monday during a Zoom meeting. VHSL Executive Director Dr. Billy Haun stressed nothing from Monday’s work session is set in stone as the committee is still looking for feedback. The finalized plan is expected be announced Sept. 3.

All sports will see a 40% reduction in the number of regular season games played. Football has been cut to six from 10, while basketball’s limit is 14 from the maximum 22. Baseball and softball both are 12, down from 20. Volleyball also has only 14 matches.

The committee did recommend that basketball practice start a week earlier on Dec. 7 and the first games are now Dec. 21 instead of Dec. 28. The 14-game schedule will not force three games per week unless Mother Nature intervenes.

The six-game football schedule means the Shenandoah District teams will only have to play one nondistrict opponent, while Waynesboro, which is in its final year as a member of the Valley District before joining the Shenandoah, also needs just one nondistrict contest. The season will cover seven weeks, including a bye week, and can start on Feb. 22 and end on April 2.

Buffalo Gap athletic director Andrew Grove said it is unclear whether the six Shenandoah District teams will play the nondistrict game in-house or go outside the district. He said that will be decided later at a district AD meeting.

The VHSL urged that no district may intentionally disadvantage a member school relative to scheduling.

Riverheads athletic director Tim Morris thinks the sixth game will be outside the Shenandoah.

“The Shenandoah is going to take care of the district first and then we will put the rest of our schedules together,” he said. “We are going to meet soon to look at the different options and get in place a schedule as soon as possible.”

One side note is that teams in every sport which do not make the postseason can play one ‘bowl game.’

For example, non-playoff football teams can play a seventh game against an area school or school in that team’s respective region.

Grove was pleased with the athletic plan that was presented.

“My biggest takeaway is they still plan on having state championships in everything,” he said. “If the athletes are out there competing, they need to have the opportunity for a state title. I like the plan. The VHSL made the best out of a horrible situation.”

“It won’t be a massive headache,” he said. “With fewer nondistrict games, you should see a lot of great matchups since we can pick-and-choose for our one or two nondistrict contests.”

Buffalo Gap head football coach Brad Wygant knows a lot of challenges lie ahead, but is happy the road appears to be heading toward a season.

“Six games is enough to show if a team is worthy of the playoffs,” he said. “Each week is going to matter more now. There can’t be any wasted time during practices since there won’t be any scrimmages. This unique situation will show the maturity of the athletes in every sport. Attention to detail and focus will be crucial every day.”

Wilson Memorial boys basketball head coach Jeremy Hartman would have liked a 16-game schedule, but is good with 14. He said the Green Hornets’ preferred two nondistrict opponents would be Waynesboro and Charlottesville.

“I will just be happy to have a season so the kids can have the opportunity to play,” he said. “I will be thankful if we are playing in December. There is a lot of time between now and the first practice on Dec. 7. Keeping the fingers crossed.”

“I would love nothing more than to play and get back to normal, but there is just so much going on right now,” he said. “Who is to say what is going to happen a week from now or a month from now much less by December. Hopefully everything falls into place and we are back on the court.”

The obstacles are many for the 2020-21 season to even happen, but at least a little sense of normality has returned.

The 2020-21 high school athletic schedule plan is finally in place, and now the attention can turn to hopefully games getting played.