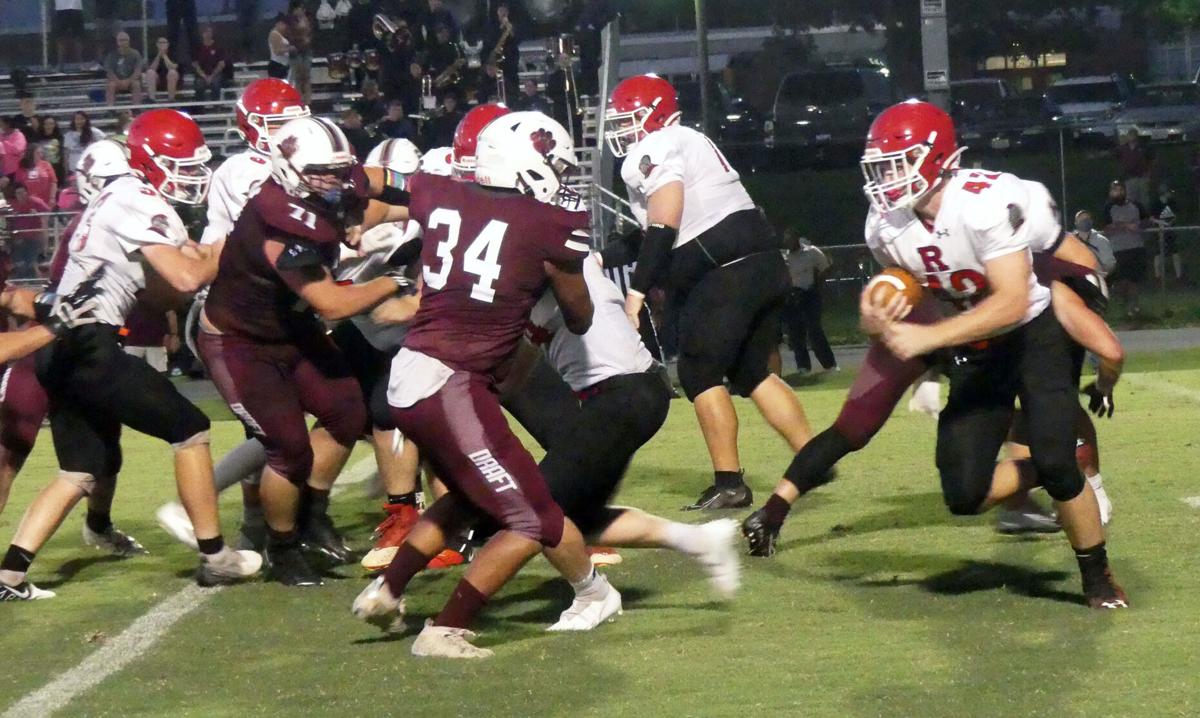 Riverheads running back Luke Bryant takes the ball into traffic against the Cougars on Friday night in Stuarts Draft. The Gladiators won the game, 28-10. 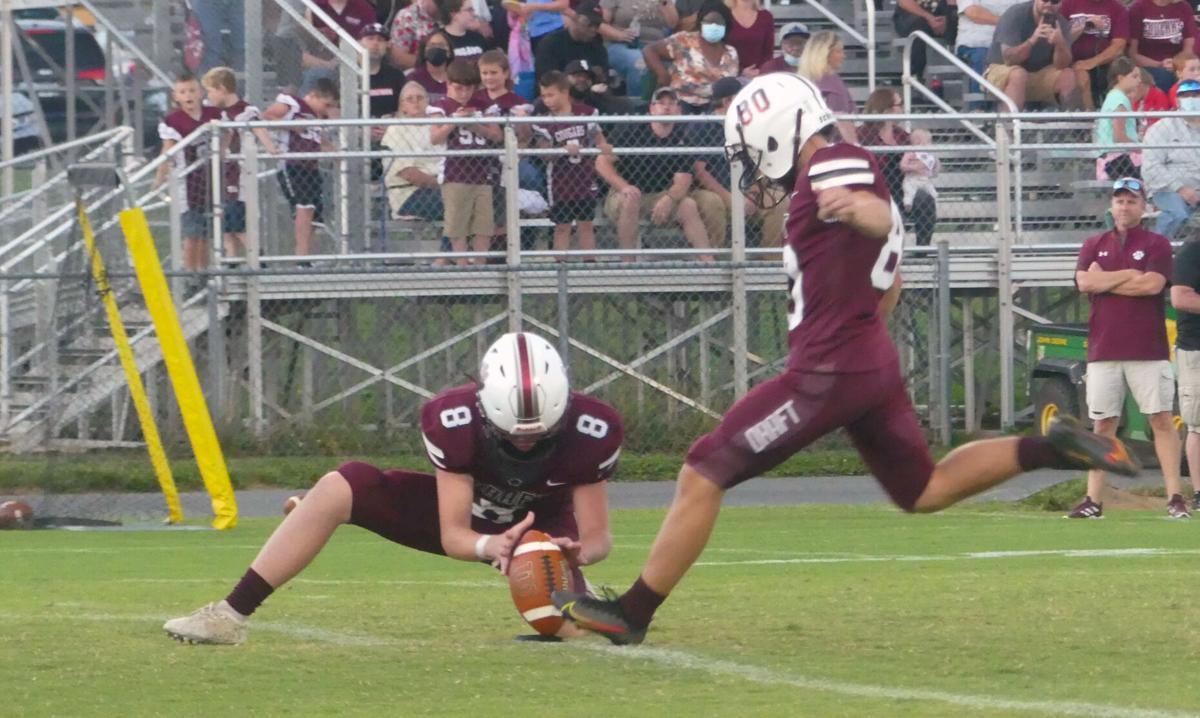 Stuarts Draft’s Jonathan Puckett holds the ball for kicker Bryce Dennison during Friday’s game against Riveheads in Stuarts Draft. Dennison hit an extra point and a field goal in the game. 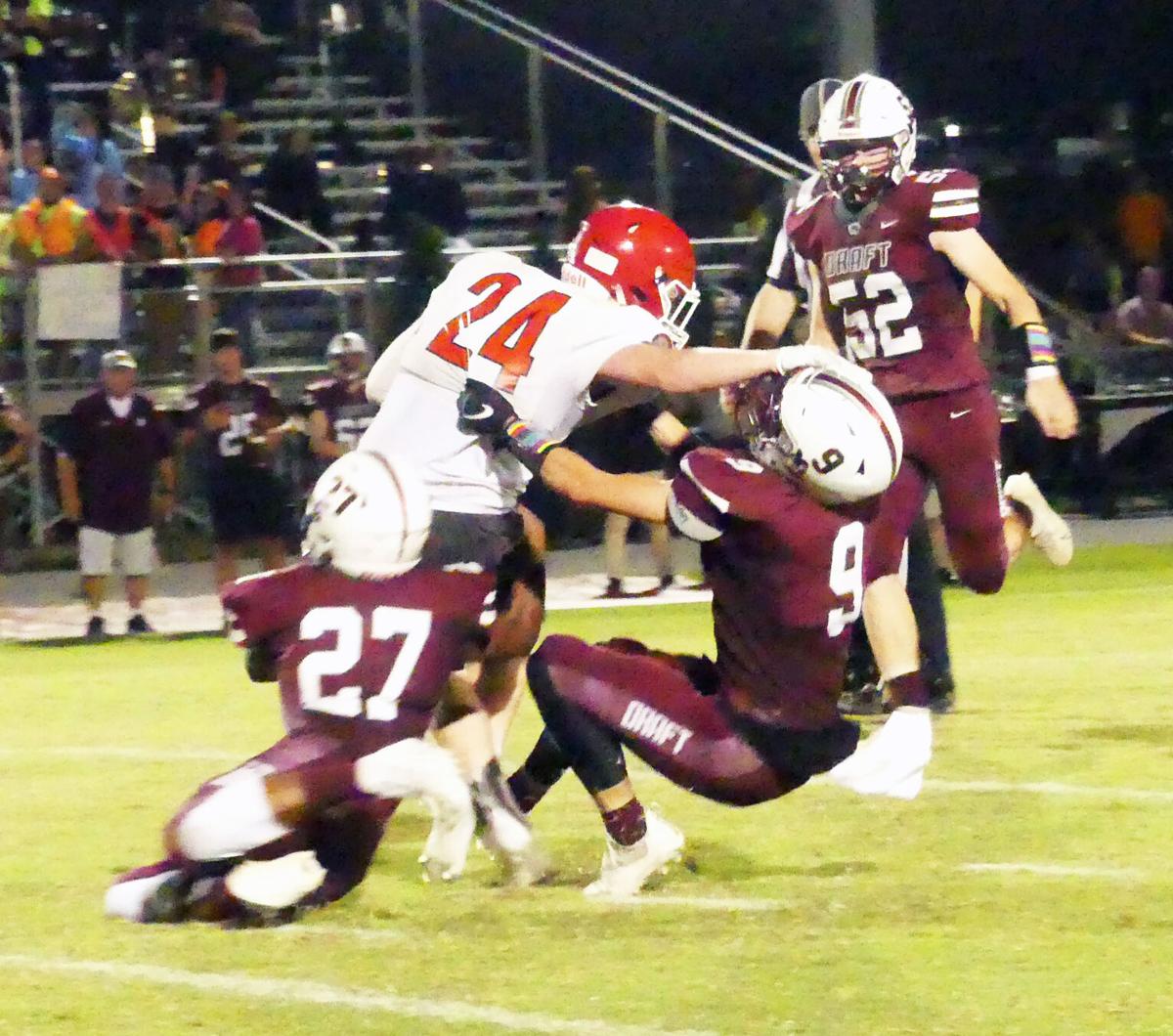 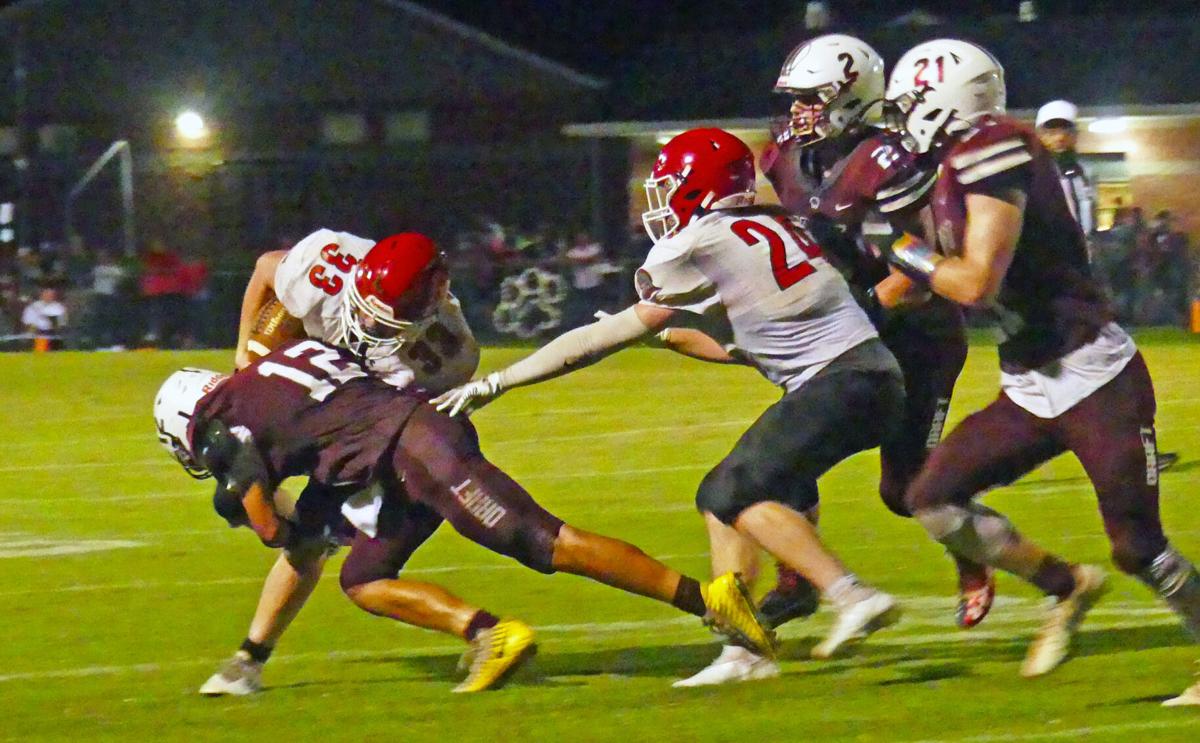 Stuarts Drafts’ Landon Graber throws a cross body block to Cayden Cook-Cash in an effort to bring the Gladiator down Friday night in Stuarts Draft. 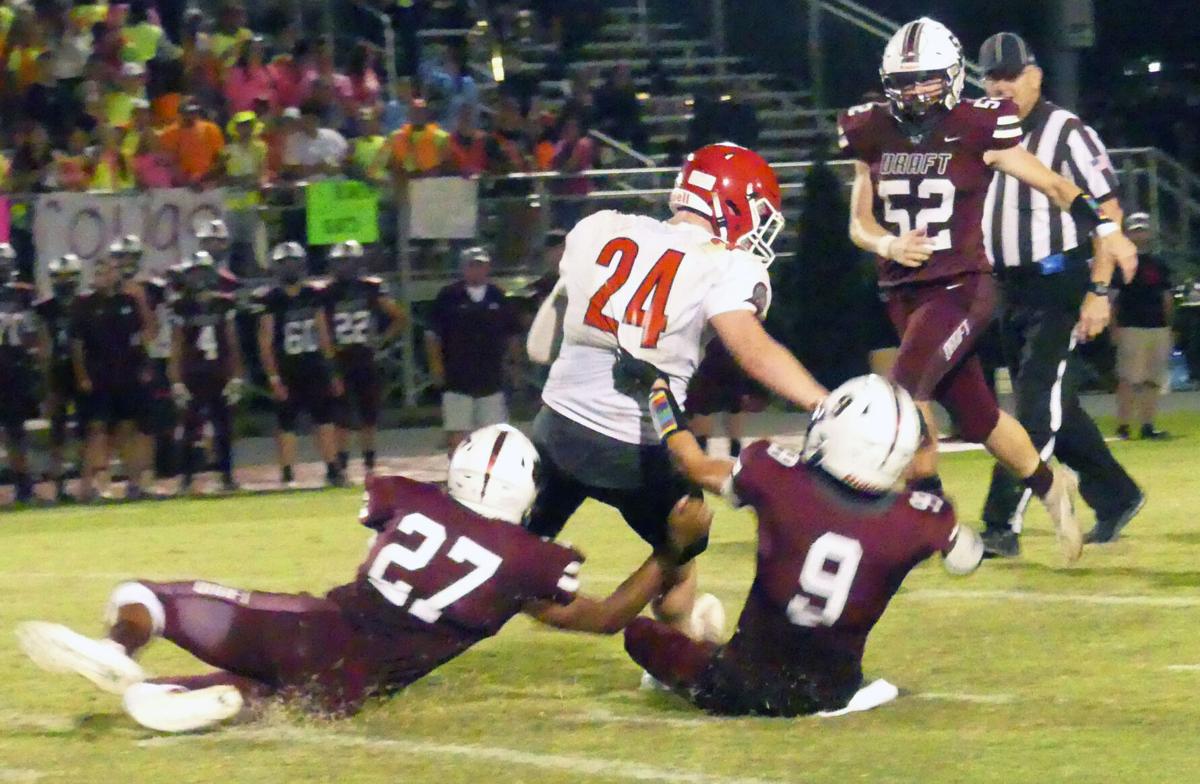 STEVE COX For The News Virginian

STUARTS DRAFT — Stuarts Draft went toe-to-toe with Riverheads in the first half Friday night, but the Gladiators cranked up their running game in the second half, turning a 10-7 halftime deficit into a 28-10 victory — the 40th consecutive win for the Red Pride.

“We were playing a team tonight that is very familiar with us and that makes a difference. They know what we’re going to do and we know what they’re going to do. We had to make a couple of adjustments at halftime with our blocking schemes and we came out and ran the football better in the second half.”

The Cougars forced Riverheads to punt on the first possession of the game with Draft starting its first drive on the Riverheads 37-yard line. Spencer Nice carried three straight plays for a total of 16 yards, moving the chains for a first down at the Riverheads 16. Xavier Grigsby found the end zone on a 3-yard run and Bryce Dennison added the point after for a 7-0 Draft lead.

Riverheads answered on its next series with a 64-yard drive. Bennett Dunlap hit Landon Lightner for a first down and a 10-yard gain and a personal foul penalty tacked on to the end of the play moved the ball to the Draft 33. After a 3-yard run by Cayden Cook-Cash, the Dunlap-to-Lightner combo clicked again, this time on a 30-yard scoring pass. Cooper Robson added the PAT to tie the score with 5:10 left in the first quarter.

After an exchange of punts, Draft put together another scoring drove, starting from the Riverheads 49. Grigsby ripped off a 21-yard run on a sweep to move the Cougars to the Gladiators’ 25. The drive stalled at the 8-yard line, forcing Draft to settle for Dennison’s 25-yard field goal and a 10-7 lead.

The Cougars had an opportunity to add to the lead just before half. A 37-yard run by Nice moved Draft into Riverheads territory at the 22-yard line. The drive stalled and Dennison booted a 35-yard field goal for a 13-7 lead. A roughing the holder penalty was called against Riverheads and the Cougars elected to take points off the board as the penalty gave Draft a first-and-goal at the 9-yard line. On a third down play form the 13, Riverheads’ defensive tackle Cody Cash picked off a screen pass to end the Draft threat.

“That was a really big play by our defense,” said Casto. “Draft scores a touchdown there and we would be down by 10 at halftime.”

Instead, it was a three-point Draft lead at the break and in the second half, the Riverheads offense took control. The Gladiators scored on their first three possessions following the break to open up a 28-10 lead.

After forcing the Cougars to punt to start the third period, Riverheads began its first series of the second half from its 38-yard line.

Riverheads needed 10 plays, all on the ground, to cover the distance. Cole Burton broke a 21-yard run right up the middle to put the ball in Draft territory at the 45. Cook-Cash carried the next four plays for 25 yards, moving the ball to the 9-yard line. Three plays later, Luke Bryant scored from the 3, giving Riverheads its first lead of the game.

Draft went three-and-out on its next possession with Riverheads taking over at midfield. A short pass to Burton for 4 yards and an 8-yard carry by Cook-Cash moved the chains to the Draft 38. Bryant then broke loose for a 38-yard scoring run, making the score 21-10.

The Cougars moved past midfield on its next series as three carries by Nice totaled 25 yards and an offside penalty against Riverheads moved the ball to the Gladiators’ 49. The Riverheads defense then came up with another big play as defensive lineman Randy Cash tipped a pass at the line of scrimmage and Cook-Cash came down with the interception, giving Riverheads the ball on its 46.

Riverheads then went to its ground-and-pound running game, running the ball 11 straight times to cover the distance. Cook-Cash scored on a 9-yard run with 5:09 left in the game, making the score 28-10.

170 seconds well worth it: Waynesboro has a competition cheer team for the first time in 6 years

Waynesboro High School hasn’t had a competition cheer team for the past six seasons. For context, that’s the year the Tom Brady-led New England Patriots beat the Seattle Seahawks in the Super Bowl.

On a day featuring a lot of sensational competition cheer performances, Stuarts Draft was still best.

Wilson Memorial will be dedicating its track as the Gary Kessler Track at Steve Geiman Stadium during Friday night’s football game against Stuarts Draft.

Buffalo Gap, playing at home for the final time during the regular season, put an end to its two-game losing streak.

Riverheads etched the 43rd consecutive notch on its winning belt after the Gladiators manhandled the fumble-prone Wilson Memorial Green Hornets on Saturday.

Riverheads rebounded from a four-set loss to district unbeaten Fort Defiance in its last outing that stopped a five-match winning streak.

The sweep was the second in two nights for Riverheads, now 7-3 in district play. The Gladiators put away Waynesboro 3-0 on Monday night.

Waynesboro (0-15, 0-9), again having to play on back-to-back nights, endured another sweep in what has turned into a lost season because of the month-long COVID-19 pause.

Riverheads running back Luke Bryant takes the ball into traffic against the Cougars on Friday night in Stuarts Draft. The Gladiators won the game, 28-10.

Stuarts Draft’s Jonathan Puckett holds the ball for kicker Bryce Dennison during Friday’s game against Riveheads in Stuarts Draft. Dennison hit an extra point and a field goal in the game.

Stuarts Drafts’ Landon Graber throws a cross body block to Cayden Cook-Cash in an effort to bring the Gladiator down Friday night in Stuarts Draft.