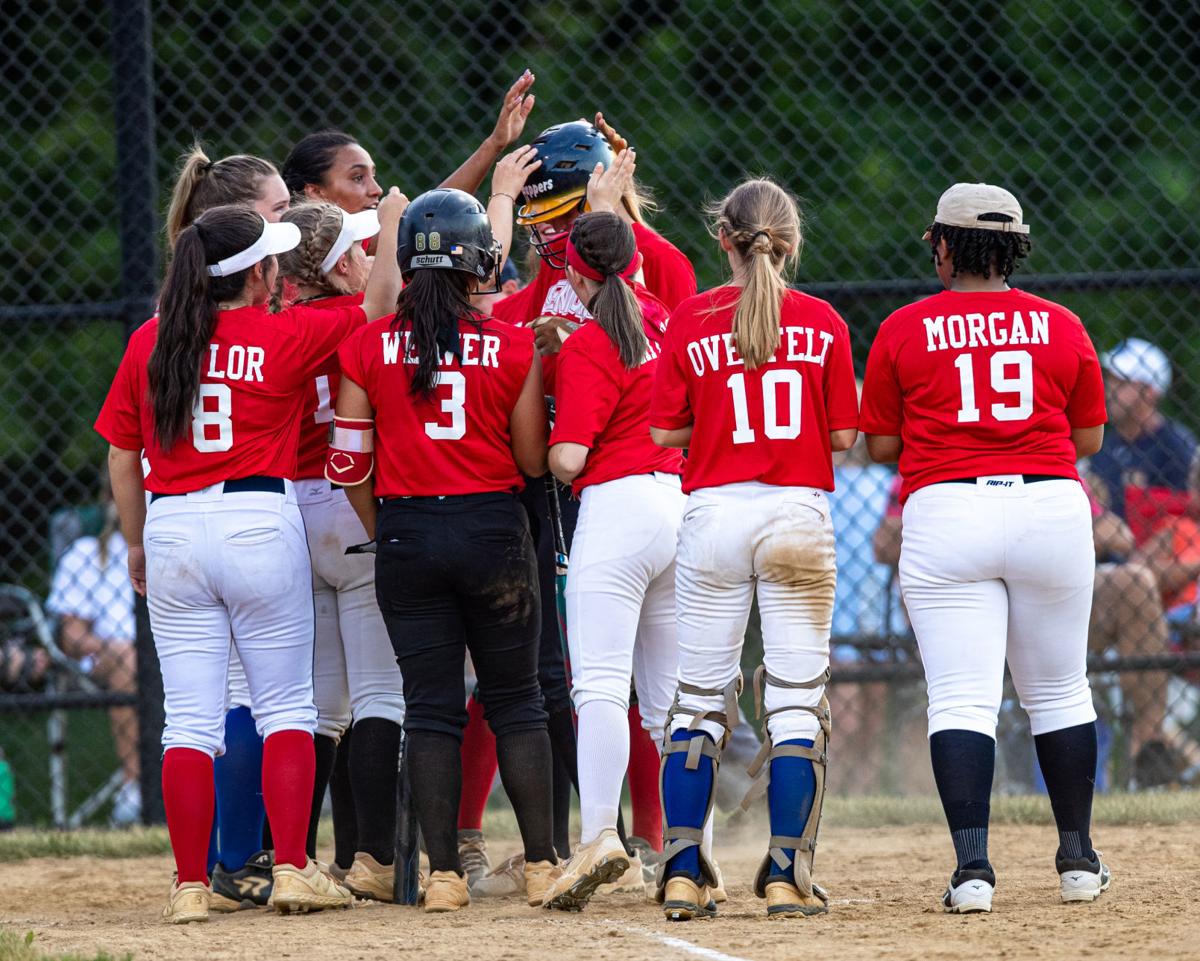 Blacksburg graduate and Christopher Newport recruit Katie Currin is patted on the helmet by her teammates after hitting a solo homer in the Red team’s win Tuesday in Salem. 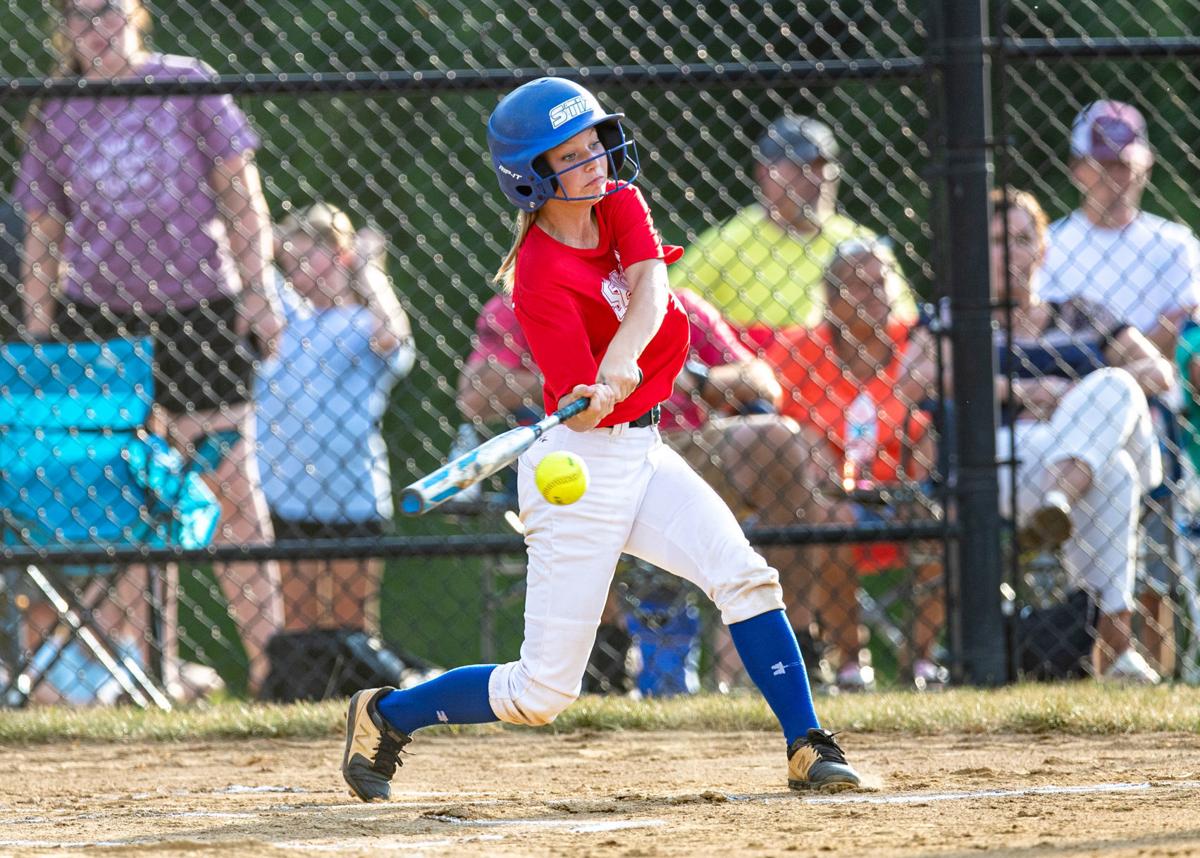 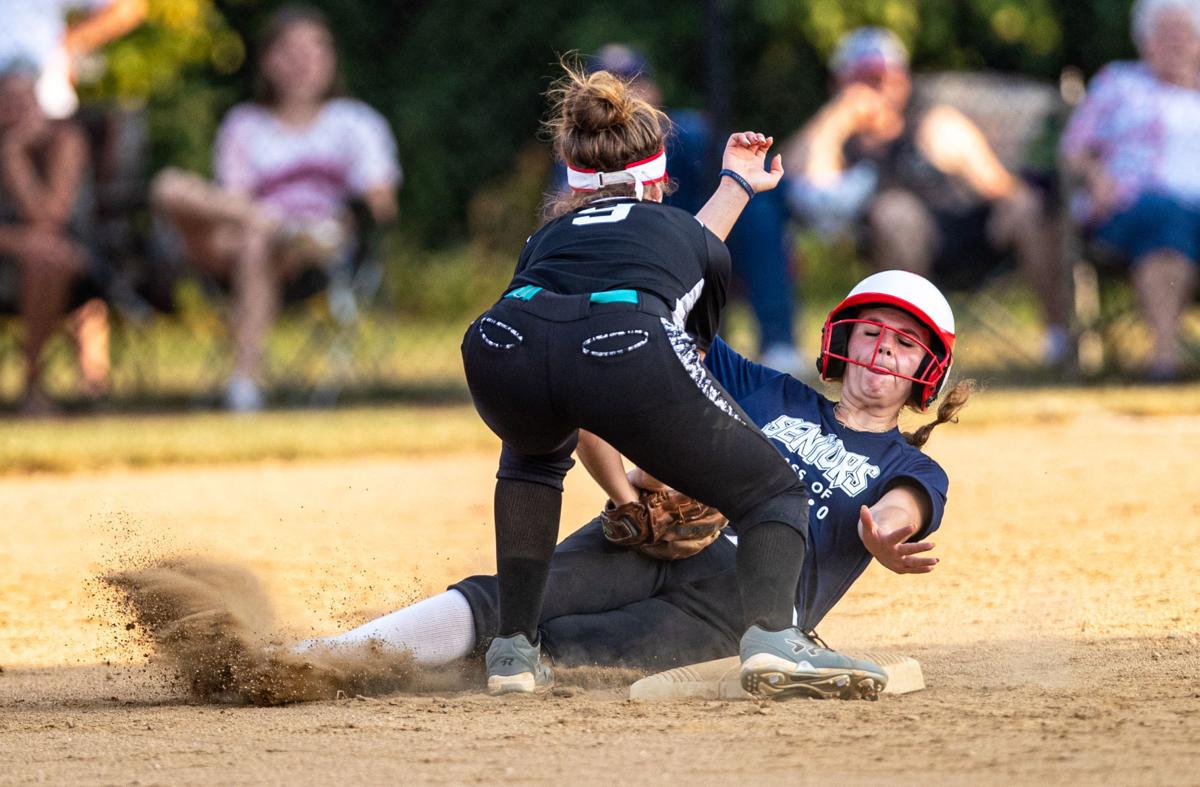 Jefferson Forest graduate Emily Garraghty (right) of the Navy team slides into second base during the Navy team's win Tuesday night in the senior softball games.

After missing out on their final season of high school softball, area players got another chance to feel like high school players this week.

And they were all smiles afterward.

The high school spring sports season in the commonwealth was wiped out by the coronavirus pandemic, so William Byrd assistant coach Kassie Brammer and a few others organized the senior softball games that were held Monday and Tuesday at the Arnold R. Burton Complex in Salem.

“It was honestly awesome,” James River graduate and Bluefield recruit Payton Kreklow said Tuesday after that night’s action. “Missing out on our senior year was pretty bad, but coming out here made it feel just like [being] back on the field with my friends — getting a second chance at having a senior year and playing with the girls that I grew up with.

“[After] playing against them all the time, coming out here and being able to play on the same team as them, it just made it all better.”

“It brought us together as a community.”

Forty-four players from high schools in Timesland, the Lynchburg area and Waynesboro participated.

“We all experienced the same awful thing of our season being canceled, and we all get to experience this awesome thing Kassie Brammer made for us, so it’s a really cool turnaround,” Cave Spring graduate and Virginia signee Abby Weaver said. “It means a lot to play with them.”

Like Wells and Kreklow, Weaver has been playing travel ball this summer and has college softball to look forward to. But she still wanted to play in the senior games.

“I never have enough softball,” Weaver said. “It’s my favorite thing to do. And this means a lot to everybody.

“It was a lot more competitive than I thought it would be. We were having arguments with umpires. It was fun. It was like a real game, like we were all on a team forever.”

Lord Botetourt graduate Maegan Barnes will be a nonplaying student at JMU, and she is not playing travel ball this summer. So the senior games were her last chance to play softball.

“It was great, just to end things off on a good note and know this was my last game and to have that closure,” she said. “Putting my helmet away was a little emotional.”

The games also marked the softball farewell for Lord Botetourt graduate Madison Gunter, who will be a nonplaying student at Virginia Tech. She is not playing travel ball this summer, either.

“This means everything to me, just getting to play together one last time with everyone,” Gunter said. “It’s very special that Kassie put this together, and I can’t thank her enough.

“It was very sad to not be able to have that season together with my teammates.”

William Byrd graduate Bri Hodges has been playing travel ball this summer, and she has University of Lynchburg softball ahead of her. But she still wanted to play in the senior games.

“I really just wanted to experience school ball one more time,” Hodges said. “It was just a good time to see everybody that I’ve seen over the years.”

“I was kind of nervous at first because we never played together, but we just really bonded,” Overfelt said. “We got so close, just within two days.”

The Red team beat the Black team 12-8 on Monday. Kreklow, who had two hits and four RBIs, was named the most valuable player of the game.

The Red team edged the Gray team 5-4 on Tuesday. Weaver was named the MVP of that game. She struck out seven batters in six innings and also belted a three-run homer.

After beating the Gray team 13-6 on Monday, the Navy team defeated the Black team 4-2 on Tuesday. Wells was named the MVP of both games. On Monday, she struck out nine batters in five innings and hit a three-run homer. On Tuesday, she pitched a complete game and smacked a two-run shot.

FISHERSVILLE — When Jeremy Hartman was thinking of candidates to join his boys basketball coaching staff at Wilson Memorial, one name kept com…

Michael Freeman is the latest addition to the Green Hornets’ coaching staff as he will serve as the head coach in girls cross country, indoor track and girls outdoor track.

On Friday, the VHSL held a virtual workshop that outlined a detailed draft of the adopted condensed interscholastic plan for the 2020-21 school year.

The Advancing Christ Through Sports (ACTS) Eagles are all geared up to play the 2020 season.

Area athletes agree “something was better than nothing” and are enjoying getting back into action in informal open gyms and workouts.

There will be no Friday Night Lights, or for that matter, any other lights for high school fall sports in the state.

Blacksburg graduate and Christopher Newport recruit Katie Currin is patted on the helmet by her teammates after hitting a solo homer in the Red team’s win Tuesday in Salem.

Jefferson Forest graduate Emily Garraghty (right) of the Navy team slides into second base during the Navy team's win Tuesday night in the senior softball games.