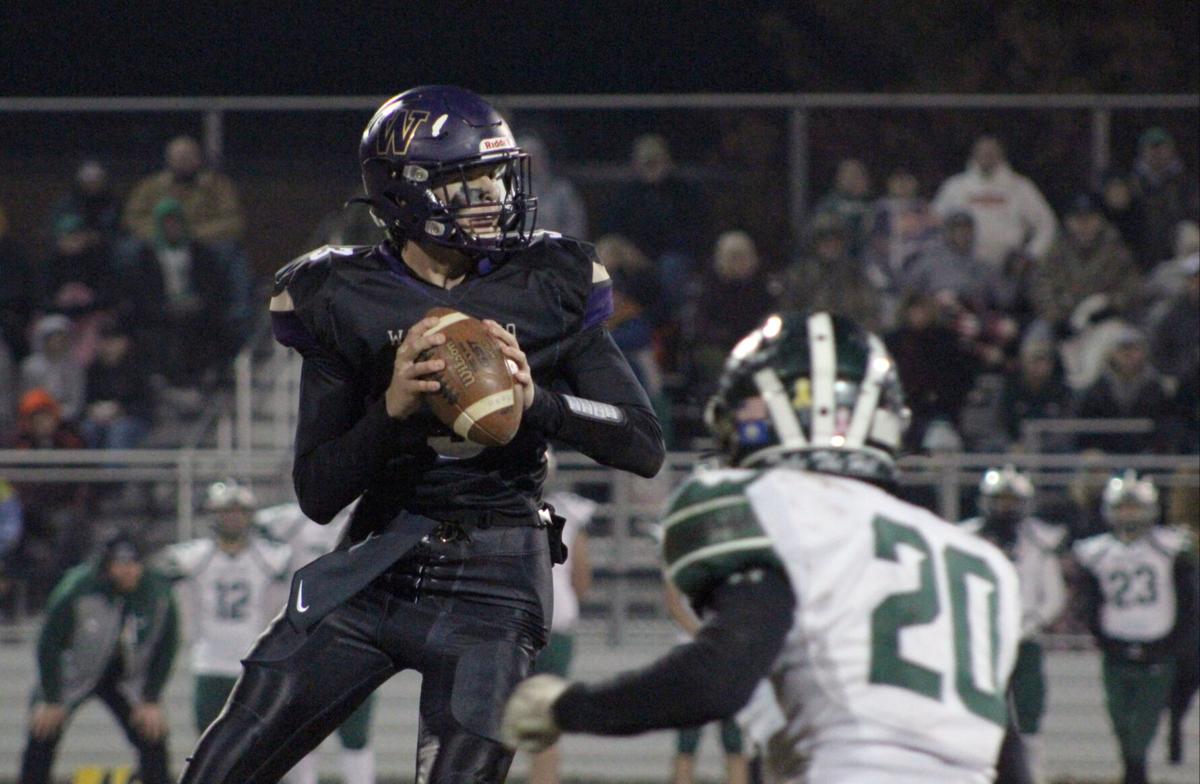 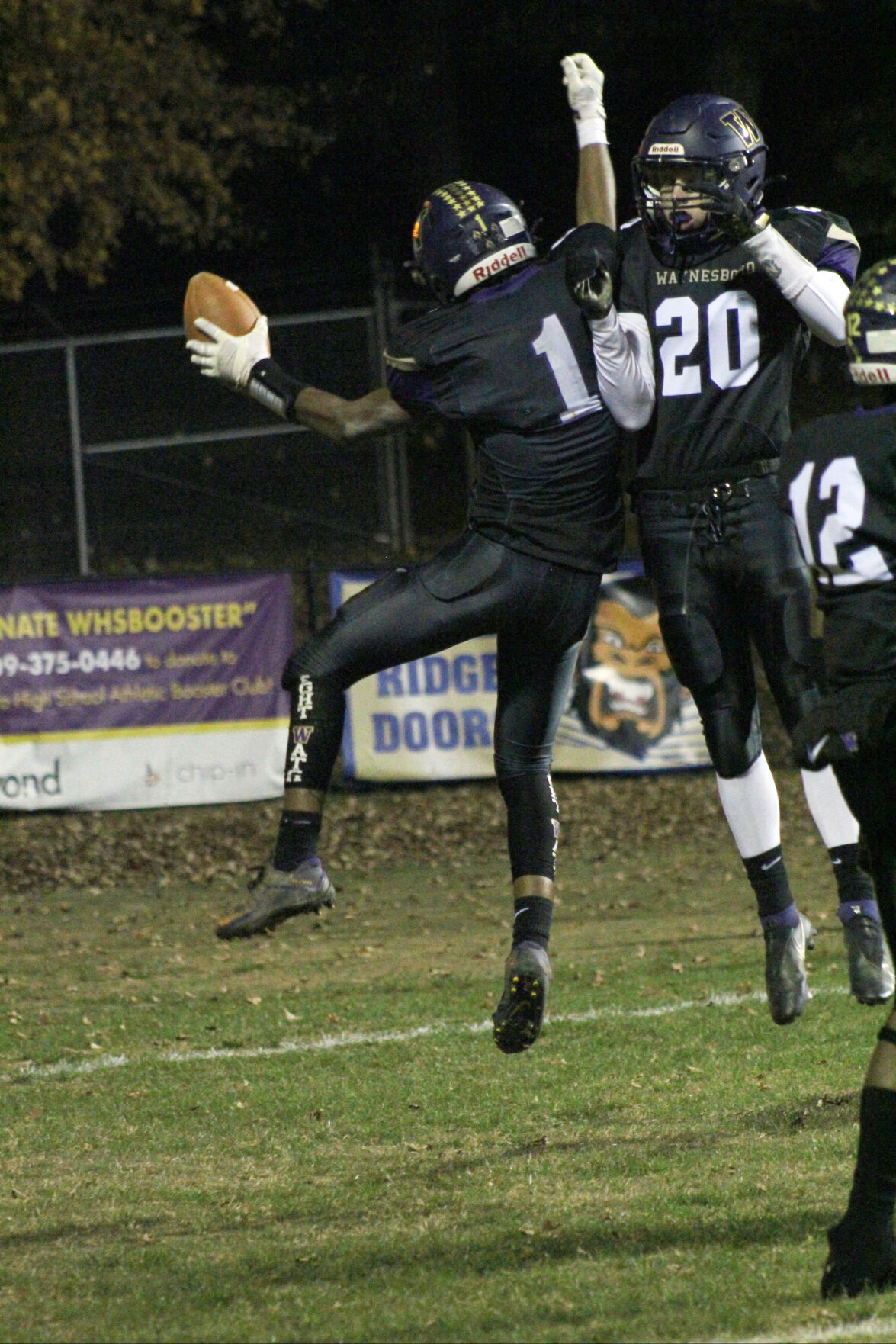 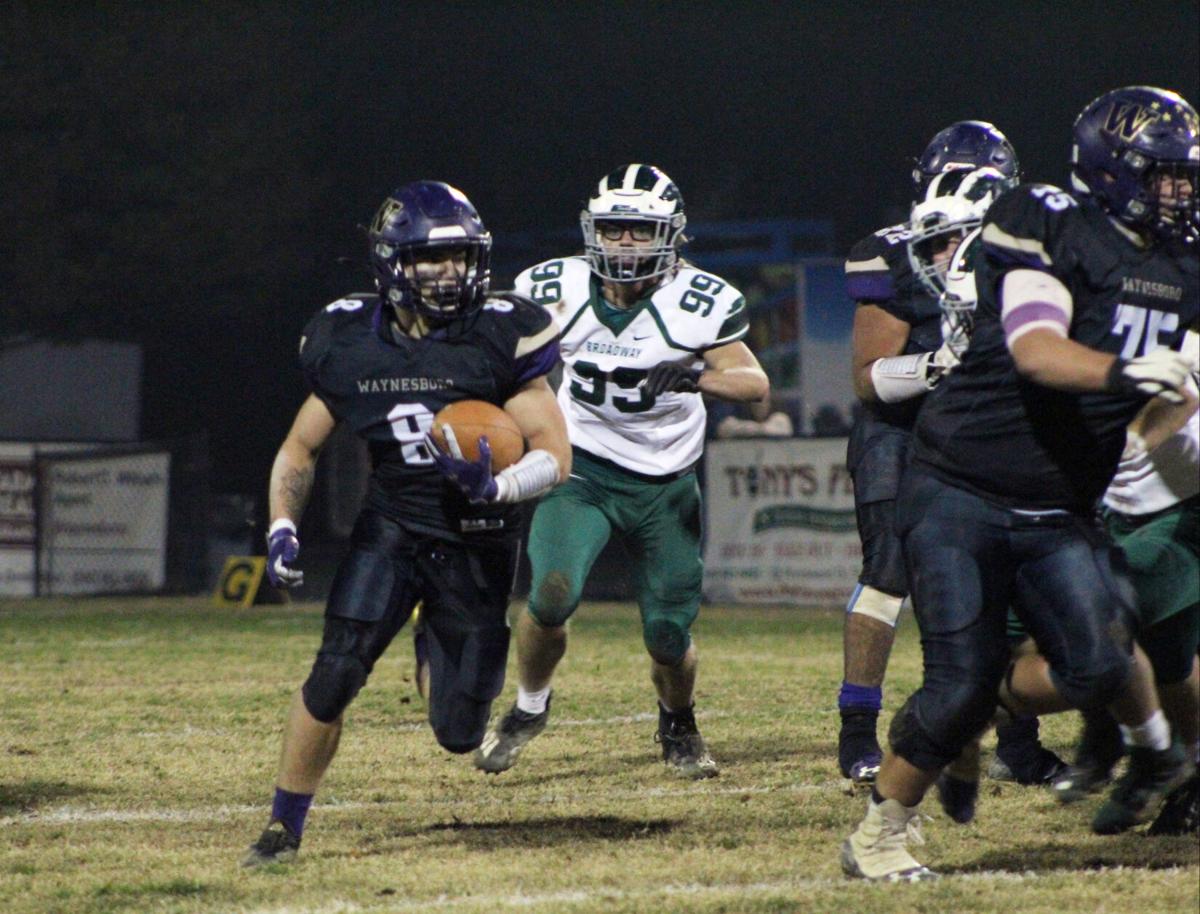 Ryan Barbour gains yardage for the Little Giants on Friday against Broadway in Waynesboro.

In March, the Waynesboro Little Giants won their first game since 2017, snapping a 24-game losing streak which was the third the third-longest in the state at the time.

Fast forward to Friday, Waynesboro’s defense held the team’s playoffs hopes in their hands on the final play of the game. Broadway quarterback Landon Stuhlmiller had just scrambled for a 26-yard touchdown as time expired, and the Gobblers were just a two-point conversion away from sending a game they once trailed by 14 into overtime.

Stuhlmiller scrambled out to the right, looking to make something happen with his legs once again. The Giants met him behind the line of scrimmage for a massive hit with an even louder ovation from the home fans as Waynesboro secured the 28-26 nondistrict win over visiting Broadway.

The Little Giants are playoff bound.

“At first, I thought a timeout to cool our heads, but then I saw the defense, and they were ready to go,” head coach Brandon Jarvis said of the last play of the game. “I said, ‘we’re just going to play football,’ and that’s what they did.”

The game started at a blistering pace, as the teams combined for 28 points in the first quarter.

The Giants kicked off the scoring after a couple of big runs from Lazarus Powell put the team into Broadway territory, which led to Waynesboro catching the defense off guard with a 35-yard screen pass to Te’Shawn Gamble to the end zone.

Broadway running back Cameron Showalter responded on the second play from scrimmage by breaking off a 64-yard touchdown run to even the score. After forcing a Waynesboro punt, Stuhlmiller capped off another Gobblers drive with a 32-yard touchdown run of his own with 53 seconds remaining in the first quarter.

Waynesboro quarterback Blake Jones slung another screen pass, this time to Ryan Barbour, which led to another explosive 55-yard score.

Jones racked up four touchdowns on Friday, the two in the first quarter and two rushing touchdowns off QB sneaks in the second and third quarter.

“I’ve got to thank my offensive line and the defense. There’s no I in team. We play as a team and win as a team,” Jones said.

The Waynesboro defense settled down after the first quarter, holding Broadway scoreless in both the second and third quarters as the offense extended the Giants lead to 28-14 entering the final quarter.

On the Gobblers opening drive of the fourth quarter, Stuhlmiller connected with receiver Brody Carr for a 66-yard score. A missed extra point made the crucial difference in the game and led to the two-point drama at the end of the game that saw the Giants racing out to the field to embrace their teammates.

“Broadway is a great football team. We went into the half with the lead, but we knew they were going to battle back, and they did just that. With every punch they threw, our kids battled back,” Jarvis said. “A little messy ending to the game there where we’re just looking to run out the clock. We made some poor mistakes mentally, but in the end, I’m proud of these guys. They deserve everything they got right there.”

Along with Jones’ four touchdowns, Powell provided 119 rushing yards on the night. Barbour accumulated 160 all-purpose yards to go along with his receiving touchdown. Defensive back Emerson Miller contributed a forced fumble which turned a 52-yard reception by the Gobblers into an eventual score for Waynesboro.

Waynesboro finishes the season 5-5, a stark improvement from 1-6 in the spring season. The Giants entered the week holding the eighth spot in the latest Virginia High School League Power Ratings, and while it is currently unclear whether they will hold that spot or bump up to seventh, they will be in the playoffs for the first time since the 2017-18 season.

“It feels awesome,” Jones said. “It feels great to be a part of a good team. Coach Jarvis has a very good program here. It’s great to be back.”

The opportunistic Gladiators ensured their quest for a sixth-straight Class 1 football championship trophy after pounding the Essex Trojans in the state semifinals Saturday.

GREENVILLE—The Riverheads Gladiators will line up against a familiar opponent Saturday afternoon in the Class 1 state semifinals.

High school football on a Saturday afternoon in December can mean only one thing in Virginia. Your team has advanced to the state playoffs.

Jaqaunte "Bucky" Scott and Jonathan Moore each had 12 in the victory.

Grace Christian’s boys and girls basketball teams picked up victories Friday night in the tip-off tournament hosted by the Warriors.

Wilson Memorial outscored Monticello 25-14 in the fourth quarter Tuesday night as the Green Hornets rallied for a season-opening victory.

Turner Ashby jumped out to a 15-1 lead after one quarter Thursday evening and the Knights went on to defeat Fort Defiance.

Despite returning only three players with varsity experience, the Bison’s chances of competing for a Shenandoah District championship and a postseason run in Class 1 is possible.

Buffalo Gap’s girls basketball team is going to have to find scoring and rebounding from a lot of different places for the 2021-22 season to be successful.

Ryan Barbour gains yardage for the Little Giants on Friday against Broadway in Waynesboro.