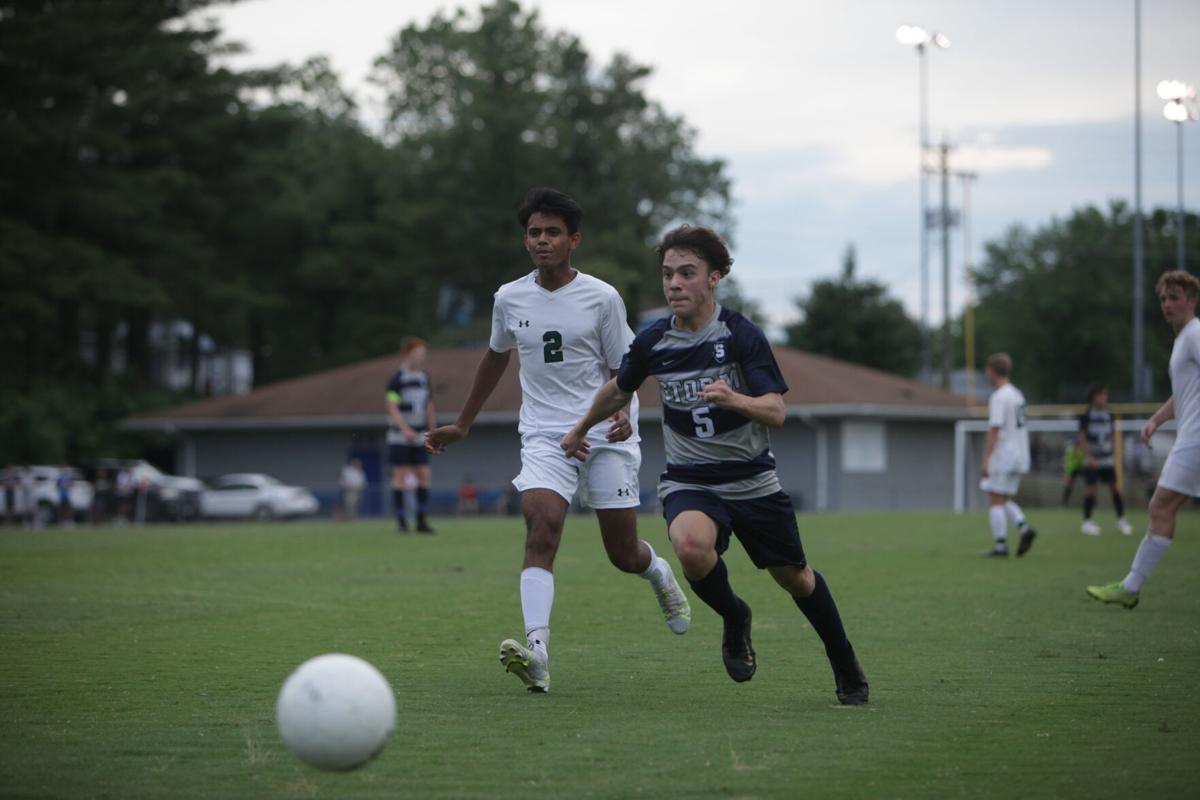 Senior Phillip Carter (5) dribbles upfield during a game against Wilson Memorial on Monday in Staunton. 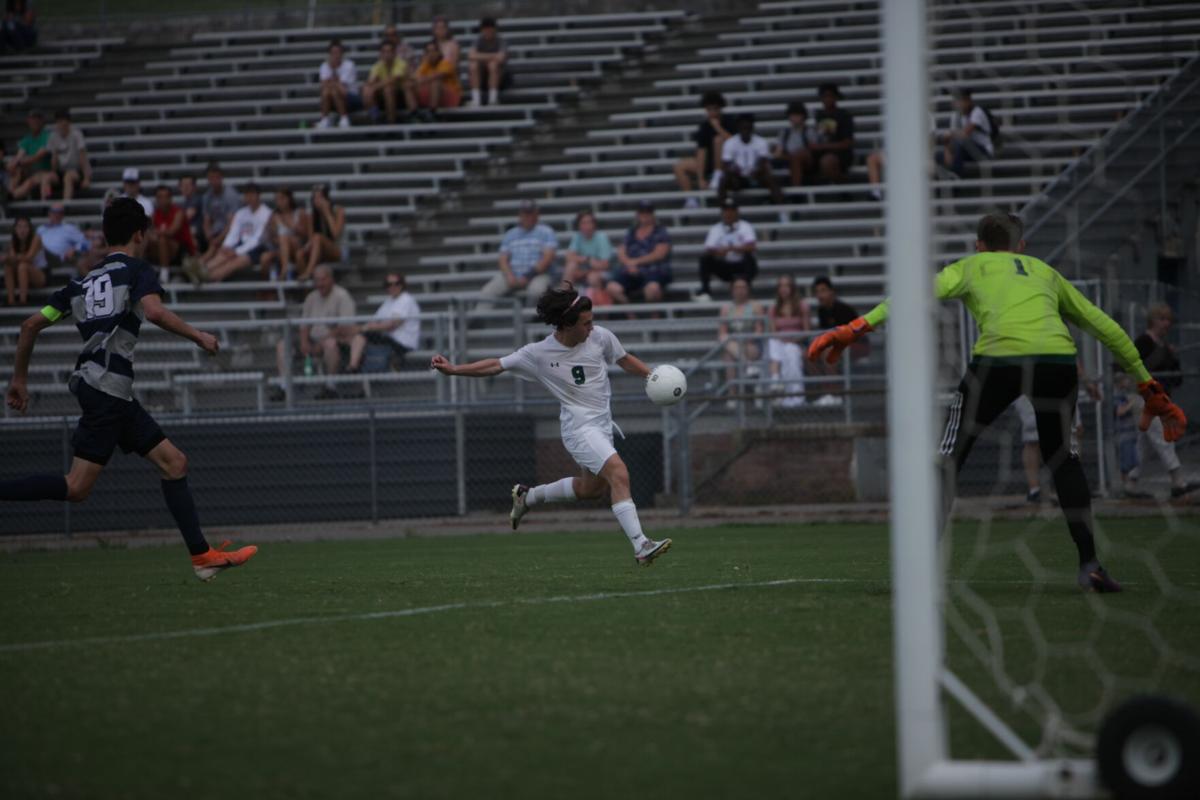 Wilson Memorial junior Brad LaGrua winds up for a shot during a game against Staunton on Monday. LaGrua scored the game-winning goal. 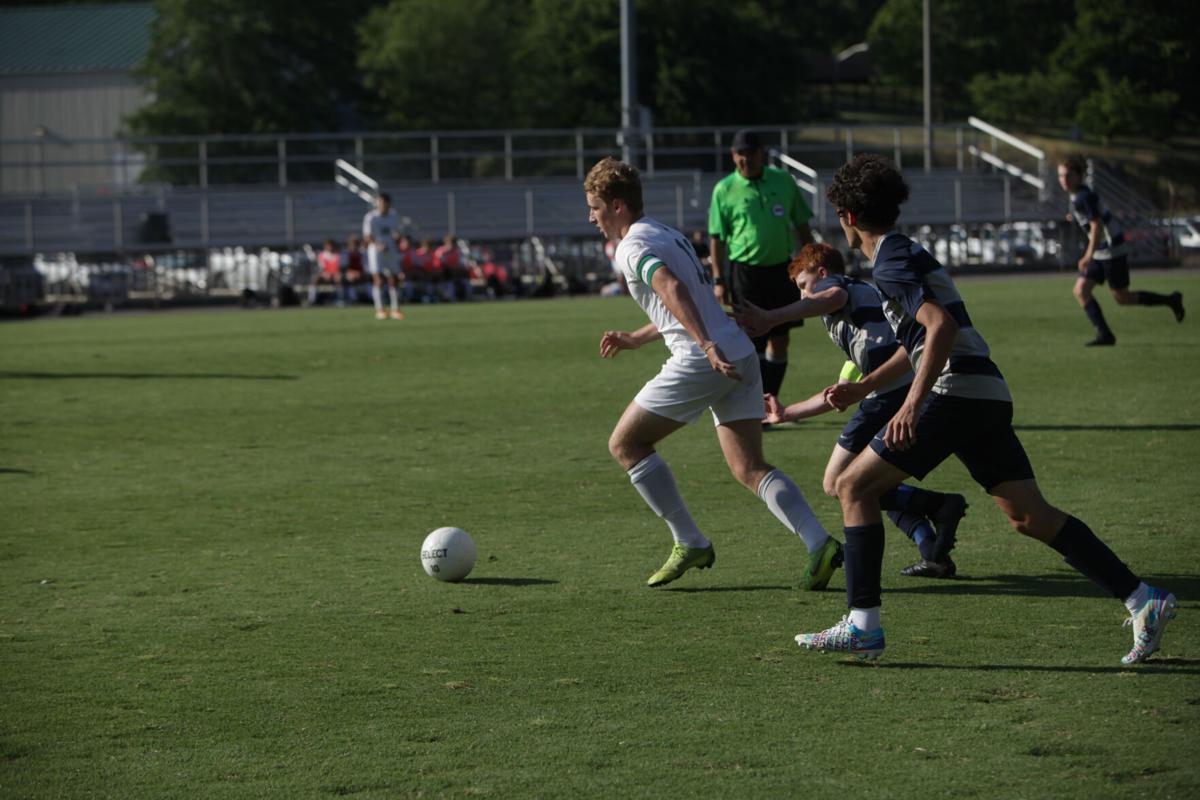 Wilson Memorial senior Mitchell Miller runs in front of the defense during a game against Staunton on Monday.

When the Hornet junior got an opportunity for redemption, he made sure it didn’t happen again.

“I can only assume that Collin Pelina sent me through, or maybe it was Phillip Carter,” LaGrua said. “I chopped them back, dribbled again and slotted it through the goalkeeper’s legs. It feels good.”

The first matchup between the two teams — the class of the Shenandoah District all season long, ended in a 2-2 tie after playing double overtime.

“Staunton’s a good team, as you can tell,” Wilson coach Scott Harrison said. “I have great respect for the boys over there (Staunton). They just keep coming at us and coming at us.”

Staunton took a 1-0 lead in the first half when Charles Otteni scored on a free kick.

“We’ve been practicing that in practice, so I just stepped up and was confident,” Otteni said. “I saw the wall at the near post, so I thought I could curve it around.”

Wilson responded with 1:41 remaining in the first half, when LaGrua scored on a header. The two teams went into halftime deadlocked at 1-1.

“We got fouled in the far corner of the field, so we all just hustled in the box,” LaGrua said. “ You’re not really aiming on a play like that.”

Staunton came out the aggressor in the second half, playing the first 20 minutes after intermission on Wilson’s side of the field. The Storm had several solid shots on goal, including one that pinged off of the post.

However, Staunton’s thin roster proved to be problematic down the stretch as Wilson played the final 20 minutes of the contest primarily on Staunton’s side of the field. Harrison also shifted from a 4-4-2 formation to a 3-5-2 formation, and that allowed the Hornets to match up better down the stretch.

The contest appeared to be heading into overtime for a second time this season as LaGrua’s shot on goal also hit post late in the contest.

However, he was able to score the game-winner minutes after his near goal.

“We played of a heck of a game, and they played a great game,” Staunton coach Holmes Tehrani said. “It was a district finals type of atmosphere. We had multiple shots. We outshot them. We just couldn’t put the ball in the net. It was a great game. There’s no feeling bad about the loss. An opportunity slipped away. I’m glad we lost today and not the next game. It’s a new season now.”

There was not a junior varsity contest Monday night.

Kate Alger pitched a complete-game shutout that featured 131 pitches, giving up three hits and four walks with 14 strikeouts as second-seeded Buffalo Gap pulled off a 2-0 upset of top-seeded Page County.

Riverheads will have to wait another year in a bid to win its third state championship in baseball.

Mike Gale will be the new girls basketball coach at Fort Defiance, which is closer to his home in Verona.

Riverheads pounded out 20 hits and scored nearly the same number of runs Thursday night as the Gladiators clobbered the Central Lunenburg Chargers.

Senior Phillip Carter (5) dribbles upfield during a game against Wilson Memorial on Monday in Staunton.

Wilson Memorial junior Brad LaGrua winds up for a shot during a game against Staunton on Monday. LaGrua scored the game-winning goal.

Wilson Memorial senior Mitchell Miller runs in front of the defense during a game against Staunton on Monday.