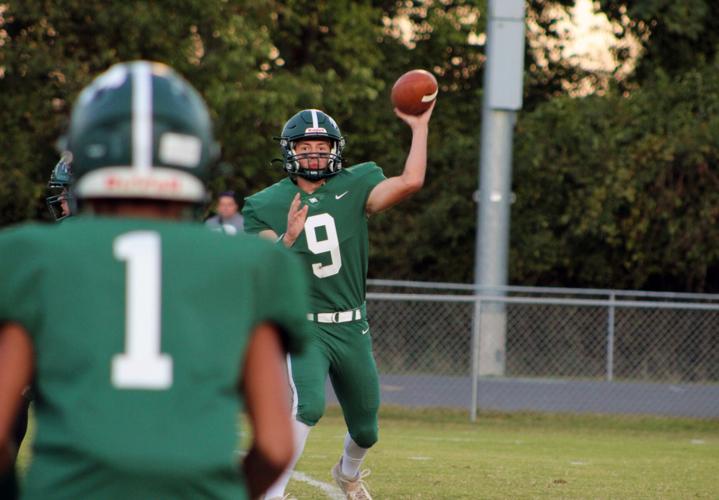 Wilson Memorial quarterback Aiden Podgorski makes a pass to Isaiah Scott on Friday during a game against Spotswood in Fishersville. 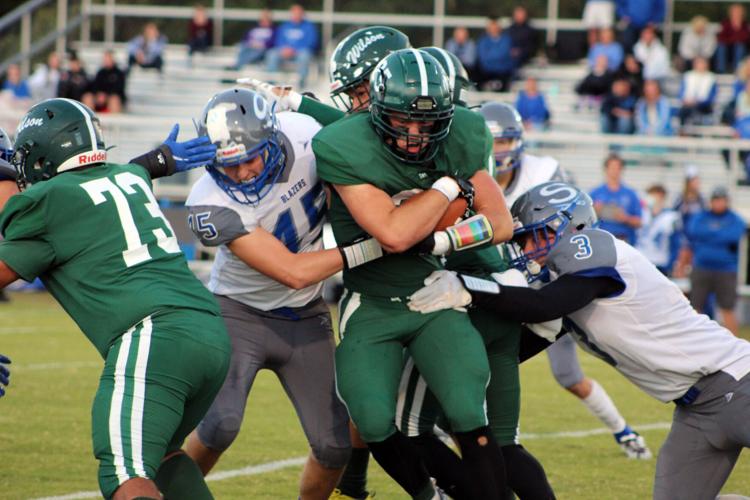 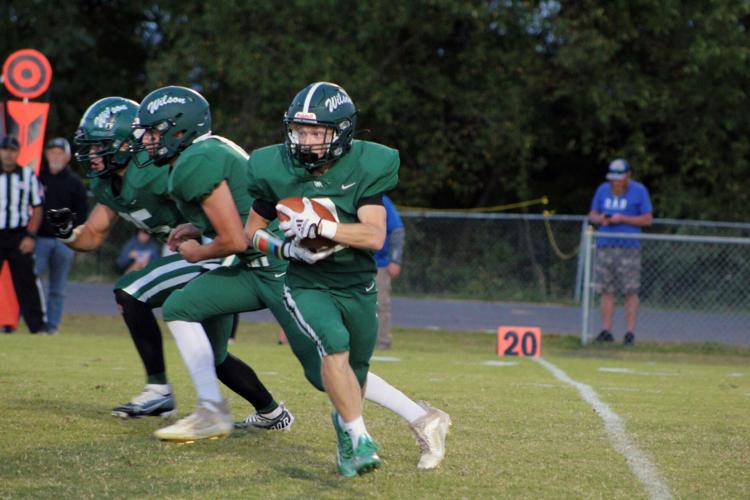 Brayden Tyree carries the ball for the Green Hornets on Friday against Spotswood in Fisherville.

STEVE COX For The News Virginian

The Spotswood defense set the tone early in the game with two big stops, leading to 14 points.

On the first series of the game, Wilson elected to go for the first down on fourth and-4 at its own 41. Aiden Podgorski’s pass was knocked down at the line of scrimmage, giving Spotswood the ball in Wilson territory.

The Blazers took advantage of the field position and scored on a 7-yard pass from Elliott Brown to Rayne Dean for a quick 7-0 lead.

Wilson took the ball into Spotswood territory on its next possession before a fumble gave the Blazers the football on the Spotswood 42. The Brown-to-Dean connection clicked again, this time for a 34-yard gain to the Wilson 24.

Wilson had a chance to get off the field on a fourth down and six play, but Brown found Aiden Grefe for 14 yards and a first down at the Hornets 4. Two plays later, Matthew Craig scored from 1 yard out, pushing the lead to 14-0.

“Watching Wilson on film, the thing that stood out is they didn’t beat themselves,” Spotswood coach Dale Shifflett said. “They didn’t commit penalties and they didn’t turn the ball over. To get that fourth down stop and then come away with a turnover swung the momentum in our favor early.”

The Hornets stopped Spotswood on its next possession midway through the second quarter, but a roughing the punter penalty kept the Spotswood offense on the field. William Stowe then broke loose on a 46-yard scoring run, giving the Blazers a 21-0 lead at the half.

Spotswood took the second half kickoff and the offense went for the jugular on the first play. Brown dropped back and found Grefe all alone behind the defense for a 75-yard scoring strike and a 28-0 Blzwers’ advantage.

“We were fired up coming out of the locker room. We wanted to punch them in the mouth, hit the big play,” Brown said.

“We actually ran the play in the first half and we didn’t get the right read. It’s a played we worked on in practice and one we thought could be open. We wanted to stay aggressive and Elliott threw a great ball,” Shifflett said.

After Spotswood picked off a Wilson pass, the Blazers again moved deep into Wilson territory. This time the Hornets’ defense stopped Spotswood on downs at the 25-yard line and the stop breathed life into the Wilson offense.

Spotswood answered after a 40-yard kickoff return by Grefe set the offense in notion at the Wilson 42. Craig capped the short drive with a 7-yard run, making the score 35-7.

Wilson batted back with two fourth quarter scorers. On the first play of the final quarter, Tyree capped a 72-yard drive with a 2-yard run, making the score 35-14.

The Hornets’ defense stopped Spotswood without a first down on two straight possessions and Wilson scored midway through the quarter to make things interesting.

Starting at midfield, two running plays netted just 3 yards for the Hornets. On third down, Podgorski lofted a long pass for Blake Rodgers and the Wilson receiver went up and pulled the pass in against double coverage for a 33-yard gain to the Spotswood 16. Mundie scored on a 7-yard run, pulling Wilson to within 35-21 with 5:25 left to play.

Spotswood put the game away when Stowe cut back against the grain and rumbled 54 yards for a touchdown, making the final 42-21.

The Blazers displayed a balanced offense with Brown completing 10-of-15 passes for 178 yards while Stowe led the ground attack with 150 yards on 21 carries.

“”in the past, when we’ve been successful here at Spotswood we’ve been balanced on offense,” Shifflett said. “It makes us harder to defend. We get a lot of guys involved and it’s a fun offense to play.”

The loss was the first of the year for the Hornets, now, 3-1 this season. Wilson hosts Western Albemarle in non-district play next Friday.

The Riverheads Gladiators kept their quest for another state football title moving forward.

Riverheads will host the regional title game next Friday, and the Gladiators won't have the best record on the field.

"They need to hold their heads high and be proud of what they accomplished," Stuarts Draft head coach Nathan Floyd said.

“We were talking in the locker room before about how we’ve made a legacy, no matter what happens,” senior Baylee Blalock said.

Don’t look now, but Fort Defiance is playing its best volleyball of the season in November.

Buffalo Gap will take the long ride to Lunenburg to face the Chargers next week.

The Little Giants had five runners finish in the top 20 en route to narrowly winning the Region 3C crown on Tuesday at Pleasant Grove Park in Fluvanna County.

RICHMOND — The Stuarts Draft competition cheer team continued to build the legend of their dynasty on Saturday.

Who has scored the most World Cup goals of all time?

Who has scored the most World Cup goals of all time?

Some prep coaches opt to pray, while others punt

Some prep coaches opt to pray, while others punt

Wilson Memorial quarterback Aiden Podgorski makes a pass to Isaiah Scott on Friday during a game against Spotswood in Fishersville.

Brayden Tyree carries the ball for the Green Hornets on Friday against Spotswood in Fisherville.