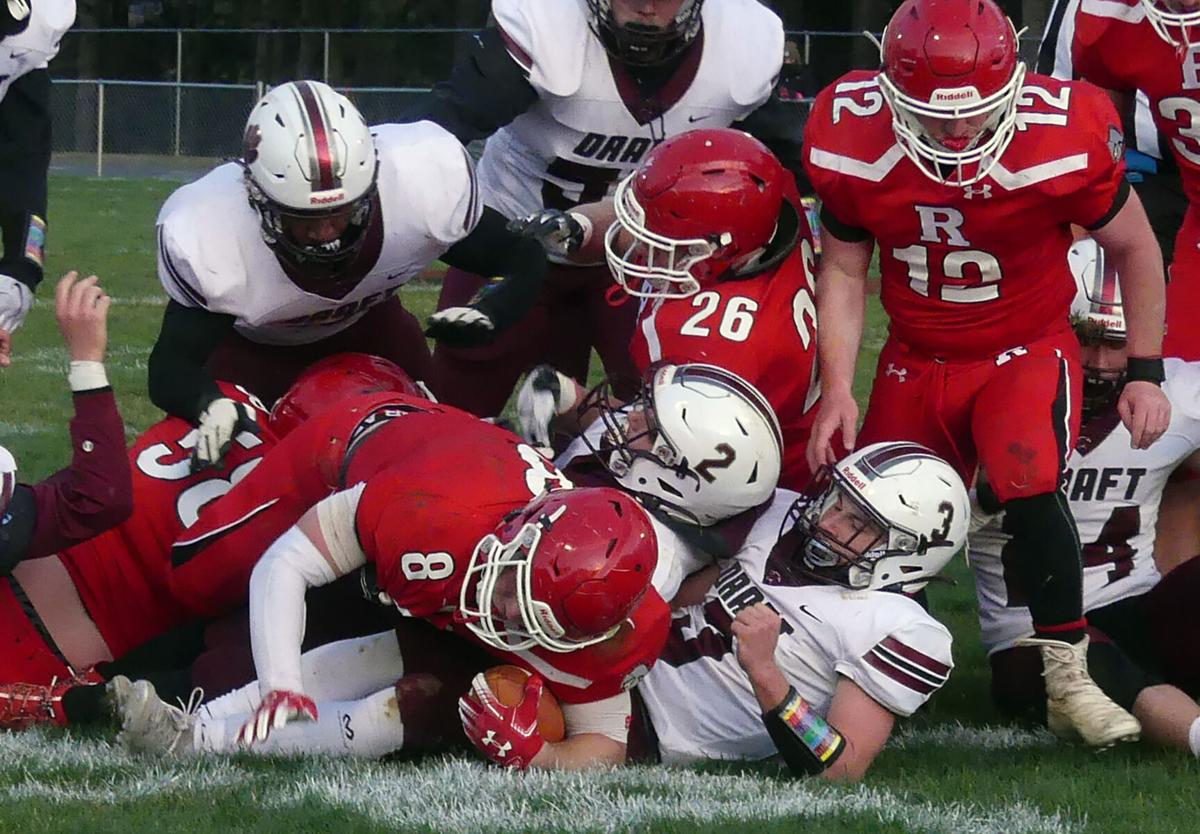 Thursday night’s cross-county rivalry was fought in the trenches as is evident here as Riverheads’ Zach Smiley battled for a few inches of ground against a stingy Cougar defense. 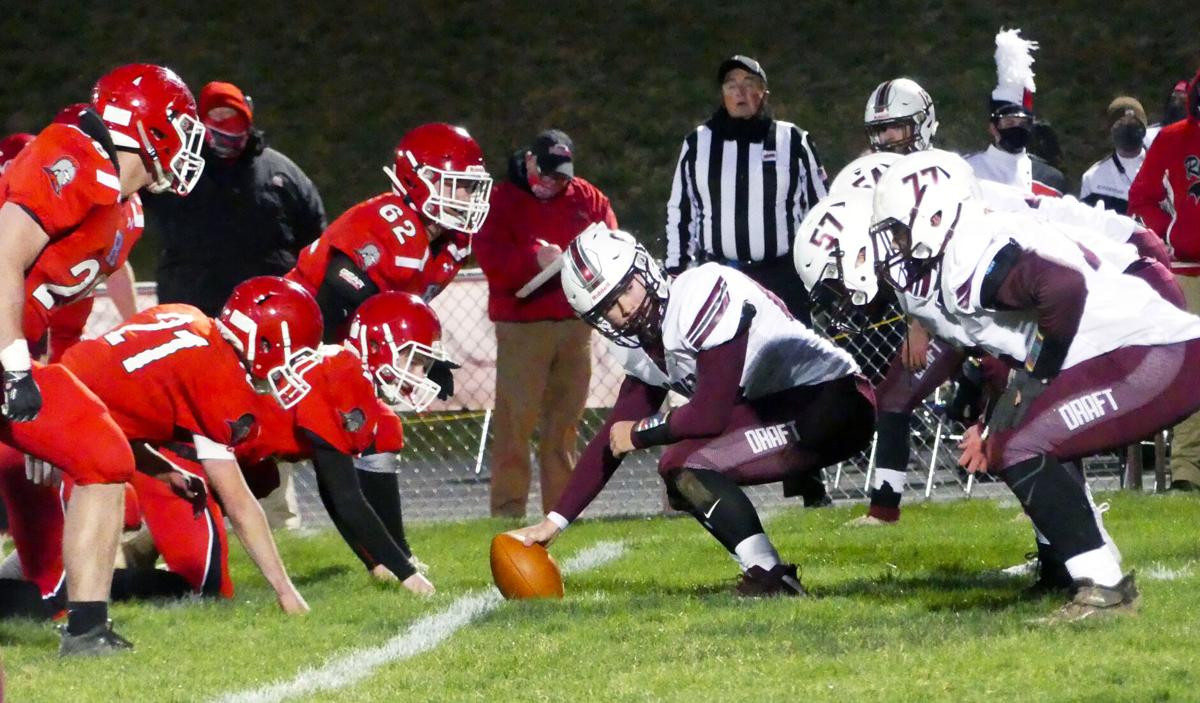 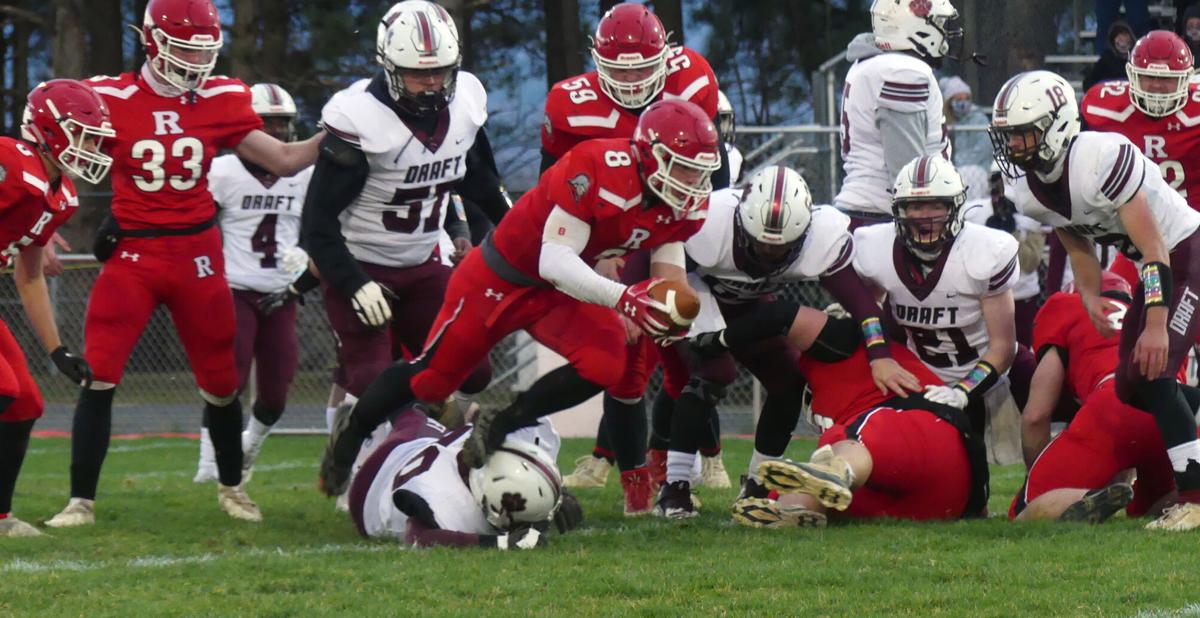 Riverheads’ Zach Smiley picks up a fumbled ball and moves forward with it Thursday night in first-half action against Stuarts Draft.

Steve Cox For The News Virginian

GREENVILLE — The battle of the county’s undefeated teams lived up to the hype Thursday evening.

The Riverheads defense made the crucial stop, Cooper Robson made the winning kick and Riverheads escaped with a 10-7 overtime victory over county rival Stuarts Draft in the final game of the regular season.

“Our kids are gritty, Our program’s gritty. Our kids expect to win,” said Riverheads head coach Robert Casto. “Stuarts Draft, that’s a really good football team. Hey, I’m proud of our kids. As a coach, all you can ask is for your kids to lay it on the line and our kids idd that tonight. That game could have gone the other way, but our kids made some big plays when they had to.”

Draft took the lead late in the opening quarter after a huge play by the Cougars’ special teams. Punter Bryce Dennison pinned the Gladiators deep in their end of the field with a punt that rolled out of bounds at the 1-yard line.

The Draft defense stopped Riverheads on three plays and the Cougars regained possession at the Riverheads 38 after a 31-yard punt.

After a 3-yard pickup by Blake Roach, Cobey Rothgeb took a handoff, cut back against the grain and raced 35 yards to the end zone to put Draft on the board. Dennison added the PAT for a 7-0 lead with 1:19 left in the first quarter.

The Draft defense that allowed just one touchdown in its first five games was as good as advertised. The Cougars held the high-powered Riverheads rushing attack to just 39 yards and one first down in the first half and Draft went to the locker room with the 7-0 lead.

Not to be outdone, the Riverheads defense was just as dominant. Following the Draft first-quarter touchdown , the Gladiators allowed just 36 yards the rest of the game.

Riverheads scored the tying touchdown early in the final quarter on a 60-yard drive that started in the third period.

The Gladiators moved to the Draft 35-yard line behind the running of Zach Smiley and Cayden Cook-Cash. Cole Burton gained 9-yards up the middle and Bennett Dunlap added 4 yards on a quarterback keeper to pick up a first-down at the Draft 20. Penalties then plagued the Draft as a personal foul gave Riverheads a first-and-goal at the 10. An offsides penalty, followed by an unsportsmanlike conduct penalty put the ball just inside the 3. From there, Smiley found the end zone and Robson added the PAT, tying the score at 7-7 with 11:42 left in the game.

Draft recovered a short kicoff to start its next drive on its 47-yard line, but the Cougars were unable to move the chains. Dennison again pinned the Gladiators deep as his punt rolled dead at the Riverheads 6-yard line.

After Burton lost a yard on Riverheads’ first play, Riverheads got out of the hole when Cook-Cash broke loose for a 40-yard gain to the Gladiators’ 45. The drive stalled, but the run flipped field position and this time Riverheads pinned the Cougars deep with a punt to the Draft 16.

The Riverheads defense kept Draft bottled up and forced a punt that Smiley fair caught at the Cougars’ 38. Cy Cox gained 9 yards to the 29 and Cook-Cash riipped off a big gain for an apparent first down near the 10-yard line, but the run was wiped out by a holding penalty and on the next play Riverheads fumbled the ball away at the Draft 32.

Each team had one possession in the final four minutes of regulation, but niether offense could move the chains as the teams headed to overtime tied at 7-7.

Riverheads won the toss and elected to play defense to start the extra session. Starting at the Riverheads 10, Rothgeb gained 3 yards to the 7 before an incomplete pass left the Cougars facing third down. Aaron Nice gained 4 yards and on fourth down from the 3, the Cougars elected to go for the touchdown. Rothgeb was hit for a loss as Riverheads kept the Cougars off the scoreboard on the first series.

Smiley scored on the first Riverheads play, but the TD was negated by an illegal shift penalty that moved the ball back to the 15. Smiley then picked up 4 yards and Dunlap followed with 7 yards on a keeper to move the ball to the 4. Smiley was stuffed for a 1-yard gain on third down, but the carry put the ball in the middle of the field for a potential game-winning field goal. Robson put the 20-yard kick through the uprights, giving Riverheads the hard-fought 10-7 win.

The field goal was the first of the season for Robson.

“I told Cooper early on that he might find himself in a positon where he could be the hero or he could be the goat,” Casto said. “He trotted out there and put it through the uprights.”

“I can’s say enough about the job Coach (Ray) Norcross and our defensive coaches did getting our kids ready to play,” Casto said. “That’s why it’s a team game and tonight our defense bailed us out.”

The two marquee backs were held in check. Riverheads’ Smiley gained 47 yards on 21 carries while Draft’s Nice picked up 60 yards on 24 carries.

“There were times tonight where I thought our backs had some big holes but Draft’s No. 16 (Latrell Fornby) brought us down from behind before we could get to the hole. That kid’s a heck of a football player. We knew he was good, but he was a little quicker than we expected,” said Casto

“On offense, we made some adjustments, we had to make some, and I thought we moved the ball pretty well in the second half, but we kept shooting ourselves in the foot,” Casto continued. “We would have had a first down around the 10 but we got called for a holding penalty and then we turned it over. And we had another penalty in overtime that called back a touchdown. Turnovers are part of the game and they’re going to happen at times, but the mental mistakes, we’ll need to clean those up as we move into the playoffs.”

Both teams will move on to the playoffs and both will host a game next week to start regional play.

Thursday night’s cross-county rivalry was fought in the trenches as is evident here as Riverheads’ Zach Smiley battled for a few inches of ground against a stingy Cougar defense.

Riverheads’ Zach Smiley picks up a fumbled ball and moves forward with it Thursday night in first-half action against Stuarts Draft.