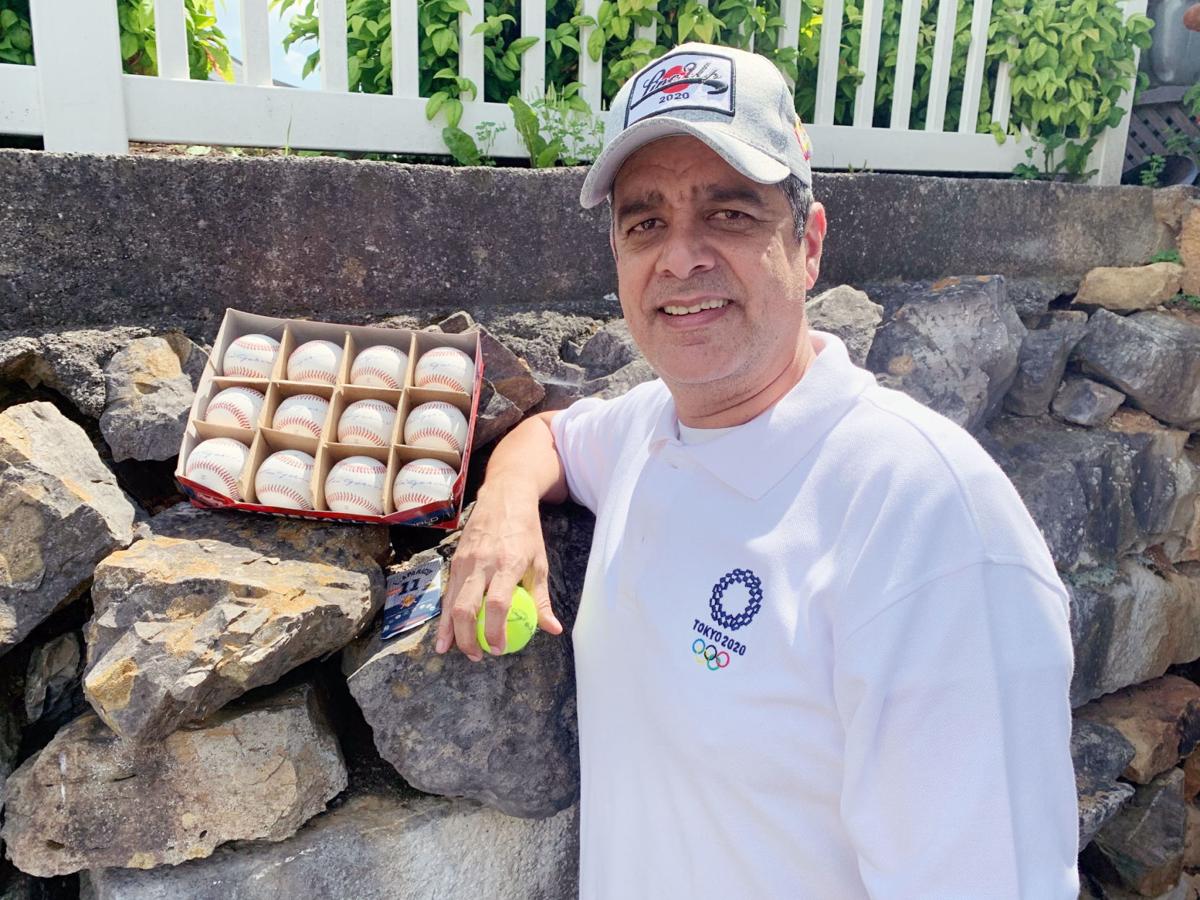 Michael Perez of Staunton poses with his collection of baseballs signed by sports stars and celebrities. 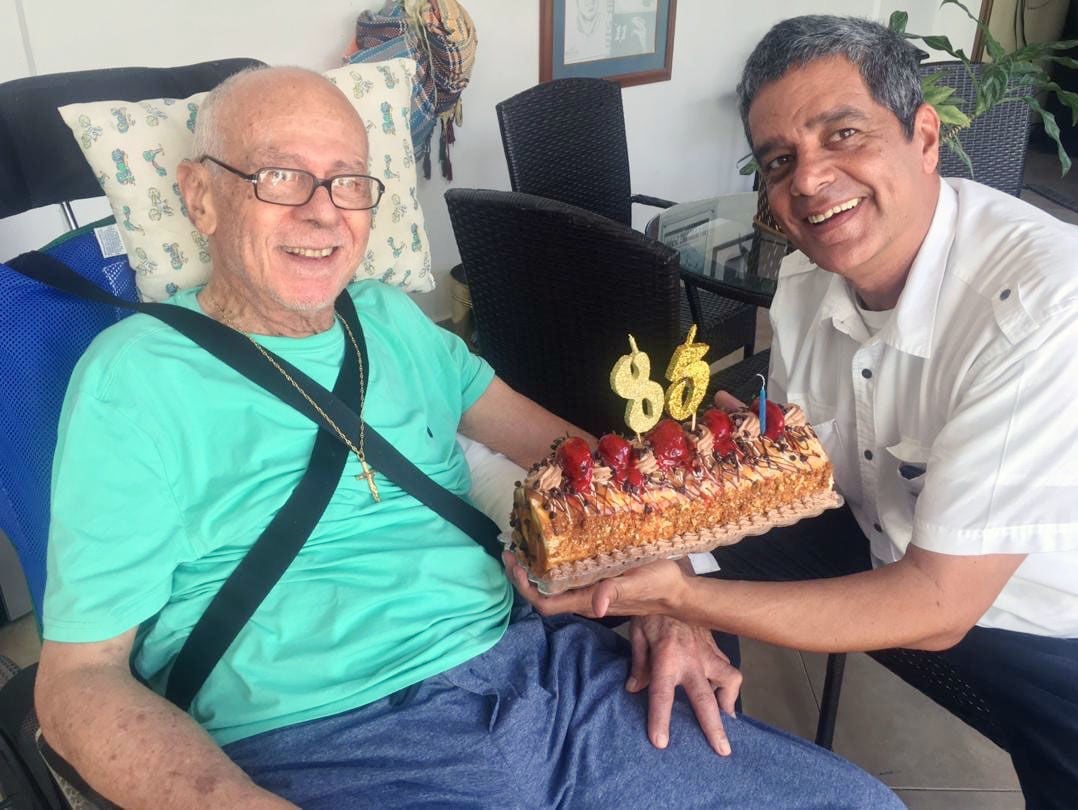 Michael Perez (right) celebrates the 85th birthday of Hall of Famer Luis Aparicio in April 2019. Aparicio was the first player from Venezuela to be inducted into the National Baseball Hall of Fame. 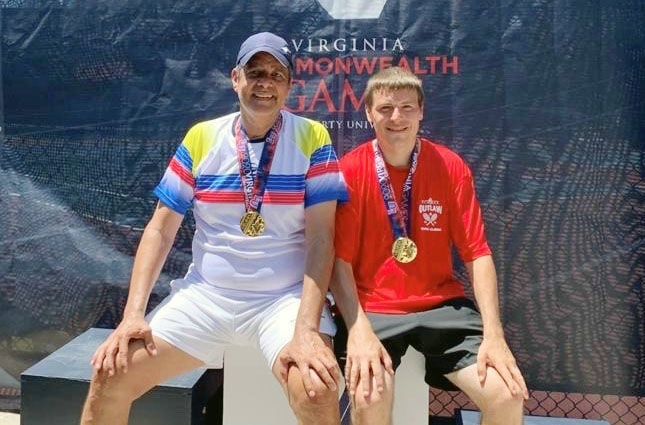 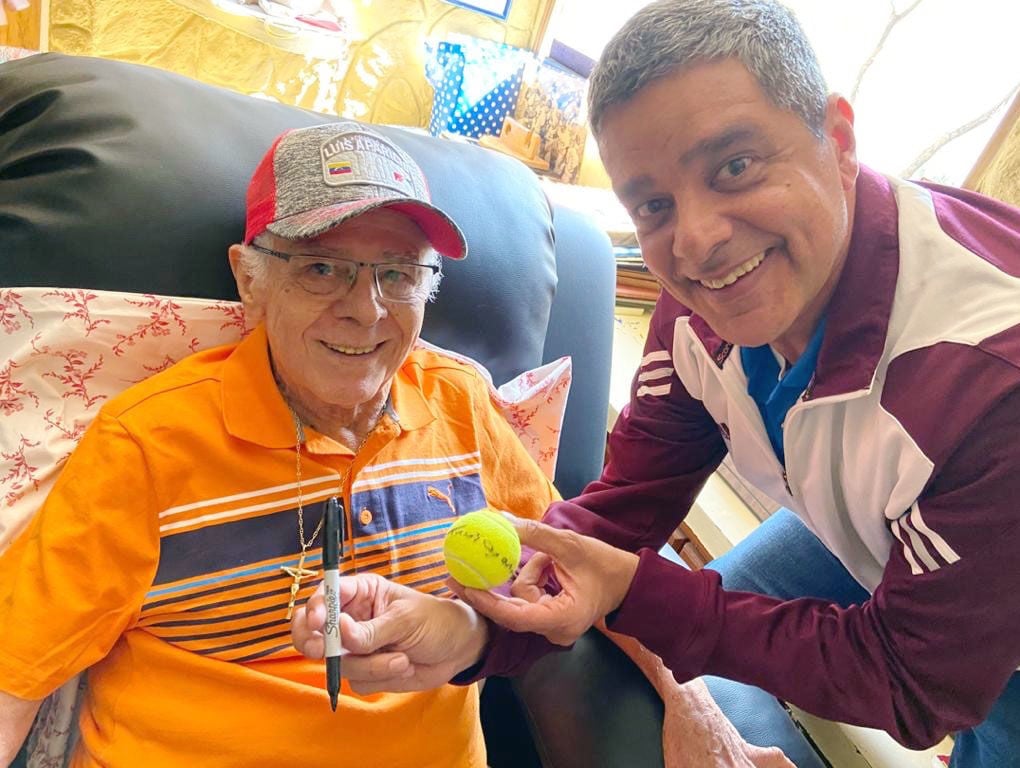 STAUNTON — Even during the pandemic, Staunton resident and Venezuelan native Michael Perez is making the most of the situation.

In March, Perez was planning to return to Venezuela, right at the time COVID-19 shut down the airlines.

Recently, Perez teamed up with John Hereford of Kingsport, Tennessee, to win the men’s open doubles tennis tournament at the Commonwealth Games held in Lynchburg.

Perez and Hereford defeated a pair of college players from Lynchburg, 7-6, 3-6, 10-8, despite being older.

“We had a good time and it was some good tennis,” Perez said. “It was really an exciting match.”

Perez had met Hereford several years ago when the two were playing in a singles match.

“It was very difficult, but we pulled it out,” Hereford said, referring to their doubles victory in Lynchburg. “Michael definitely held his own.”

Perez, now 53, came to the states to play baseball at King College in Bristol.

“They really took care of me and helped me to get better,” Perez said.

With a major in business administration and a minor in economics, Perez returned to Venezuela to work for the baseball team where he had been a batboy.

“They told me I was more valuable to them in the office than on the field,” Perez said.

Beginning as a ticket agent, Perez performed many tasks for La Guaira (The Sharks), working his way up the corporate ladder.

“I did almost any job they could find for me,” Perez said.

Knowing English well, he was a natural to recruit American ballplayers to play in the Venezuelan winter league.

Later, he became the general manager for the team for three years.

Perez then formed his own company, LINEUP, which printed a series of trading cards, featuring in Spanish, all of the Latin American Major Leaguers.

He also entered into partnerships with other companies to promote Venezuelan athletes.

One deal was with Malta-Polar, a popular non-alcoholic beverage company. Perez and this sponsor initiated the Luis Aparicio Award, given to the best Venezuelan player in the big leagues. Johan Santana was the first recipient of this award in 2004.

“This recognition was as important or more to these athletes as an MVP award would be because they represented their country,” Perez said.

And so began a special relationship with Aparicio, the first Venezuelan to be inducted into the Baseball Hall of Fame.

Perez helped to put together the Venezuelan team for the first World Baseball Classic in 2006.

“That was a big deal,” Perez said. “It opened the door for the future.”

Perez continued to expand his contacts, promoting other Venezuelan athletes in not only baseball, but soccer, softball, tennis and other sports.

He was the producer of a television series, Off-Base, and in a segment called The Rookie, conducted Miguel Cabrera’s first TV interview when Cabrera broke into the big leagues with the Florida Marlins.

Later, when Cabrera was with the Tigers, he granted Perez another interview.

“He remembered the first interview,” Perez said. “He always has time for us.”

This time, Perez wanted to show viewers the personal side of Cabrera as a regular guy, not just a privileged superstar.

“We filmed him buying a ticket and riding the subway in Chicago to the ballpark,” Perez said. “He could’ve taken his own limo.”

In the game with the White Sox, Cabrera pounded out three hits and superstitiously said that he should take the subway again.

Perez has taken advantage of his relationships with his countrymen to interact with some of the most recognized and popular sports stars.

“Thanks to sports, I’ve been able to talk with them,” Perez said.

When Michael Jordan was coming through the White Sox organization in his effort to transition to baseball, the White Sox were being managed by Ozzie Guillen, another Venezuelan.

While hanging around with Guillen and the team, Perez followed Jordan into the restroom and persuaded Jordan to sign a couple of baseballs.

A huge collector of sports memorabilia, Perez arranged a trade of two Dave Concepcion autographed balls for a pair of LeBron James’ signed baseballs. Concepcion was another Venezuelan baseball great, who played shortstop for the Cincinnati Reds during the Big Red Machine era.

He acquired an autographed ball at a World Series game by John Grisham, his wife’s favorite author and picked up another signed ball from Garth Brooks, Donna’s favorite country singer.

Then, after Venezuelan Jhonattan Vegas won his first PGA tour event at the Bob Hope Classic, Perez decided to catch up with Vegas at his next event, the Farmers Insurance Open at Torrey Pines in San Diego. Vegas was the first Venezuelan to earn a win on tour.

As fortune would have it, Vegan was paired with Tiger Woods.

“So, I got to follow Tiger Woods and Vegas around for 18 holes,” Perez said.

After the round, Woods granted an interview, Off the Green, specifically to talk about Vegas, not himself. “He was very gracious and complimentary of Jhonattan,” Perez said.

“There were only four people there; him, his son, his wife and me,” Perez said. “I brought him the cake.”

The special bond between two countrymen has remained strong.

“I want to make sure that players like him are known to this generation,” Perez said.

Perez has also developed a lasting relationship with Omar Vizquel, the three-time All-Star and 11-time Gold Glove shortstop who played in 24 big league seasons and was a contemporary of Perez growing up in Caracas.

Perez attended Vizquel’s final game in the majors eight years ago in Toronto.

“He’s family, a brother and humble,” Perez said. “He’s one of the top humans in the world.”

Brandon Perez is a rising NCAA tennis player, having just transferred from Virginia Tech to Nebraska.

“When he stays with us, he insists on staying in Brandon’s room,” Perez said. “He leaves little notes for Brandon, encouraging him to put the work in, keep mentally tough, things like that.”

During his marketing career, Perez has traveled extensively around the globe. He’s attended the Olympic Games, the World Series, World Cup qualifiers and other renowned events.

He was a member of the Venezuelan delegation to the Pan Am Games in Lima, Peru.

Currently he has secured the rights to print trading cards for the Tokyo Olympics in 2021.

While not being able to get back to Venezuela has caused some obstacles, Perez has been able to conduct most of his business affairs remotely and being able to attend Brandon’s tennis matches here in the states has been a blessing.

The Perez’ other son, Brian, received a Bachelor’s and Master’s degree from James Madison University and currently resides in Silver Spring, MD.

But although Perez is thriving in the U.S., he is saddened by what has happened in Venezuela.

“It’s hard,” Perez said. “Venezuela is a beautiful country with mountains, rivers, beaches and everything. But it’s been controlled by the government for the last 15 years. Five people control the whole country.”

But in spite of what’s happened politically, Perez said that he would go back tomorrow if he could find a flight.

“I just wish we could have back half of what we had before,” Perez said. “I’ve seen the other way that Venezuela was. The new generation in leaving.”

The Stuarts Draft Diamondbacks' season ended Tuesday with a loss to visiting Broadway.

Broadway survived the upset in the opening game of RCBL playoffs on Sunday evening.

FISHERSVILLE — When Jeremy Hartman was thinking of candidates to join his boys basketball coaching staff at Wilson Memorial, one name kept com…

“Guys were going home, going to Myrtle Beach, coming back to campus, and we weren’t getting tested. ... One day I looked around, and we were like 100-deep in our indoor facility, no masks.”

Michael Freeman is the latest addition to the Green Hornets’ coaching staff as he will serve as the head coach in girls cross country, indoor track and girls outdoor track.

Michael Perez of Staunton poses with his collection of baseballs signed by sports stars and celebrities.

Michael Perez (right) celebrates the 85th birthday of Hall of Famer Luis Aparicio in April 2019. Aparicio was the first player from Venezuela to be inducted into the National Baseball Hall of Fame.