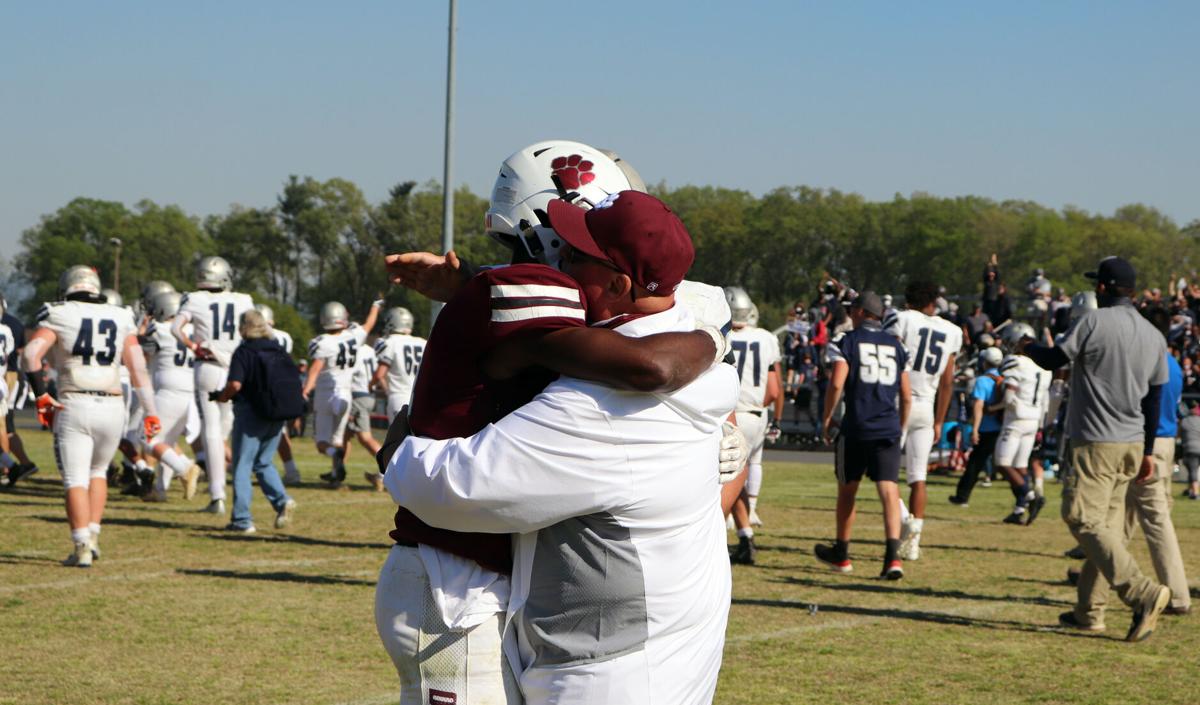 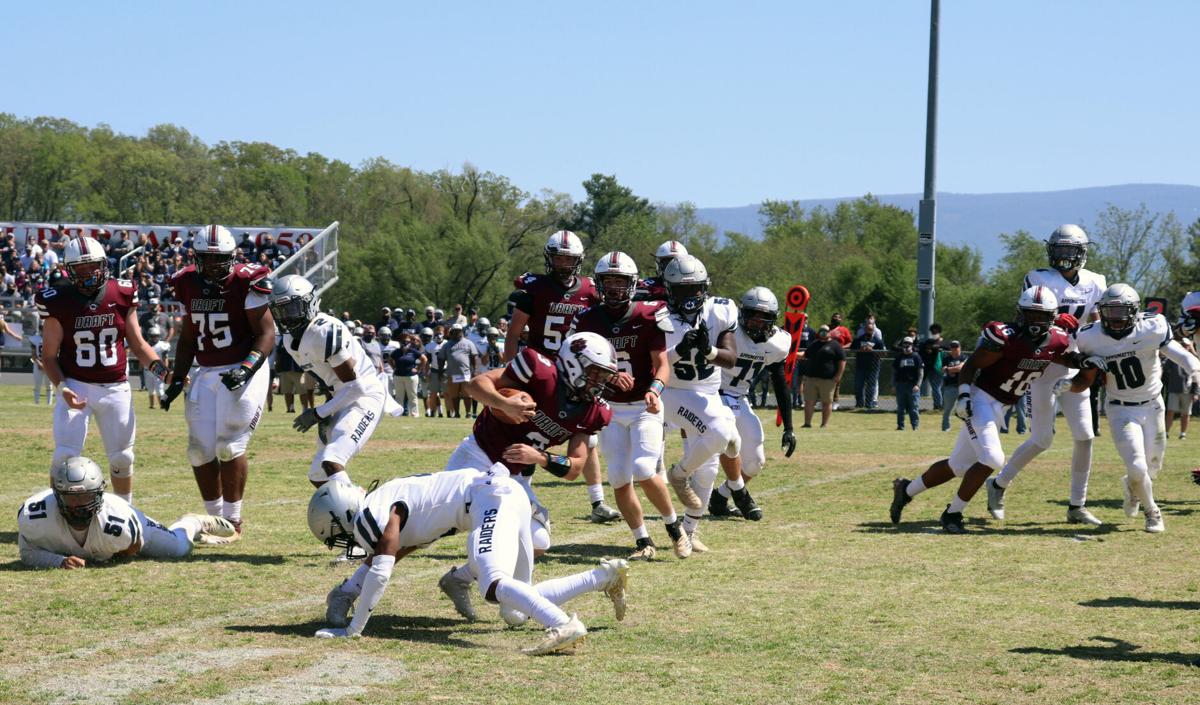 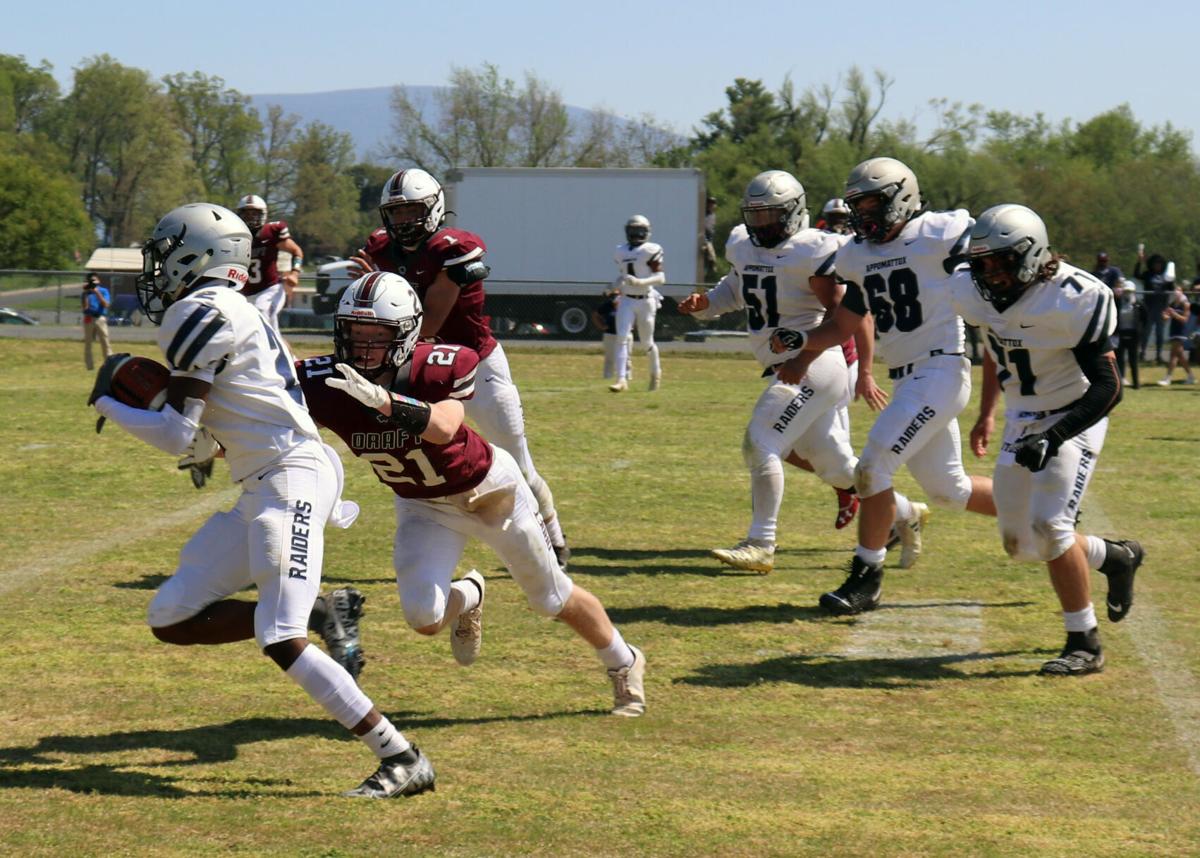 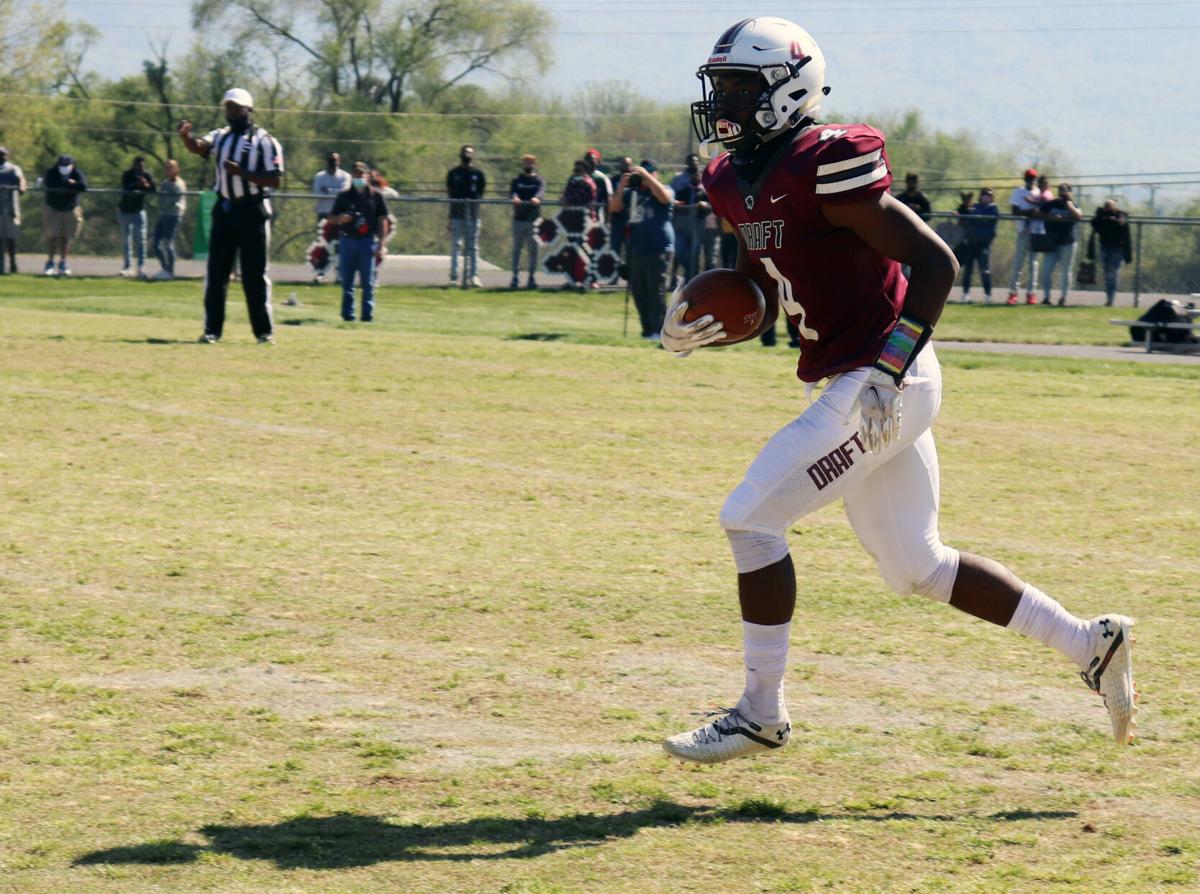 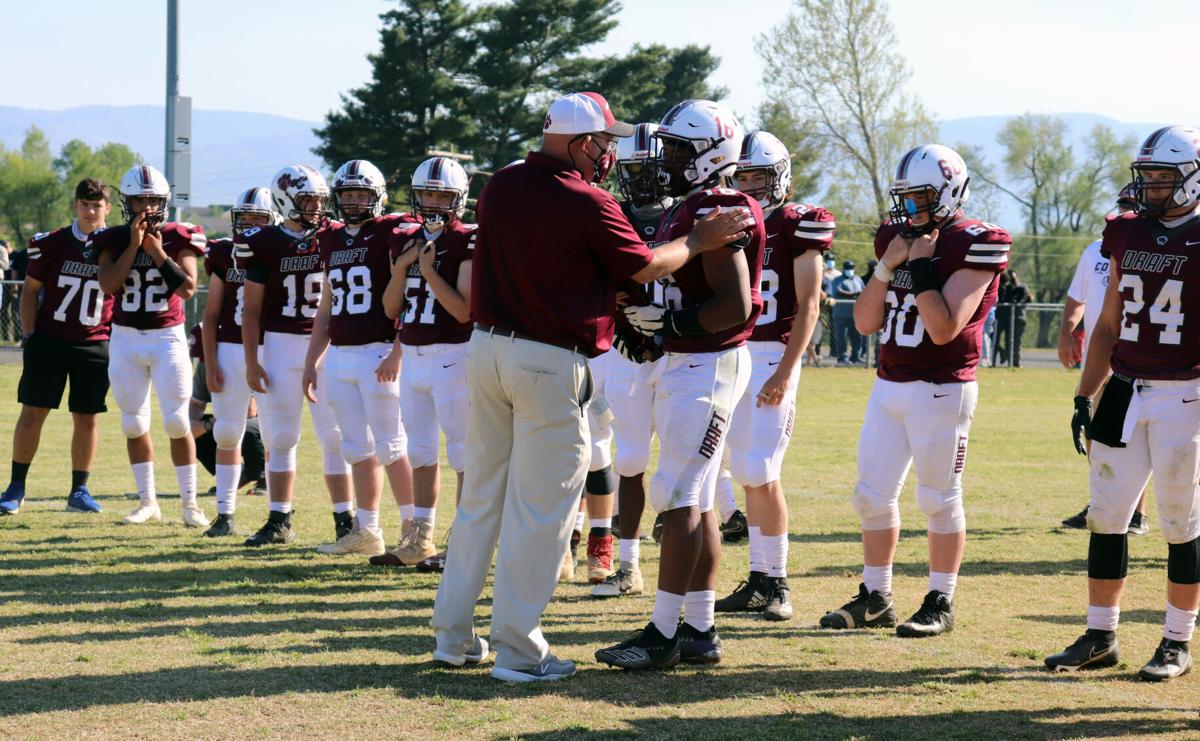 Bill Meade For the News Virginian

STUARTS DRAFT — The entertainment value of Saturday’s state Class 2 football championship was through the roof as Appomattox edged Stuarts Draft 48-41 to defend its title on Saturday at Cougar field.

In what could be described as one of the most exciting high school games in memory, the Raiders cashed in on several Cougar turnovers to hold off a fired-up Draft squad in a repeat of the 2019 final.

Down by 18 points in the second half, the Cougars clawed back into the contest and had the favored Raiders (10-0) on their heels before running out of time.

“They’re not quitters,” said Stuarts Draft head coach Nathan Floyd of his team. “They’re the most competitive I’ve been around and I’m super proud of this group.”

Appomattox, playing for head coach Doug Smith, who is battling cancer and was unable to make the trip, bolted out of the gate with two quick scores.

But the Cougars came to life early in the second period with a sustained running attack culminated in a four-yard TD run by senior Blake Roach, who gained more than 100 yards on the ground for the second straight game.

“He (Roach) is a patient runner,” Floyd said.

But the Raiders, who have dominated Class 2 in the state for six years, showed their championship pedigree.

Senior Keshawn Baker, a bruising 200-pound senior running back, took an option toss from quarterback Tre Lawing and broke tackles on a 41-yard run to the Draft 17.

The offensive line for the Cougars began to open up some huge holes for runners Roach, Cobey Rothgeb and Aaron Nice on the Cougars’ next possession, but the drive stalled on third down and the Cougars settled for a 27-yard field goal by freshman Bryce Dennison with 3:49 remaining in the half.

Two personal fouls by the Raiders helped Stuarts Draft score again before halftime when sophomore quarterback Fannon Vance connected with Roach for a 14-yard gain and then to senior Jo-’el Howard for a 15-yard TD with 39 ticks left on the clock. The two-point conversion fell incomplete.

The Cougars successfully completed an onside kick, but couldn’t score again before halftime.

Things got even crazier in the third quarter.

The Raiders recovered an onside kick to start the second half, which appeared to be touched by the kicking team before traveling the necessary 10 yards.

After two plays, Appomattox extended its lead to 28-16 with yet another big play.

Lawing completed a long pass to junior receiver Ervis Davin, who eluded a would-be Draft tackler and skipped into the end zone for a 46-yard score.

Howard then displayed his big-play ability, returning the next kickoff 75 yards, outrunning the fleet-footed Booker to the end zone. Dennison’s kick made it 28-23 with 9:58 left in the quarter.

After Dennison booted another kickoff out of the end zone, Appomattox struck again, this time on an 80-yard scamper by Lawing on the first play from scrimmage.

A fumble by the Cougars was scooped up by Pennix, who outraced the stunned Draft players for a 49-yard return for a 41-23 lead.

But after another personal foul penalty on the Raiders, the Cougars were on the march again.

Big defensive plays by the Cougars senior Latrell Fomby and junior Jayson Williams set up a punt block by the Cougars which was returned by senior Dustyn Fitzgerald to the Appomattox 15-yard line.

Three plays later, Fitzgerald scored from the Raiders’ three and Roach converted the two-point conversion run. Suddenly, the Cougars were right back in the game.

Appomattox was pinned deep in its own territory and were forced to punt.

Rothgeb made a fair catch at the Raiders’ 37-yard line and Nice burst up the middle untouched on a 36-yard scoring run to make it 41-38 with 42 seconds remaining in the third period.

The Cougars’ defense came through again, but senior punter Bronson Williams flipped the field with a 69-yard wind-aided boot which sent the Cougars’ back to their own 17.

The Raiders then produced yet another big play, as Booker pounced on a punt fumble in the end zone for a touchdown. The extra point gave the defending champs a 10-point cushion (48-38) with 8:23 left in the game.

Still, the Cougars had another opportunity as their offensive line continued to lead the way for another march downfield.

“Coach Mikell (Abe) does a great job with those guys on the offensive line and there were huge holes opened for us,” Floyd said. “It was one of their best games.”

The Cougar drive stalled at the Raiders’ 25, but there was still more drama left to unfold.

The Raiders tried to surprise the Draft with a pass play, but senior Ethan Cash leaped to snag a Lawing aerial. giving the Cougars great field possession at the Appomattox 17.

Stuarts Draft got as close as the five, before electing to send Dennison out on fourth down for a 25-yard field goal.

The ball split the uprights, drawing the Cougars back to within one touchdown at 48-41 with 2:44 still left on the game clock.

Then, in another stunning development, the upset-minded Cougars found themselves with the football again, after Dennison’s pooch kick was recovered by an alert Rothgeb at the Raiders 38 with plenty of time left.

Finally, the Raiders defense held on fourth down, and despite two timeouts by the Cougars, Appomattox was able to run out the rest of the time.

“This was a tough game to lose,” Floyd said. “They (Appomattox) just made one more play than us. It was a roller-coaster ride. I couldn’t catch my breath.”

In addition to all the turnovers, the two teams combined for 629 yards of offense in the shootout.

For the Cougars (9-2), Roach rushed for 108 yards on 23 carries, while Nice gained 83 yards and Rothgeb added 79 more. Vance completed half of his 12 passing attempts for 76 yards.

How may players on the Cubs will be traded before the deadline?

How the U.S. Women’s Soccer Team trained for Tokyo heat

How the U.S. Women’s Soccer Team trained for Tokyo heat

Shenandoah District football media day was held at Wilson Memorial High School on Wednesday, as players and coaches addressed the media to discuss the upcoming season.

The Virginia Tech tight end, an NFL prospect, is a naturally quiet young man who is learing to become a more vocal leader for younger teammates.

The Generals used a four-run seventh inning to fuel a 6-3 win over the Tom Sox on Sunday night that completed a two-game sweep.

With Simone Biles out, Russians win gymnastics gold over US

The Russian Olympic Committee has won the gold medal in women’s gymnastics after U.S. star Simone Biles exited with a medical issue.

FORT DEFIANCE — Do you dig volleyball? Are spiking and setting something that you would like to learn more about? Consider the one-day Fort De…

FISHERSVILLE — High school football will be back where it belongs when the teams return to play Friday nights this fall. Wednesday, six of the…

Simone Biles says she withdrew from final to protect team, self; plus more from Tokyo

Simone Biles says she withdrew from the Olympics gymnastics team final because she wasn't in the right headspace to compete. Here's the latest.

The Tokyo Olympics saw a full slate of action Saturday with a rebound U.S. women's soccer win and the first medals of the Games. Here's the latest.