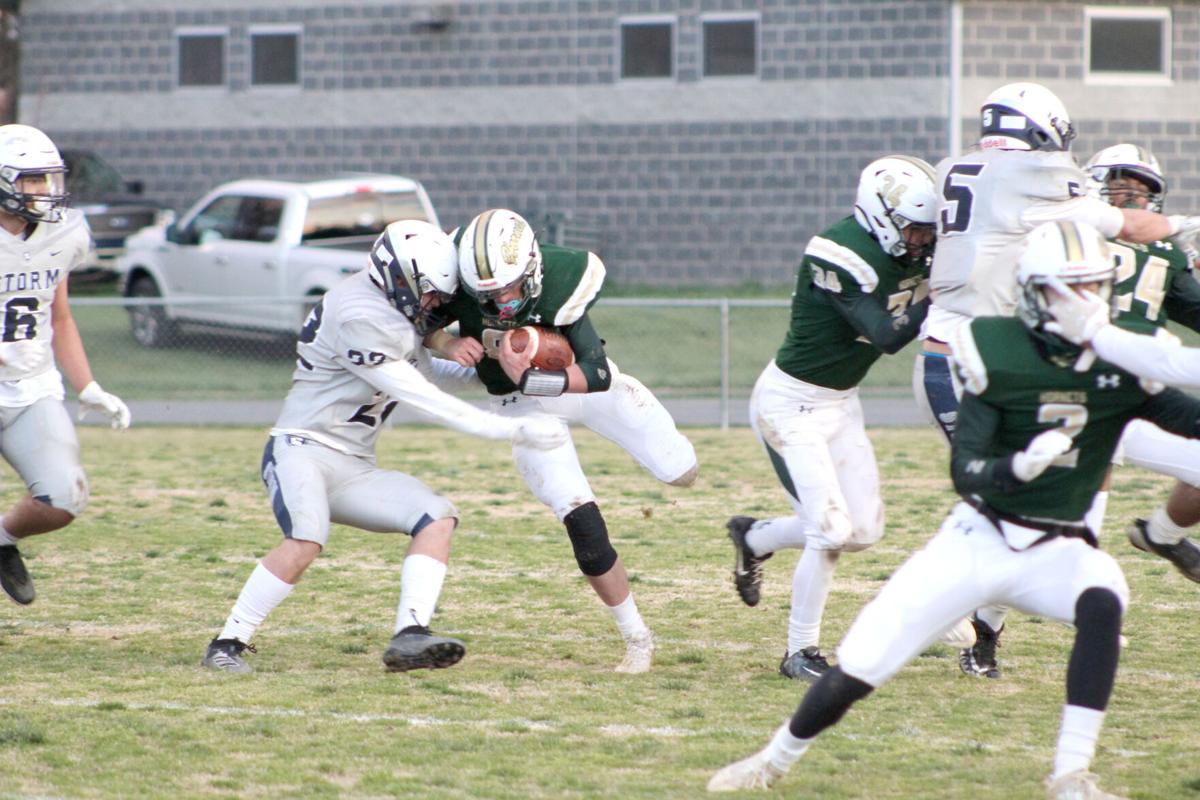 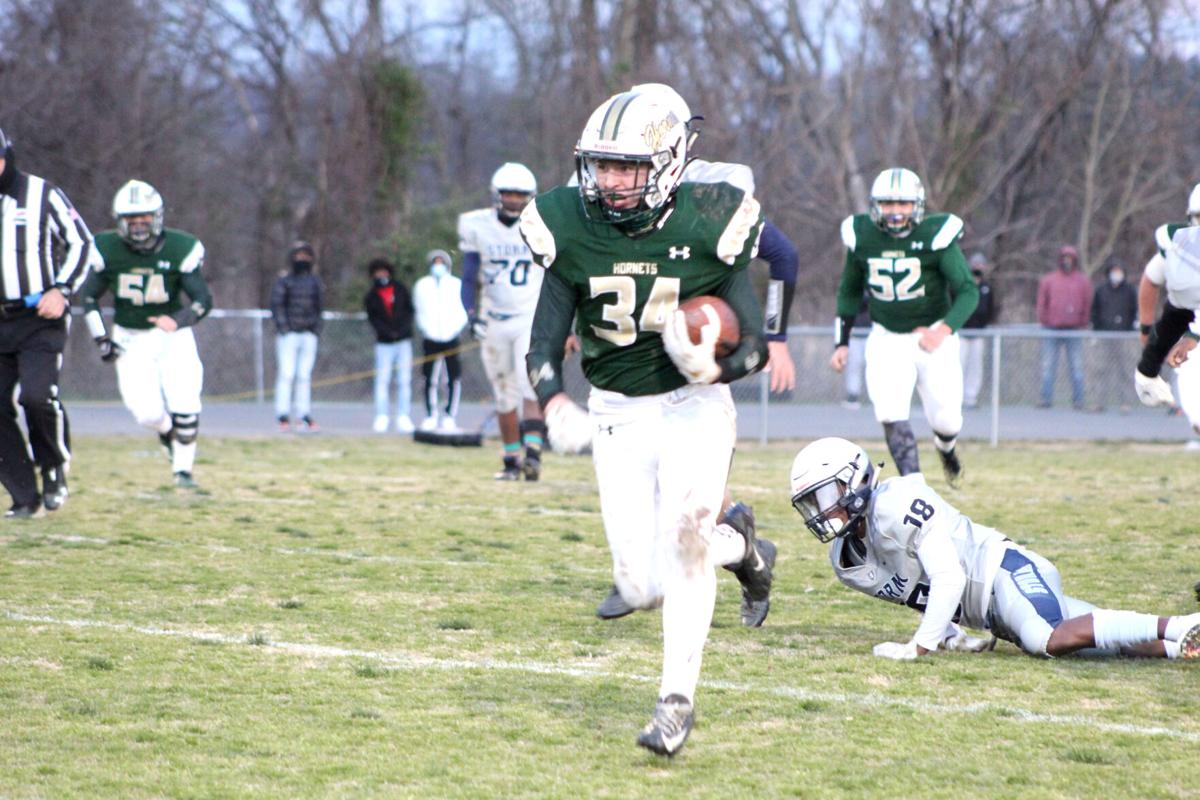 Wilson Memorial’s Noah Campbell carries the ball for the Green Hornets on Thursday against Staunton in Fishersville. 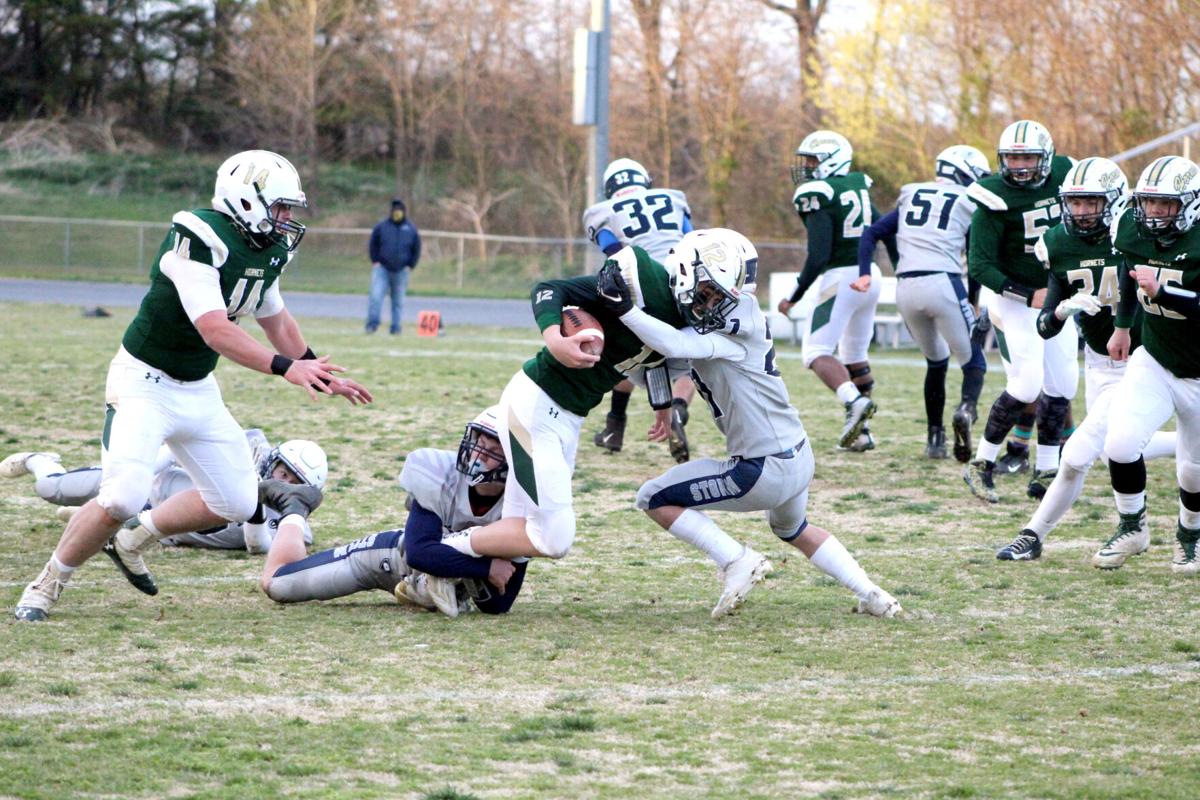 Wilson Memorial’s Derek Wakefield is taken down by Staunton defenders Thursday in Fishersville.

Bill Meade For The News Virginian

Clinging to a 14-6 halftime lead, the Green Hornets broke the game open in the third period and scored two more times in the fourth to win going away.

“Our seniors stepped up; we have a lot of leaders out there,” said Wilson Memorial first-year head coach Drew Bugden.

The Wilson defense remained stout all night, allowing just a single Staunton score near the end of the first half.

Wilson (4-2 overall and 3-2 in district) scored on its first offensive possession on an eight-yard run by senior Derek Wakefield and senior Henry Fosnocht added the extra point with 6:36 left in the first quarter.

Staunton’s Jerrod Mathews intercepted a pass by Wilson’s Trent Gruver as the Hornets attempted to strike paydirt again in the second quarter.

But late in the half, Wilson Memorial got the ball back and after hard-running junior Noah Campbell broke loose on a 59-yard scamper to the Staunton four, senior running back Maurice Johnson took the pigskin in the rest of the way. Fosnocht again split the uprights and the Hornets doubled their score to 14-0.

In just three plays, sophomore quarterback Walker Darby engineered a scoring drive with a five-yard pass to Rik’Avian Cartey, a 30-yard run by Kayden Jackson and a 40-yard scoring toss to Cartey with a minute and a half remaining before halftime. The extra point kick was low and the Hornets took a 14-6 lead into intermission.

The second half was a different story as the Hornets’ offensive line opened up some big holes as Campbell, Skyler Whiting and the rest of the Hornet runners picked up big chunks of yardage.

Campbell scored from the Staunton 16, dragging tacklers with him into the end zone.

On a similar play later in the third quarter, Campbell again bulled into the end zone from 15 yards.

In the fourth quarter, Whiting burst through the line from 26 yards out to score with 9:54 left and with reserves filtering in from both teams, freshman Brayden Tyree scored from the Staunton seven on a perfectly executed Statue of Liberty play for the final touchdown.

“They (Staunton) are tough and well coached by Jake (Phillips),” Bugden said. “They have a bright future.”

Indeed, Staunton is young with 18 sophomores and four freshmen on the varsity roster.

Wilson now awaits a possibility to add a seventh game next week if a suitable opponent can be found.

Wilson Memorial’s Noah Campbell carries the ball for the Green Hornets on Thursday against Staunton in Fishersville.

Wilson Memorial’s Derek Wakefield is taken down by Staunton defenders Thursday in Fishersville.